6 Books to Read This Holiday Season What books really stood out to you this year? If your answer is a whole lot of blank space, then look no further. Our list of curated titles has something to suit everyone’s taste, from thought-provoking thrillers to illuminating non-fiction.  Here’s to some time-worthy escapism in the hustle and bustle of the holiday season! 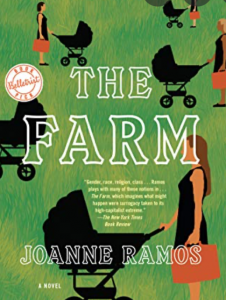 How does the idea of a luxurious retreat, complete with organic meals, personal trainers, daily massages, and meditation in Massachusetts’ Hudson Valley sound? Now what if you’re told this retreat is all for free, AND you get paid a huge salary to spend time here? Does this all sound a little too good to be true? Well, here’s the caveat – the cashmere-clad participants at this decadent resort must sign a contract for a length of nine months…and deliver a baby at the end. Welcome to the elite baby farm for the world’s uberwealthy, where selected surrogates bear perfect babies for their mega-rich clients. As the narrative begins, we meet Mae Yu, a high-achieving Harvard graduate hell-bent on achieving the most premium and profitable surrogacy program for her investors, and Jane, a new Filipino immigrant struggling as a single mother. Other interesting characters are sprinkled in between, including Reagan McCarthy, an Ivy League rebel looking to escape the confines of her meticulously planned, gilded life. A novel that explores the themes of race and the wealth gap through the lens of a dystopian surrogacy program that feels a little too real for comfort.

The End of October It’s as if Pulitzer Prize winner Lawrence Wright had a crystal ball when he wrote The End of October, a fictional novel about a devastating virus that appeared in an internment camp in Indonesia and burned through the world, bringing modern society to its knees. Written before the onset of COVID, The End of October is “an eerily prescient novel” as quoted by the New York Post. With meticulous research that invokes the storytelling magic of Michael Crichton, Wright takes readers on a whirlwind journey through a pandemic of modern proportions, and narrates with terrifying clarity how easily a deadly virus can permeate the globe in a matter of days. The story opens with epidemiologist Henry Parsons, who, on behalf of the WHO, tracks the virus through Indonesia, then to the Hajj in Mecca during the revelry of Holy Month, where one vector in the crowd plants the seed for a global pandemic. The novel takes readers on a white-knuckle ride as governments are thrown into chaos, street riots break out, global transportation comes to a halt and politicians wrestle with the blame game, and there’s a possible biowarfare attack that could launch a nuclear war between the Superpowers. There’s also plenty about panic buying at grocery stores and a mad scramble for supplies. Sound familiar? At least we can breathe easy that COVID isn’t as deadly as the fictional virus depicted in the novel, although it’s still hard to catch our breath in this new COVID world.

The Beekeeper of Aleppo 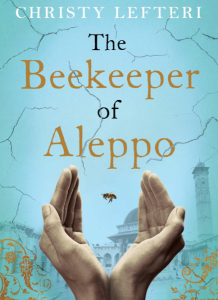 A sorrowful yet beautifully written testament to the Syrian crisis, The Beekeeper of Aleppo is, at its heart, a story about the triumph of the human spirit over immeasurable loss. Beekeeper Nuri lives a simple life with his wife Afra in the historical city of Aleppo, when the unthinkable happens and everything they’ve treasured and loved crumbles against the violent backdrop of bombs and machine gun fire. Their lives, as they know it, is left in total shambles. Afra is blinded by grief, but Nuri’s determination to survive pulls the family through the Syrian refugee trail to Europe, first in a smuggling caravan across the border to Turkey before braving the waves on a blow-up raft to Greece. The goal is to reunite with Nuri’s cousin, Mustafa, in England, so they can rebuild their lives on greener pastures with their beloved bees. The novel takes readers on their harrowing journey through a daring escape out of Syria, to a dangerous predatory refugee camp in Greece, and finally to the nerve-wrecking limbo of a refugee asylum in England. A beautifully poetic novel about loss and rebirth, the story brings the Syrian crisis to life with a deeply personal, human touch. 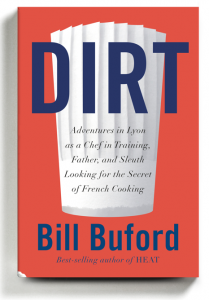 A hilarious, witty culinary journey through one of France’s most celebrated gastronomic cities, Lyon, as told through the characteristically self-deprecating humor of author and chef Bill Buford. Uprooting his young family, with three-year-old twin boys in tow, from their comfortable life in New York to an entirely different continent without knowing a lick of French, the former fiction editor of the New Yorker and founder of literary magazine Granta originally planned for a six-month sojourn to the cradle of French fine gastronomy. Five years later, Bill has apprenticed at Lyon’s finest boulangerie, studied at the legendary L’Institute Bocuse, and cooked at renowned Michelin-starred La Mère Brazier. The memoir takes readers on a spell-binding journey through the unforgiving kitchen culture of Lyon, and offers almost a visceral taste of the rigueur of the professional French kitchen. And oui, there’s plenty of luscious descriptions of fine cuisine, so be prepared to be very, very ravenous. It was just supposed to be a social and ecological experiment, the world’s first zero-waste, zero-emissions, self-sustaining, off-the-grid community tucked away in the deep woods of the Pacific Northwest. Greenloop, the brainchild of a tech executive and his supermodel-slash-wellness influencer wife, is a smart homes community powered by sunlight and waste. Teslas and vegan menus are the standards here, but as the dust from nearby Mount Rainier’s eruption settles, a different kind of reality arises. Narrated partially from the “found” journal of resident Kate Holland, a tale of horror and survival materializes that blurs the boundaries between truth and fiction. From the New York Times bestselling author of World War Z, comes a cryptozoological tale like no other. Along with social satire and brute violence, the story unfolds with breath-taking escalation into chaos, and makes us question how easily our seemingly impenetrable societies can crack under the force of sheer, animalistic brutality. After all, even vegans are primed to kill when food scarcity arises, and you can’t exactly namaste your way out of ferocious, bloody attacks. Devolution taps into our inner, most primal fear of what lurks in the forest beyond. 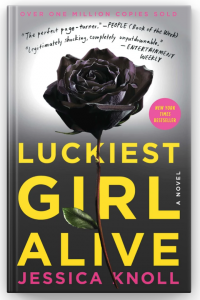 Ani FaNelli seemingly has the perfect life – a glamorous job at a coveted women’s magazine, an enviable wardrobe, and a handsome, successful fiancé from a very blue-blooded, high society family. There’s just one tiny crack in the flawless armor of her life…well, one little secret that could tear down her carefully orchestrated image. As the psychological thriller unfolds, we are taken back to the days of a younger Ani at the prestigious Philadelphia-based Bradley school, and given a glimpse of the long-term impact of emotional trauma. Why is Ani trying so hard to reinvent herself? What is she running away from? What lies beneath the pretentious, callous veneer of the girl everyone loves to hate? The debut novel of Jessica Knoll, who is a senior editor at Cosmopolitan and an articles editor at SELF, the “Luckiest Girl Alive” film rights were optioned to Reese Witherspoon’s Pacific Standard production house and Mila Kunis has recently been commissioned to bring the character of Ani to life on Netflix.