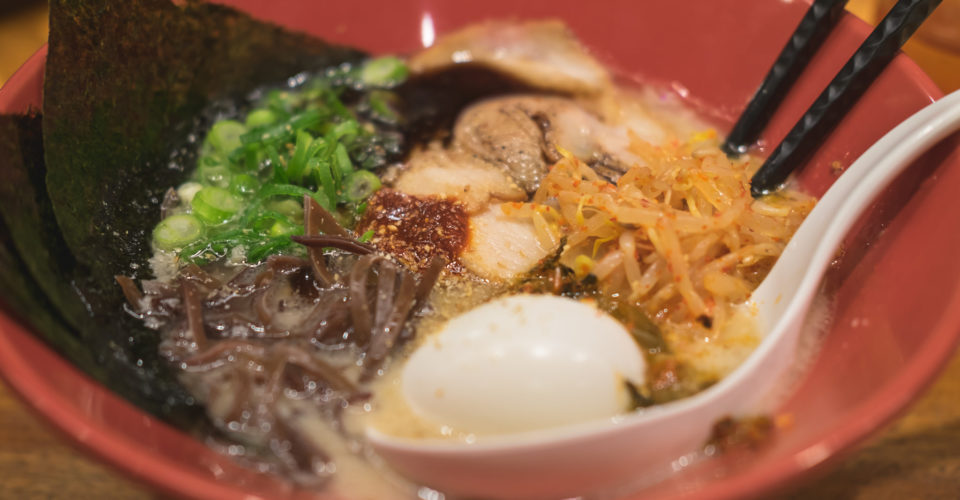 If we could have it our way, every day is the perfect day for Japanese ramen. Read on to discover our favorites, from classic tonkotsu broth to more adventurous options. Ippudo first opened in ramen capital Hakata in Kyushu in 1985. Since then, it has grown to become the largest ramen chain in Japan, boasting over 100 locations from Hong Kong to New York City. There are different thicknesses of noodles on offer, from paper-thin to extra-thick, according to Hakata traditions. The broth’s rich creaminess is the result of different pork bones being cooked via a series of complicated techniques. Choose from among a number of bowls, from the spicy “karaka” to the mild “shoyu”. Each bowl comes with slow-roasted pork, boiled egg and seaweed, in addition to other toppings. (You can add on extra toppings, too.) Watch out for seasonal and experimental creations too, such as the black garlic “kuro” bowl and uni bowl that’s chock full of uni and salmon roe. Butao Ramen made waves when it first opened in Hong Kong in 2010; its hole-in-the-wall, street-side location and daily limit of 200 bowls resulted in queues that snaked around the block. Now, it has five locations throughout Hong Kong and an increased daily limit, but the queues are still strong. Choose amongst four different bowls: the Butao King (tonkotsu pork bone broth), Black King (tonkotsu black squid-ink soup), Red King (spicy miso broth) and Green King (basil, pesto, and Parmesan cheese). Once that’s done, you can choose your noodle texture, broth intensity, and toppings. If you prefer to approach your ramen a little more delicately — if such a thing is even possible — then tsukemen (dipping ramen) might be for you. At Shugetsu, which opened to great aplomb in 2015 and has expanded with a second location in Quarry Bay since, thick noodles are served separately on a plate with a soft-boiled egg, while the shoyu broth sits in its own bowl. Dip a bite of noodles and toppings into the broth for a more leisurely meal. The flavorsome broth is created from sardines, mackerel and kelp. The world’s first Michelin-starred ramen joint, Tsuta opened in Tokyo in 2012 and landed in Hong Kong earlier this year, following openings in Singapore and Taiwan. The 20-seat ramen bar takes an unconventional approach to its noodles, utilizing ingredients such as truffle oil and green olive puree. The innovations continue with its shio (salt-based) ramen, which incorporates red onions and mint. Its other two broths — shoyu and miso — are more traditional, with the shoyu broth created by simmering whole chickens, seafood and different kinds of soy sauce and herbs. Char siu and egg top off the bowls. Tsuta’s servings are limited to 400 bowls per day. There’s a reason why Ichiran set a record for longest continuous queue (240 hours, when it opened its Taipei branch) — its pork bone dashi broth and secret spicy sauce pack a serious flavor kick. Eating at Ichiran is a uniquely individual experience, from the completely customized ramen bowls to the single-person booths that have become somewhat of an Ichiran signature. The best bit? Its Wan Chai location is open 24/7, meaning you can get your ramen fix literally whenever you want. The first branch to open outside of its home base of Osaka, this ramen joint is a little different from the rest: it does a slow-simmered, rich chicken broth instead of pork bone, and adds burdock root to the usual pork and soft-boiled egg for extra crunch. There’s also tsukemen, or dipping style, ramen for those who prefer that method of slurping up your noodles. Side dishes like deep fried chicken are available, too.