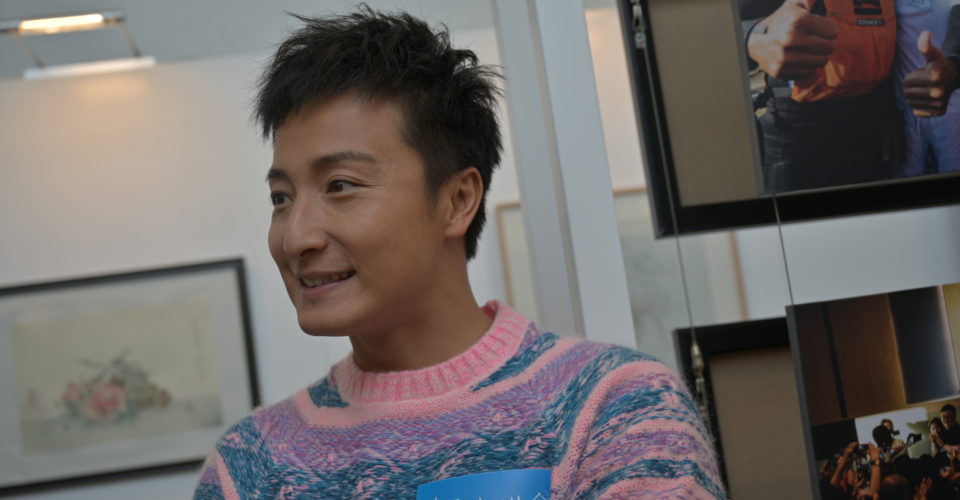 Olympic athlete and pop star are two careers that are impressive enough in themselves—Hongkonger Alex Fong has done both. He first represented Hong Kong as a swimmer at the age of 11 and went on to compete at the Sydney Olympics in 2000. After retiring from swimming, he went on to become a Cantopop star and actor.

Last November, however, he revisited his first love and added yet another feather to his cap—swimming around Hong Kong Island for charity, completing the 45km journey in a record-breaking 10 hours and 38 minutes and raising over $7 million for charity A Drop of Life, which delivers clean drinking water to people in need. In December, local and international artists alike showcased works that celebrated Fong’s accomplishment at the exhibition Perspire to Inspire.

We spoke to Fong about his charity swim and about the one-year anniversary of the swimming school he founded, the Hong Kong Swimming Academy.

The idea of swimming around Hong Kong Island was completely initiated by me. I wanted to do something sensational, challenging and meaningful enough to draw people’s attention and raise funds.  As I am a former swimmer, even though I have been retired, swimming is still my greatest talent. I thought it would be meaningful for me to use my talent to help people in need. And as a local Hongkonger, I thought the route would be even more meaningful since I would be swimming around my home. And the distance is even longer than a full marathon!

At first my goal was to finish within 12 hours in order to break the 12.5 hours of the former record holder. I didn’t imagine I could do it under 11 hours. It was a perfect outcome.

Since I hadn’t gone swimming for 15 years, when I took my first swimming lesson in June last year, I could only swim 400m—which grew to 45,000m in the end. Also, my muscle endurance was weak so I had to train constantly. It actually felt quite lonely as I was training alone—sometimes in the morning, sometimes at night. But although the process was boring, having a goal motivated me to keep moving forward.

Looking back now, my goal was quite hard to achieve. I kind of overestimated my swimming ability and underestimated how difficult it would be to swim in the sea. Therefore, when I was swimming in the sea instead of the swimming pool, I encountered situations such as dehydration, seasickness, and eye infections because of the water pollution. But all of these difficulties helped me to better prepare for the swim, so it went pretty smoothly on the challenge day. It was really tough, but I never thought about giving up.

I never considered starting a swimming-related business before, otherwise I would have done it 20 years ago, right after I retired from my professional athletic career. My focus was always in entertainment until last year, when my friend persuaded me to start the Hong Kong Swimming Academy. He said that it wasn’t about making a profit, but providing an educational opportunity for children. I think he was right.

After I was selected as one of the recipients of Junior Chamber International Hong Kong’s prestigious Ten Outstanding Young Persons award in 2014, I felt that I had a responsibility to bring positive messages to the people around me—especially young people. Being a professional athlete helped shaped my character and taught me about sacrifice, perseverance and modesty. These are traits that I hope children can learn in our swimming courses as well. Besides regular swimming courses, sometimes we bring students to do charity work such as visiting special needs schools or cleaning up beaches.

Business at the Hong Kong Swimming Academy is getting better now that it’s been open for a year. In Hong Kong, the most difficult thing about opening a new swimming school is finding the right venues. But now we’ve started to have long-term cooperation with some schools, that’s improving. On the other hand, it’s difficult to balance our income and expenses, as there are high and low seasons for swimming. During some months we make a profit, but during others we don’t. But overall me and my partner have faith in the business, and the most important part is the satisfaction we gain from seeing students learning how to swim through our school.

Looking to the future

I hope to spend more time trying out different work in the entertainment industry, such as participating in movies and dramas. And as for the Hong Kong Swimming Academy, there will be a swim team for kids aged six and above, with the aim of not only teaching students how to swim, but how to participate in school competitions even represent Hong Kong in the future.

More from our Point of View series.