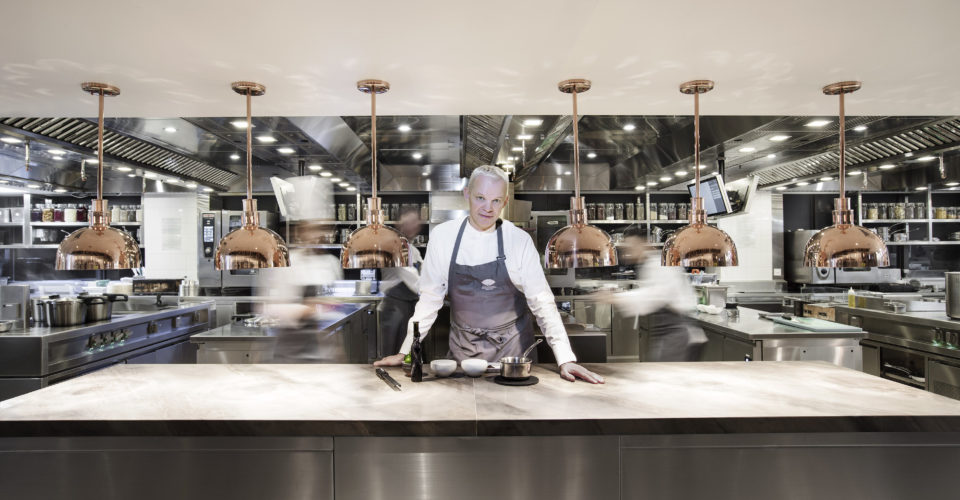 The recent re-opening of newly revamped Amber Restaurant at The Landmark Mandarin Oriental Hong Kong has brought culinary director Richard Ekkebus to a new realm of craftsmanship. Here’s what chef Ekkebus has to say about the new direction for the former World’s 50 Best and two-Michelin-starred fine dine.

Have you always thought of becoming a chef?

As a boy, I didn’t think of becoming a chef. Living in a small seaside town in Holland, I grew up helping my grandparents who ran a hotel and a restaurant. Whenever we went to my grandparents, it was all within the environment of the business – helping in cleaning or peeling things, and a great bonding moment with my nephews and cousins.

In university, I studied engineering and worked at a restaurant on the weekends. Soon, my schooling became secondary and my work at the restaurant became primary. I became a full-time chef and never looked back. My mother was a bit more open-minded about it but my father didn’t like me going into hospitality. He knew the nature of the F&B and hospitality industry.

Even before I was traveling professionally, I had been fortunate enough to travel to several countries before I reached the age of 18. This exposure to different food cultures has made me better understand what has been going on in different parts of the world. Professionally, for one, I was keen in going to Mauritius – a melting pot of cultures with the infusion of Indian, Chinese, and even western influence made it a great place for me to learn other things than I had learned in Europe.

Did you expect to be where you are today?

I didn’t think I’d ever go back to Holland, for whatever reason. It was never something present on my mind – the need to go back home. Every opportunity that I took on was with a sense of adventure and not so much on where it was going to take me next. It was an opportunity to learn, to understand, to gain skills. I was never afraid to make that move.

It has never been an issue for me to leave my hometown. If I want to leave Hong Kong, I’m able to do so because I have a super flexible mindset. All I have to bring with me are my knives because my recipes are accessible via the cloud. That’s the great thing about being a chef. You can work in any part of the world as long as you are willing to adapt, anywhere you go. That’s the key.

How did you come up with 50-plus new dishes for the new Amber?

We came up with over 50 concepts and dishes. But in the test kitchen, some didn’t make it because some were not good enough for me. And even after the re-opening, they’ve also evolved. Food shouldn’t be set in stone. The whole purpose of reinventing Amber is to make sure that we’re getting ready for the next generation. There are restaurants in Hong Kong that I refer to as “museum restaurants” where they never change and are set in their ways.

Since the opening of Amber, it has grown on people and vice versa. On a personal decision, if I continue to work for Amber for the next 15 years, I’ve had to ask myself whether I’d continue to have the “same-old, same-old” mindset or would I challenge myself. I like not to be complacent. If we’re going to make guests happy, the person who drives the whole business needs to be extremely happy.

How do you balance the accolades of your accomplishments while staying grounded?

Staying grounded is simply part of my character and the values that have been instilled in me by my parents. Since we live in a town below sea level, we’ve had to constantly struggle with the sea.  “Luctor et emergo,” is a quote that basically means I struggle and I will come above. My grandparents have had their house swept away and some of my family members drowned. That constant struggle helps you stay grounded.

Amber is not where we want it to be as of yet. We don’t want to be perceived as trying to do things just to make a difference. The most important is to create an indulgent experience.

Amber is a curious restaurant because I’m a curious person – always wanting to learn new things. We’re not serving on trends. Oftentimes, we’re trendsetting. But it’s not to say that we’re surfing on the trends, no.

Much has been written about Amber’s latest menu of no dairy as a health conscious kind of thing that reflects the guests’ dietary needs. Rather, the main reason for creating these new dishes has been to bring forth brighter flavors and to create a level of lightness.