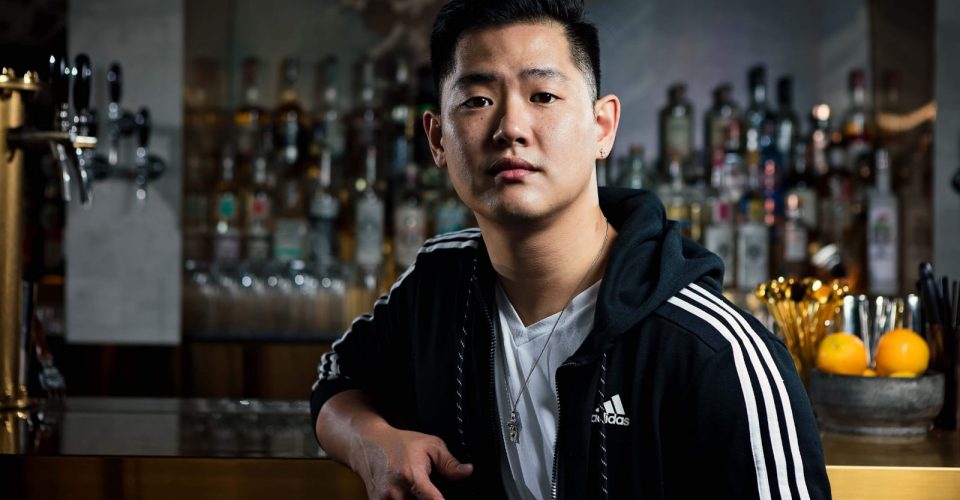 Over the last years, Daniel Eun has quietly been making a name for himself on the bar scene—both here and in the US. The first head bartender of New York City’s Please Don’t Tell (PDT), he was instrumental in turning the bar into a global icon. Later, he went home to Los Angeles to help open The Varnish, which went on to gain acclaim for its elevated craft cocktails. After working with a slew of other much-lauded bars in the US—including The Normandie Club and The Walker Inn—Daniel set his sights on Asia and now has several ventures in Hong Kong, including the recently-opened OBP.

Alongside Esdras Ochoa, he developed 11 Westside in Kennedy Town, one of the city’s go-to for quality tacos, and was the driving force behind the adjacent drinking hole, The Wilshire Bar. Now, several years after that opening, Daniel decided to bring a slice of his Korean heritage to Hong Kong in the form of OBP. We talked to Daniel about creating quality cocktails, developing a restaurant and bar in a global pandemic, and why Hong Kong needed a touch of Korean drinking culture.

How did you get into the drinks business?

My answer to this question seems to evolve as time goes on—which probably means I didn’t have a singular moment that led me to decide to start bartending. I do know that getting back into the business after a brief foray into only practicing law happened after giving myself one of those “where do you see yourself in five years?” conversations. After a good 40 days of self-evaluation, I knew I wanted to be a bar owner. Every career decision from that point on was in pursuit of that dream. That was six years ago, so I guess it’s worked out so far.

What do you think makes a good cocktail?

A good cocktail is probably just one someone somewhere appreciates. A great cocktail is much harder to achieve. It needs to be balanced, but unique. Nostalgic, but new. All while somehow not coming off as precious or pretentious. A lot of good cocktails are probably sacrificed in the pursuit of a great one.

Where do you find inspiration for creating your cocktails?

As cliché as it sounds, inspiration can and does come from anywhere. It could be something from childhood, a new flavor discovered while out in the market, a song, an event in history, or anything else. It took me awhile to learn that creativity is a skill that can and needs to be developed—so I guess by constantly looking for inspiration, I find it?  These days, I spend a lot of time tasting at research and development sessions with younger bartenders where they come up with all these crazy new ideas.

What’s your process for creating a drink?

Each drink is different, but I now take more time than ever in the pre-stages. It’s a lot of mapping out ingredients, tasting different flavor combinations, laying out a framework for the menu and seeing what holes need to be filled, researching different techniques, then making sure no one else has done the exact thing before. After a week or two of brainstorming, I’ll start tasting and see if it works and tweak from there. Then I’ll usually walk away for a week or so to give myself some distance; test again; rinse-repeat.

What do you consider to be the standout moments of your career?

There was a guy who used to come into the bar by himself almost every other day right when we opened, around 6pm. He would get a neat pour of whisky, drink it, pay the bill, and leave. He had the “don’t approach me” vibe, so it was more of a silent interaction between the two of us; him enjoying his 15 minutes with his whisky, me usually finishing up prep or wiping bottles or something. Over several visits to the bar, his walls slowly came down, I learned he worked at a bank nearby, and this was his breather before heading back to the office. One day, we were a little busier during open than usual, and he leaned over and asked, “Hey, what’s up with those cocktail things?” A few more visits later, he was bringing friends in to share his new favorite, gimlets.

Another time, there was a random person at one of the first trainings I ran at a bar I was managing. I was confused as to who this late addition was, but was told later that she would be our host/server and had experience at one of the busiest restaurants in the city. At the end of her first shift, she cried because she’d been overwhelmed—she confessed that she’d never held a tray before; I’d totally overhyped her experience at said restaurant, and she wanted to make sure we didn’t have unrealistic expectations. Flash-forward three years and she had my old job and was the General Manager until the pandemic shut them down.

There are countless other moments that I look back on as standout moments, and they all involve people and seeing them succeed.

You usually split your time between the US and Hong Kong. What have you noticed about the drinking culture and bar scenes in both places?

People love drinking! But, more than that, people crave community. 2020 made that so much more evident than before.

How did the idea for OBP come about?

I just stole everything I loved about going out in Korea and Koreatown and threw it together.

You’re also part of the team behind 11 Westside/The Wilshire Bar in Kennedy Town. This is a very different experience. Why choose to go in this direction?

I love cocktails and I love tacos, but I’m a Korean American kid from Los Angeles. That experience is such a huge part of my life, and it always felt weird that there was a wall separating those two lives when it came to my professional life. I wanted people to experience that same joy I have walking into my favorite soju spots. Also, I needed an excuse to have Korean food for our family meal every day. It was ultimately a pretty selfish move.

You developed and opened OBP in the midst of a pandemic. What were the biggest challenges (or opportunities) you faced?

Thanks to the pandemic, I spent an abnormal amount of time in LA over the last year. There was an opportunity to reconnect with that community and spend a lot of time “researching” while I was there. The other opportunity—which might be weird to say—was that we got to have a proper soft opening. It’s often hard to have an organic soft opening in Hong Kong because the city moves so quickly.

But, having to deal with restrictions also meant that we were also not going to get overwhelmed before we were ready—it allowed the team to gel and for us to troubleshoot a lot of issues while serving a limited number of guests (and limited party sizes). Obviously, I would love to be busier, but that’s the silver lining I want to focus on.

Because of the pandemic, you were stuck in the US while developing OBP and had to do a lot of things remotely. What was this like?

Thank God for the internet for making this even possible. There were many, many video calls where I had my partner, Jon, moving through the space for me so I could pretend I was there as I drew out plans for the bar. I would literally have him tilt his phone up and down while standing where we imagined the bartender would stand to see where the sink should go, and then side to side to see sightlines, for example.

A lot of it was trusting him to make things pretty, which he always does, and the contractors to get it right. I definitely helped that this wasn’t my first time building a bar in Hong Kong; I probably wouldn’t have been able to do this if it was my first go-around.

How did you develop the drinks list at OBP? Where did you draw inspiration and what was the creative process like?

I felt an inordinate amount of pressure with this menu because it was my first time really doing something “Korean.” I wanted to make my people proud—even though cocktails were probably going to take a back seat to the overall beverage offerings here at OBP. I incorporated and highlighted as many Korean ingredients and flavors as possible, while keeping the general experience in mind. I was excited to play with balance in a different way than American cocktails tend to skew, but that meant most of my established ratios didn’t work in the same way that I’ve grown accustomed to.

The creative process was mostly me going on wild tangents about Korean things and having people rein me in and say, “Okay, so what do you want in the glass?” As someone who is usually the one structuring creativity, I needed someone else to step into that role for me and literally just write down on paper all my random thoughts so we could approach things systematically. But yeah, the pressure was—and still is—pretty immense.

How did you develop the food menu and decide what to pair with the drinks?

Can I cop out and just say we hired the right chef and trusted him and his team to get the job done? I think they did an incredible job, and they continue to improve as we gain experience and time in that kitchen. The menu did go through a lot of changes from its first inception, though—there are at least 20-30 dishes on the cutting room floor. Some may come back in the future, but many won’t. Not because they weren’t delicious, but because we lost focus halfway through the pre-opening because we were all so greedy and we all had this gaping hole for more Korean things in Hong Kong.

We had a moment where we all sat down and had to tell each other that we couldn’t be every Korean restaurant for every Korean person. We had to focus our menu, and we figured that we’d had a vision for this place before we ever turned on a stove, so we should at least try to execute that first.

Luckily for us, Korean food has an entire category meant to be paired with drinking called “an-ju” (안주) (in Chinese: 按酒), which is literally food for alcohol. So that’s where we focused our attention. Every dish is meant to complementary to the drinking experience.

What do you hope guests will take away from their experience at OBP?

We want people to have fun and be happy here. As long as that’s happening, we’re doing our jobs.

Maybe a new cocktail menu for 11 Westside? Each one is more ambitious than the one before it, and this one is very personal to me, so there’s a lot of my energy and attention going into that. In terms of new venues, there’s nothing concrete yet, but there are a lot of ideas in our collective think tank.

It really comes down to finding the right spaces and then getting the team together to execute the concept we feel best matches the space—this is actually the third space we seriously considered for a Korean spot. But first, I just want to see OBP fully realized without dining restrictions.