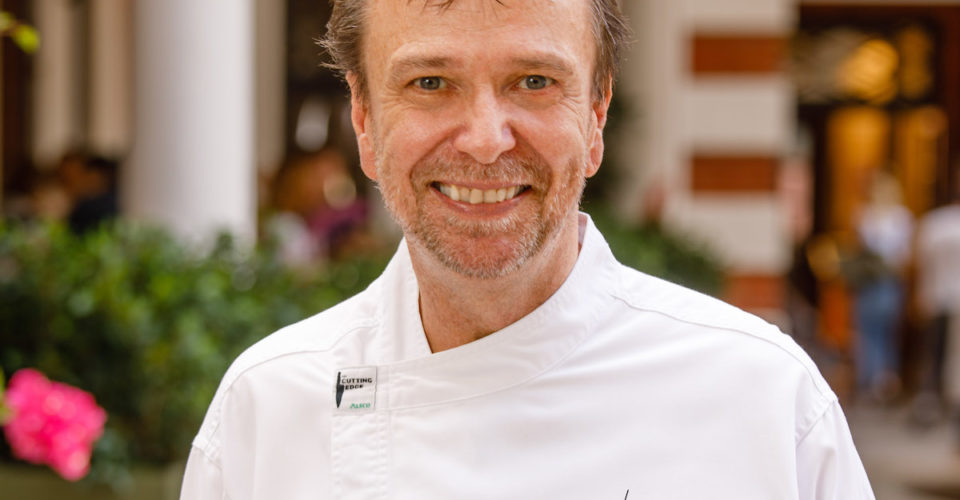 Having been based in Bangkok for 30 years, award-winning Australian chef David Thompson is widely considered a leading authority on Thai cuisine. He opened his first Thai restaurant in Sydney in the 1990s, but it wasn’t until he opened Nahm at The Halkin hotel in London that his career began its meteoric rise.

The restaurant was awarded a Michelin star within just six months, the first of its kind to earn such an accolade. Thompson stayed at Nahm for 18 years, opening a second branch in Bangkok, before leaving to focus on a new restaurant, Long Chim, and a number of other new projects, last year.

Among these was his first restaurant in Hong Kong, Aaharn, at art, heritage and dining hub Tai Kwun.

What originally brought you to Thailand?

A holiday led me to Thailand in 1986. I was seduced by the country, the culture, the cuisine and the people — so much so I decided to live there. Of course, living there was entirely different from the happy holiday I initially had. It was tough. I wasn’t that fluent in Thai to start. But bit by bit I started to feel at home. I have lived in the Kingdom on and off since then.

When I moved there, I had the good fortune to meet a cook who transformed my understanding of Thai food. She cooked with an inherent skill. Her definition of flavors, textures and seasonings was outstanding, mesmerizing. I was hooked.

What are your favorite things about Thai food?

I love its sophistication. It is so much more than a green curry or a pad thai. It is a venerable cuisine with a depth of flavor, elegance of seasoning, and vast repertoire that is utterly beguiling.

What are the most common misconceptions about Thai food?

Thai food is not just about chillies, curries and spice. It is a subtle cuisine and a highly complex one. The gentle soups, the sprightly salads and luscious desserts display the other tastes and dishes that play integral roles in a Thai meal.

Professionally, I love working with good ingredients. Without them, no cook can cook. I think one ingredient that flows across the cooking at Aaharn is fresh coconut cream. We use it in curries, soups, salads, relishes and desserts. It is rich and luxurious and gives an incomparable taste and succulence to everything it is used in.

I confess I love sweetness. The palm sugar we use is addictive. It comes from the south of Bangkok and is pure and untouched by additives. I eat it by its fudge-like self — I told you I was addicted. We use it in our mussaman curry and in a sweet, sour and spicy sauce that coats some deep-fried fish.

At home, I have a weakness for noodles. Rice noodles in particular — wide, tender and glistening. I love them stir-fried with soy sauce, garlic and pork, or in noodle soups with fish dumplings. But I am also partial to fried rice. Easy food, simple food.

This is your first restaurant in Hong Kong. What made you decide to open a restaurant here?

I have always liked Hong Kong. Who doesn’t? I love its raffish charm. I like walking along its crowded streets and up and down its stairs, stopping at BBQ shops or noodle places. I feel at ease here. Bangkok’s home, but Hong Kong is a great place to eat.

The opportunity arose to have a place at Tai Kwun. A beautiful building in a fantastic development, and a perfect platform for our new restaurant.

How has working within Hong Kong’s dining scene been different compared to elsewhere?

There are just so many restaurants here! And the diners are very discriminating. They certainly know what they like. With so many choices, we really must be at the top of our game.

It has taken me several weeks to appreciate the preferences of the Hong Kong palate: rich and rounded tastes with no fear of spice. And so the items on the menu — current and upcoming — reflect that.   I don’t alter the taste of dishes, as I try to be as faithful as possible to the cuisine. But I am judicious in my choice of dishes that pop up.

What do you hope to do with Aaharn next?

There is only one Aaharn, and I want it to be the best restaurant I have. It is as simple as that.