Dishin’ the Dirt: Caprice’s Guillaume Galliot on Michelin Stars and a Global Career 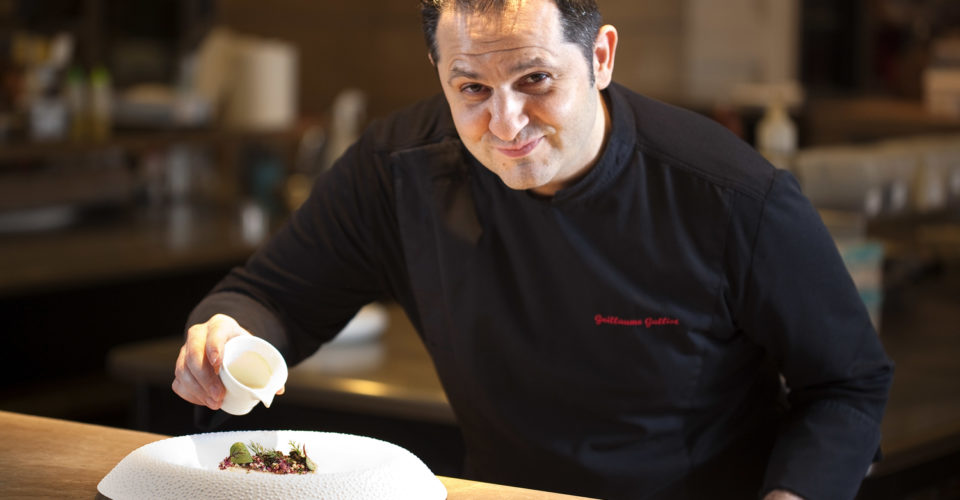 Growing up in a family who know the F&B business, Guillaume Galliot knew from a young age that he wanted to become a chef. After pushing to learn to cook his own meals at 12, then taking on a stage [apprenticeship] at 15, Galliot finally went to train with the famed Pourcel Brothers at their three Michelin-starred restaurant, Jardin des Sens, at 19.

Since then, his career has taken him to exotic locations like St Barthelemy in the Caribbean; the Raffles Hotels in Beijing and Singapore; and a six-year stint in Macau. In 2017, he took over the kitchen at Caprice, the French fine-dining experience at the Four Seasons Hotel Hong Kong. In just 18 months, Galliot has recovered Caprice’s coveted third Michelin star — but if he’s got anything to say about it, he’s just getting started.

Very early. My mother was working in the business as a sommelier. My uncle was a sommelier in a famous two-star restaurant in the 80s in Paris, so there was always food and drink around me. Then when I was 12 and going to school, the food was very bad and I told my mom I wanted to buy products  at the weekend so I could cook for myself. We were living 50 meters from school, so it was very easy to come home, cook, and go back to school. So I started cooking very simple dishes for myself, you know, pasta, steak, crepes, these kinds of small things. And that’s how I started, by cooking for myself at 12 years old.

Later, I told my mum I really wanted to go into cooking, so I asked if I could do a stage. Usually, you need to wait until you’re 16, but I managed to find a stage, so for two years I did three weeks [with a chef] and one week at school. And then I had to pass the exams, which were the same as the people who had been in school full-time. By then, they had more theoretical knowledge, but poor kitchen knowledge, but for me, the theory was not bad, and I had good practical experience. So I took the exams, and then started to work in restaurants.

To you, what makes a great dish?

Mainly good products. The best products you can find. It could be a sardine or Kagoshima beef or whatever, but the best product. Then you need to use the best cooking method, the best seasoning, and the best sauce.

So sauce is important?

Yes. I would say it’s 60% or 70% of the work. Of course the product is important, but if you have good product and a bad sauce – or no sauce! – you will not bring out the best flavors of the product you’re cooking.

I have a lot! Salt…vinegar…truffle. It depends on the season and my mood. When I reach summer I really love working with tomato, in winter, truffle, and in autumn, mushrooms. Each season has so many items to offer, but if I had to choose something that I love all year round that I can’t live without, it’s salt and vinegar and butter. Stuff that adds flavor and is the base of everything. 10 years ago perhaps I didn’t realise how important this was to extract the flavour of the ingredients.

You trained with Jacques and Laurent Pourcel at Jardin des Sens – do you think you picked up any tips and ideas for running a three Michelin star restaurant from this experience?

In a way yes, but I was very young. I was 19 when I was working from them. [Working with them] helped me a lot in developing my knowledge about organization, because [we worked as] a big brigade, we had 35 people. So it’s more on that side I developed. But [I also learned] different techniques. The south of France had a lot of olive oil and butter, which I hadn’t really worked with much before. Maybe unconsciously I [also] picked some things up during my time there, which helps me create really unique dishes, like techniques or something, but I don’t know!

Why did you decide to leave France?

There are many reasons! I had just become single, and I was young. And when I was working for the Pourcel brothers and doing some demonstrations for them in Singapore and Montreal, I really enjoyed it. I thought it was really cool, and I saw a very different way of working, and different products they were working with, and I was very curious.

The chef de cuisine at Jardin des Sens at the time was a French guy who left France when he was 18, and when he was in our kitchen he was 38 and talking about living in Mexico and all these other places, and when we had trainees in the kitchen, he would talk to them in English, in French, in Spanish…I was very impressed. The Pourcels met him in Cartagena [Colombia] and brought him over to France, and he has so many things to bring to the kitchen, including techniques and an open mind. He was so inspirational with all the cool stuff he did, and he always had these amazing stories to tell! And on top of that he was very brilliant with the knife and the taste.

And one day, he found me a job in St Barthelemy. The Pourcel Brothers were like, “Are you sure you want to go?” And I said yes, absolutely! So I went. And then later, Thierry called me again and said that the Raffles in Singapore was looking for a sous chef and that I should go to Asia. So I said of course, yeah, why not?! So I went to Singapore at 23.

You did some work with pastries with the Pourcel Brothers – how did this affect your approach to food and cooking?

It made me a bit more refined. I’m a bit more precise in the kitchen because of it, and I’ve been able to develop new ideas and recipes. And now for pastries, I prefer to have a bit of seasoning that I would normally use in the kitchen. So instead of having a lot of sugar, and being very sweet, I like to have a well-balanced pastries. When they’re too sweet, I don’t like it.

You’ve worked in Singapore, Morocco, China and the Caribbean, as well as France. What did you learn from these global experiences?

All the different cultures, products, and spices. When I was eating in Morocco, it was different. [I was] tasting all these different spices and as a chef, your brain starts working, and you keep the memories of each food, each spice, each smell. So when you’re in the kitchen later, when you start cooking something, you start to reach into your memory, and you remember you had this dish in Morocco that was quite impressive, and you start to order the products and spices. So my style of cooking is travel cooking based on French food and techniques, but incorporating from all my different experiences. So I start from French ideas, and use my experiences to create my own ideas and dishes.

Why come to Hong Kong and Caprice?

First of all, this restaurant is an institution. Even when I was in Beijing I’d heard about it, and when I was in Macau everyone was talking about it. So I used to come as a guest, and saw the brilliant food, the brilliant service. And in 2013, the chef came to eat at my restaurant in Macau, and he was three [Michelin] stars but I was one star at the time. He was planning to leave, and he asked me if I was interested to take over his position. I said no. I wasn’t interested because I wasn’t ready, so I refused.

So another chef took over, and in early 2017, I heard that this chef was leaving. And somebody asked me again if I wanted to consider taking over. And at that point, Caprice was two stars, and I had also gained two stars, so then I thought, yes, I will do it. I was looking for a move from Macau after six years. So it worked then. The first thing I asked was are you rushing to get the three stars, but they said no, as long as the guests and staff are happy, it’ll come naturally. They knew I wanted to go for three stars. Since I was a kid, it was a dream.

What do you believe it took to take Caprice from two Michelin stars to three?

Well, most of the time it’s mainly the dishes. After that, it’s the team. Everyone has to click. You can serve the best dishes, which we try to do, but you have to have the right team. You can’t get three stars if you don’t have the food right, but we needed the right attitude from all the staff. We had a lot of turnover in the first 18 months because we needed to put the right team together. The first eight months was hiring and changing the team, finding people who would agree to do my style of cooking.

We created our dishes, our style of serving, our way of treating people when they arrive. Our idea is to please everyone, not just our friends or family…we want to make everyone feel like friends and family. We want to make everyone feel at home and happy. So the food has to be right, but the team has to be right, too. You can’t have a negative environment.

What’s your vision for Caprice?

More new creations. Keeping the same standards. I really want to keep the same standards. You know, some restaurants exist for a long time, like in Paris, and I hope Caprice will be the same. That we continue to be an institution in Asia and the world, but keeping the right people, cooking the right food, and keeping the same guests. It was already a well-known restaurant before I arrived. So I just had to come with my bag and cook my food, and we changed some important people in place, but I wanted to continue the legacy. People come here for important occasions, birthdays, anniversaries and I want them to enjoy it.

What do you hope diners at Caprice take away from the experience?

I want the diners to come for an experience, and also for an assurance. I want them know that they’re going to eat well, get good service and that they’ll have a good time. That’s my priority. I personally have a lot of restaurants that I go to because I know I’m going to eat well – there are plenty of other restaurants out there to try, but I don’t have a lot of free time, so if I’m getting one or two dinners a week out, I try to choose carefully. And I want the same for others – when they come here, I don’t want to make them sad, because there’s nothing worse when you go out when you have to pay for a bad meal.

We’re doing some tests now for our spring menu. We’re working with asparagus, fava beans, those kinds of products. We’ve got a lot of exciting projects this year. We’ll have some guest chefs coming in, I’ll be doing some guest chef appearances outside, lots of new stuff. I’m probably going to do a bit more travel to get more ideas as well.