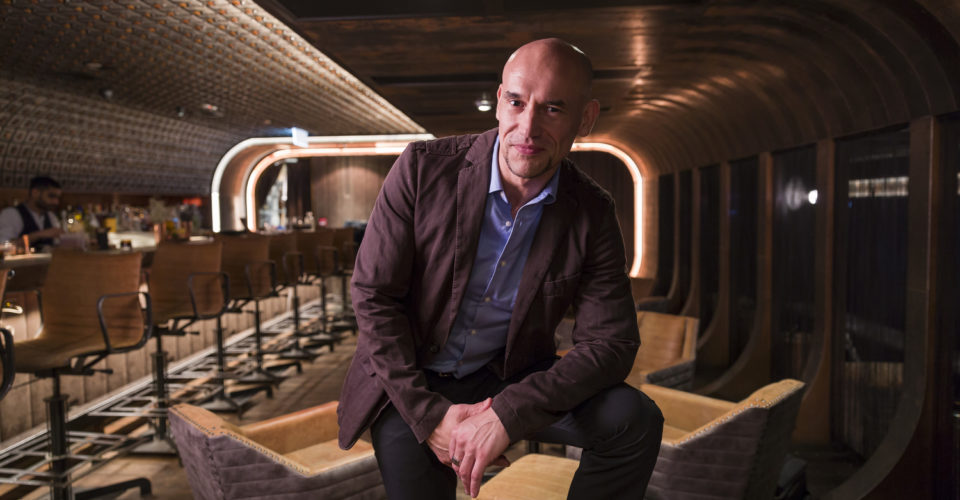 If you’ve spent any time drinking in Hong Kong’s watering holes, you’ve probably heard the name Joseph Boroski. The American “mixologist” has overseen intriguing cocktail menus at countless bars around the world, but in Hong Kong, he’s best known for collaborating with Australian designer Ashley Sutton on creative bar concepts like Ophelia and Iron Fairies; as well as his namesake bar, J.Boroski, which specializes in a create-your-own cocktail concierge service. We popped into J.Boroski when Joseph was in town recently to talk drinks, bars, travel and everything in between.

What drew you to to the industry?

I landed a job selling wines and spirits at the age of 17. It was all of the interesting people in the industry that pulled me in further—and to eventually bartend.

How did you get your start in the industry?

Selling wines and spirits naturally led me to make some good connections with venue owners, one of whom decided to give me a chance as a barback despite my – then – entire lack of experience in bars and restaurants. I worked hard and eventually was given the chance to mix some basic drinks on my own.

You spent your early career years in New York. Why was this, and how did this help you develop as a “mixsultant?”

New York is an absolutely incredible city and I was very fortunate to have truly learned and honed my craft there. I am originally from a rural area a bit more than an hour’s drive outside the city. With stars in my eyes, I moved to Manhattan many years ago and spent a long while modeling and acting while working nights as a bartender.

As I perfected my secondary job, I entirely fell deeper in love with mixing drinks and the hospitality life. Eventually, I ditched pursuing stardom and the day jobs, immersing myself in perfecting my skills, knowledge, and proficiency as a bartender. My first cocktail recipes and bar menus were in New York City and once I started to make menus outside the city and internationally, I coined the term Mixsultant with the intention of describing my growing role as a bartender/consultant.

You’ve helped develop cocktail bars and events in over 30 countries. How has this influenced the way you create a cocktail or bar menu?

Traveling the world and creating cocktails in many different settings has developed my understanding of regional variations in ingredients, cultural drinking and eating practices, and a wide variety of taste preferences.

More recently, you’ve spent a lot of time working on projects in Bangkok and Hong Kong. Why have these cities in particularly captured your attention?

Most of my recent projects have been in New York, Los Angeles, Vietnam, China, and various beach-side destinations in Thailand. J.Boroski is located in Bangkok and Hong Kong. My original J.Boroski in Bangkok sprouted from my bartender school that I opened there due to a growing need and continuous lack of quality bartenders at the time (which is more magnified today and extends also to many other locations). Hong Kong has always been a city with an enticing nightlife and my premium custom-made cocktail concept was something I was confident would fit the city perfectly.

Is there a particular experience that stands out as a watershed moment in your career?

I’ve been incredibly fortunate to have many. Getting the opportunity to make cocktails alongside the food of so many great chefs; being asked to travel the world to create cocktails for incredibly interesting individuals; building a consulting business, hospitality school, and venue concepts from scratch; and being frequently recognized and appreciated for my hard work and contribution to the industry have all been memorable moments and experiences I am thoroughly grateful for.

What do you think makes a great cocktail?

A memorable cocktail is a combination of many factors and minute details that come together in the right way to result in an experience that stands out. I spend many hours explaining these specifics to my students so a brief explanation certainly wouldn’t do justice.

What are you favorite spirits and ingredients to work with?

I really love exploring bold, distinctive, and original flavors, aromas, and sensations in my work.

In 2012, you opened your BAR: School to train the next generation of bartenders. Why? Was this important for you to do?

As mentioned above, the school was created to fill a need for well-trained and talented bartenders. I had been training bartenders for many years and the school was a great place to do more of this.

Oh I have lots of stuff in the works. More venues, a podcast, a book, and maybe a cocktail amusement park (I’m joking about that last one. But on second thought…).