Dishin’ the Dirt: The Bombay East Indian Girl on Career Swerves into the Kitchen 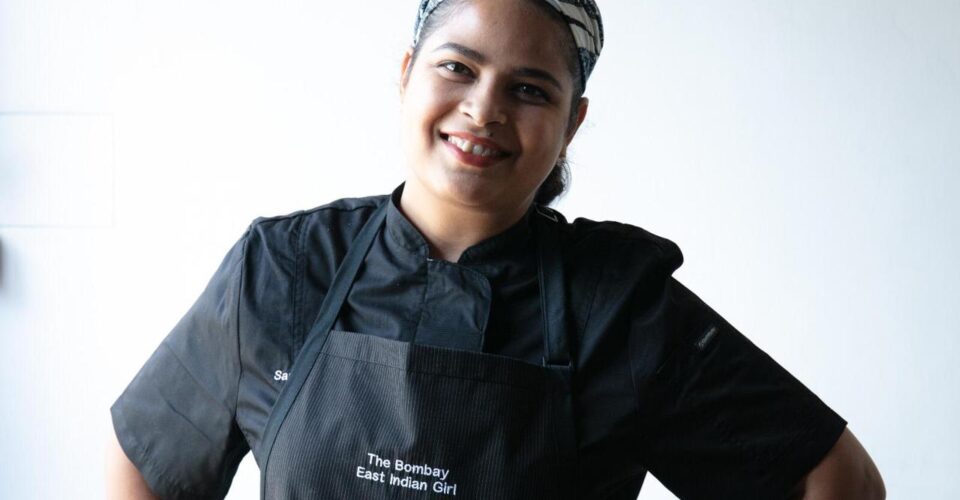 Samaira Rubina C Kavatkar only recently made her first professional foray into the kitchen. Under the moniker “The Bombay East Indian Girl,” she hosted a wildly successful four-night pop-up at Test Kitchen (tickets sold out in hours!). But Samaira’s (Rubina’s) journey wasn’t exactly conventional.

Born and raised in Mumbai, India, she’s from a family of East Indians. This name doesn’t refer to geography, but rather to a small cultural subset of Mumbaikars. East Indians are an ethno-religious Indian Roman Catholic community that were converted by Portuguese missionaries in the 15th and 16th century; when the city of Bombay was handed over to the British East Indian Company in 1661 and migrants from other parts of Indian began arriving in the city, the community began to refer to themselves as East Indians to differentiate themselves. East Indians have a language, culture, and culinary style all their own that combines Portuguese, Indian, Maharashtrian, and Roman-Catholic traditions.

Although her passion for cooking came naturally and started as a child, Samaira (Rubina) spent most of her life working in the corporate sector. Recently though, the timing was right to take the plunge into fulfilling her culinary ambitions and the result was the Test Kitchen pop-up. We spoke to Samaira (Rubina) about her culinary influences, why she decided to start cooking professionally now, and what she hopes to do in the future.

[Editor’s Note: Samaira (Rubina) had several pop-ups scheduled in July and August, but these have been postponed until the new government restrictions have been lifted.]

My mom’s a fabulous cook. She’s the Julia Child of my life. At home, food is a celebration and every day is a feast. I have memories of watching my mom, aunts, and grandmother cooking; my mom even ran a small canteen for a while years ago and my paternal aunts were also in the catering business, so food is in my blood.

Growing up, I was obsessed with cookbooks and writing recipes (I still am!). I had a habit of carrying these colorful, pocket-sized diaries, and when I would go to the market with my mom or to restaurants with my family, I would secretly write about the food I tasted or ingredients I saw. At restaurants, I would try to make my way into the kitchen (I would pretend to go to the bathroom and conveniently get “lost”) and would ask the chefs a lot of questions or just sneak in to watch them cook.

Little did I know that I would eventually marry [a chef] – but then again, it’s no surprise that my husband is also a chef and works at a three Michelin starred restaurant in Hong Kong! We were childhood friends and grew up in the same area of Mumbai, but we’ve been working overseas and traveling for the last 14 years.

Have you done any professional chef training?

No. It came naturally – I just watched and learned. I’d secretly always wanted to go to culinary school, not to make it my profession but just to learn more about food. But, I never told my parents – there were five kids in the family and I didn’t want to burden them with additional costs. So, I made TV chefs my teachers. I was glued to cooking shows and recipe books while other children my age watched cartoons!

What do you think makes a good dish?

What influences your cooking style?

I was raised in an Indo-Portuguese family with a Catholic father and Hindu mother, so my cooking style reflects the rich complexities of the flavors that are intrinsic to these food cultures. We’ve had a lot of “love marriages” in the family, so I’ve also been exposed to a lot of diverse food cultures. This, along with my travels and working abroad, has all contributed to my knowledge of food, flavors, and different cuisines and in some way have an influence on how I cook.
As a chef, I look up to my husband. I haven’t seen anyone as crazy and passionate like him! He’s got serious military discipline in the kitchen and I learn a lot every day just by watching or listening to him. I also have a lot of respect for chef Vineet Bhatia. I hope I can do justice to Indian food the way he does.

Your culinary approach is different from what most people consider Indian food to be – what do you hope people learn from your style of cooking?

India has a rich culinary heritage which has evolved over the years. Sadly, people across the globe have had their experience of Indian food limited to cheap curry houses that churn out butter chicken and chicken tikka. There’s nothing wrong with that – most people love butter chicken – but we’re so much more than this.

Our traditional food habits across India are based on a holistic approach to nutrition. We’re blessed with great farm produce and spices which most people around the world don’t get to experience. With my cooking, I hope to change how Indian food is perceived. I’m really just bringing food from my home to people’s plates – these are things that I eat everyday. I want everyone to enjoy that. 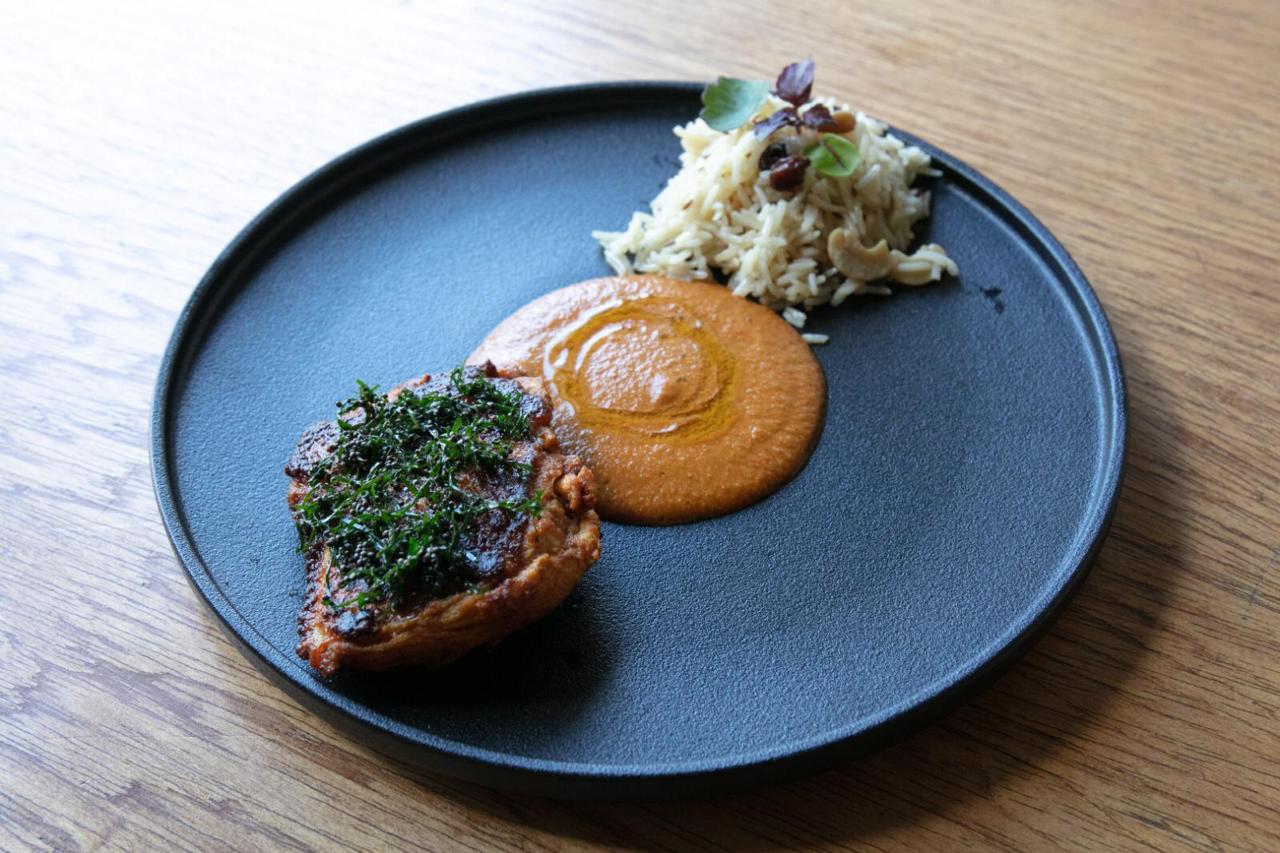 The Test Kitchen pop-up was your first time cooking professionally. Were there any particular challenges you faced or things you didn’t expect? How did you deal with this?

Thankfully, everything went smoothly. I had a great support team, and plenty of lessons and tips from my chef husband. The only real challenge I had was sourcing products during the lockdown. It took me almost two and a half months. Luckily, my organizers respected my vision and were gracious enough to wait until I had everything I needed for the pop-up.

What made you decide to move into professional cooking at this point in time?

Cooking has always been a passion of mine. I’ve wanted to work with food since I was a little girl. My husband and best friends have been pushing me to follow my passion for cooking for a while now, but I wanted a good platform where people understood the type of cuisine I wanted to showcase. I’d been working as a paralegal until April this year; then I lost my job because of the pandemic. So, the timing was perfect to pursue this and everything happened so quickly over the last few months.

How did your Test Kitchen pop-up come about?

I met Vincent Mui from Test Kitchen and Ada Leung from Hong Kong Wine Friends through a common chef friend earlier this year. I was sharing my ideas with them and invited them to my home to try some of my dishes. They were blown over after tasting a few of my East Indian dishes. And as I mentioned before, the timing was just right, so we decided to pursue the idea of doing the pop-up at Test Kitchen.
In all, it took three months for everything to come together, from creating the menu to sourcing the products and doing tastings to get the right wine pairings. I wanted to make sure we did this the right way. There was a lot of creativity and hard work there.

What are your plans for the future?

I haven’t planned anything just yet. Right now, I’m just enjoying all the lovely comments and feedback coming my way – I’ve been overwhelmed by the positive response. I’m so thankful to all the patrons who came to eat at my first pop-up and loved it – I felt like a star!
I do have a few more pop-ups coming, and even more still under discussion. Because of the pandemic, I’m taking things one day at a time right now, just trying to keep safe and follow the government regulations. Food is the one thing that brings all of us together, and I really just want to cook and make people happy. I do hope someday to write my own cookbook. I also want to open a small restaurant, that will also have a community kitchen to serve those in need.
A Dishin’ the Dirt profile.