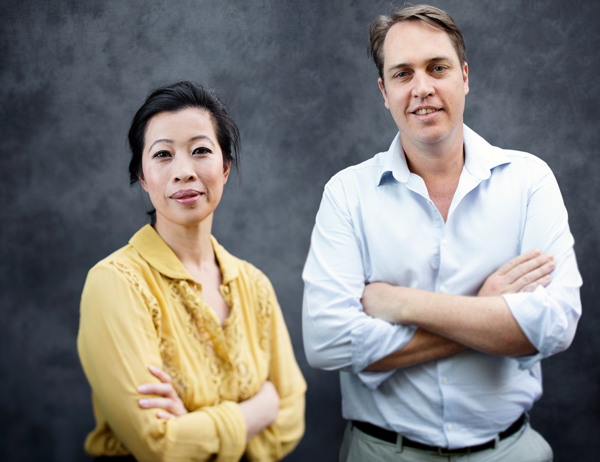 Founded in 2010 by husband-and-wife duo Chris Woodyard and Bronwyn Cheung, restaurant group Woolly Pig Hong Kong is behind establishments such as Big Sur, Bathers and Madame S’Ate, originally gaining notoriety for Madame Sixty Ate and 12,000 Francs. Tapped to do the dining options for the newly reopened Hong Kong Museum of Art — modern Australian restaurant Hue and casual pub Ink — the two reveal their thoughts about Hue and how Woolly Pig Hong Kong came to be what it is today.

Chris: Lived on a dairy farm and hated milking cows, mum told me if I did not want to milk the cows I better learn to cook dinner.

What made you decide to become restaurateurs?

Bronwyn: I’m not sure you actually ever decide to become a restaurateur. Creating and building a restaurant tends to happen because of an idea that keeps coming back.

How did you meet and decide to open a business together?

Chris: I went for a job interview where Bronwyn was a part-time waitress, got the job, saw Bronwyn there, and tried to ask her out. It took me three months to get our first date. A couple of years later, I opened a small restaurant in a Sydney suburb. Bronwyn ended up spending as much time working there as she did for her day job in publishing, and it just grew organically after that.

What’s your background? What training did you do?

Chris: I started cooking at 12 years old and working in professional kitchens at 14. It was what I always wanted to do. I did a lot of training as a chef across the globe, but once you open your own restaurant the growth within yourself is the key. There is no other department to pass the problem to, so you better work it out yourself.

What are the top qualities for a restaurateur, in your opinion?

Chris: Understanding people is key. You need to look at all situations not only through your own eyes but considering how others would see it. This is even more true in Hong Kong where we have such a melting pot of cultures. I also think it is also important to be clear on what you are trying to achieve and not be overly reactionary to the opinions around you. It is important not only to listen, but to choose which you react to.

Bronwyn: Being flexible, listening, and knowing when you need help. Problem-solving is huge, and also being brave and having a go at stuff we don’t understand or haven’t tried before. Tenacity and perseverance are essential. Not taking everything to heart is also key — being able to wake up the next day and do it all over again given the ups and downs of the day before. Google is also helpful for all those things I don’t know how to do!

Chris: Woolly Pig restaurants are not unified — to create different experiences in each venue is key for our own satisfaction.

Where do you get your inspirations from?

Bronwyn: From the community in the area. We do try and create things that work for the community rather than bringing a concept to life for the sake of the concept.

How did you conceptualize Hue?

Chris: This was about coming back to our roots. We dearly wanted another flagship where we could express Woolly Pig on a higher level. Our first restaurant in Hong Kong was Madam Sixty Ate in 2001 — a modern Australian restaurant with a casual vibe but top-notch food. That is exactly what we went for with Hue.

How did you take its location at the Hong Kong Museum of Art into consideration?

Chris: I think the main reason we were chosen for the venue was that we looked at the museum and considered what style of restaurant such a venue deserved. We looked at other museum restaurants around the world and at the connection between the restaurant and the museum.

As time moves on, we would like to see Hue become more integrated with the museum, with menus focused on the exhibitions and artists. We have already put aside some wall space in the dining room to hang the artists’ work.

Is there a project you’d really like to do if given the chance?

Bronwyn: Probably a chance to do something elsewhere. We have now been in Hong Kong for over 10 years and don’t often leave. We turned down an opportunity with Mexico City W Hotel 10 years ago and I’m not sure that we ever knew if it was the right thing to do. It was a sliding doors moment so it would be nice to have another one of those again.

Chris: I would like to say “sleep”, but a new restaurant like Hue is like a new-born baby and we have just taken our first step. There will be a lot more going on.

Bronwyn: We have one more new project in the pipeline for March 2020 so it should be an interesting year ahead of us!