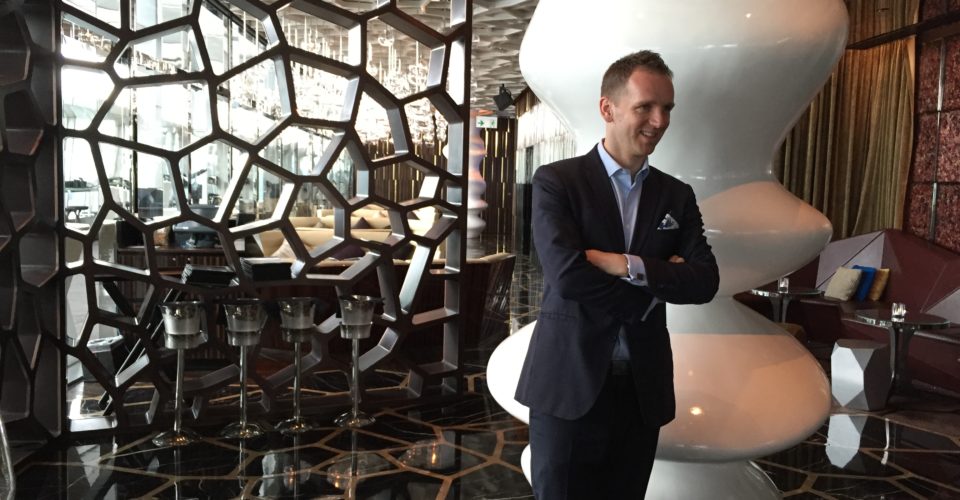 Ozone’s restaurant and bar manager Fiachra Martin might be new to Hong Kong, but he’s already setting himself up to be the city’s de facto Irish ambassador. He tells The Loop about the differences between a whisky and a whiskey.

Irishman Fiachra Martin grew up in Blanchardtown, Ireland and got his first serious F&B gig at a Pizza Hut in Dublin, where he learned, among other important things, that white wines need to be served cold. From there, he steadily climbed the hospitality ladder, landing a job at the Mandarin Oriental in London, then Paris, eventually making his way to the Hong Kong Ritz-Carlton as Ozone’s restaurant and bar manager.

London would definitely be charismatic: London is a vibrant place. Irish hospitality is very natural, and not forced. For Paris, it’s all about quality. There’s a chip in your cup here, you’re going to hear about it. They don’t mind paying 25 euros for a cup of coffee, but it better be a good coffee, you know? Some people call it French arrogance but they have a real respect for their products.

In Hong Kong, it really is down to business. I’d say Hong Kong is innovative. Everybody is innovative. If a five-star hotel bar is doing something, I’m going to know about it 10 seconds later. And then you see something totally different in a bar like Quinary, like sending cocktails out in bathtubs.

What’s the hardest part about managing a bar?

The hardest part without a doubt is consistency. We can all have excellent feedback and five star reviews, and get a Michelin star, and have happy customers when things are going well — all that is easy. But when things are not going well, when there’s a little problem back of house, when the staff’s sick or when you’ve got something on your mind, you still have to be prepared. The rain is coming, there’s a thunderstorm… you have to be ready for anything.

Give us an on-the-job humblebrag.

Mr. P is a former client of mine, and one night he was dining at a hotel where I was working. He was coming out of an outlet that I wasn’t managing, and I asked him, “How was your dinner?”

He said, “Well, I’ll tell you ‘cause you asked. Chicken was cold, bread was hard, not fresh. I spent about 3,000 euros here in the last month, and the people didn’t recognize me. I had to wait for the bill, had to get up off my seat. Not what I as expecting.” Then he walked out.

I ran after him and said, “You know what, I’d love to bring you in for a digestif on the house. Come in to the bar.” He said, “No I’m working tomorrow.” And I remembered that he drank Manhattans, so I said, “If you change your mind, I’ll make you a nice Manhattan.” And he turned around and changed his mind. The next day he came back. He went back to the restaurant, and became one of our best clients. We even named a cocktail after him. We’re still in touch.

You have been promoting more Irish whiskeys in your role at Ozone. Is Irish whiskey really different from Scotch?

Haha. But what really is the difference?

The short answer is, Irish whiskey is triple-distilled 99 percent of the time, compared to the Scottish way, where it’s 98 percent double-distilled. The Scotch whiskies that are triple-distilled are very influenced by the Irish. Triple-distilling makes the drink clearer, smoother, more approachable. It’s not limiting the whiskies to 50-year old men.

We also use malted and unmalted barley. And that goes back to the malt tax [in the 1700s]. The government wanted tax on our whiskey production, and you could reasonably assume that they were having trouble finding out how much whiskey we were producing. Four barrels would go out the door, two would go out the back.

So the government started taxing malted barley, which is used to make whiskey. And then the Irish started using unmalted barley so that they would pay less tax. That was a little bit sneaky, but then they discovered this produced a nice, creamy smooth whiskey. It wasn’t as efficient to get the sugar out from the yeast, but it worked all the same. That’s the reason we started using unmalted barley. It’s a lot smoother, very rarely peated or smoky.

Randomly: what are your thoughts on Brexit?

We [Ireland] are not linked to Britain in any way. The only connection is probably our proximity. We’re probably closer to the French than we are to the Brits. But we entered the EU at the same time, same year.

Brexit’s funny. It was really shocking for me as an Irishman. I lived for four years in London and it was a very exciting time for the industry. But if you walk into any place in London, there is very little chance that the person behind the bar, in the cafe or sitting beside you is from London. Chances are they are not from London — they’re from Ireland, they’re from Romania, they’re from America.