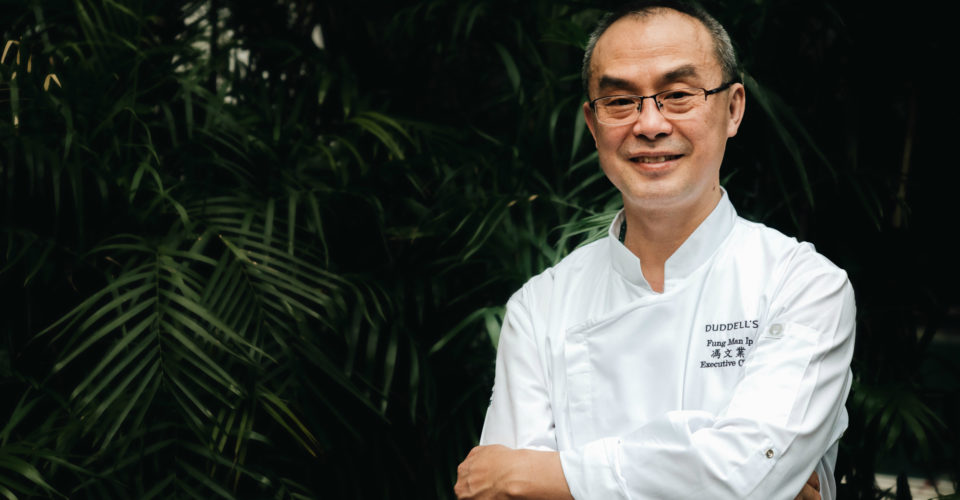 Executive chef at well-known Cantonese fine dine Duddell’s, Fung Man Ip has honed his skills for over 35 years, whipping up dishes in the kitchens of Michelin-starred Dynasty Restaurant at Renaissance Hotel and Mott 32, as well as in restaurants throughout China. He speaks to The Loop HK about the nuances of Cantonese cooking and his favorite foods.

My interest developed from the fact that I have always enjoyed eating, but I didn’t always intend to be a chef. In fact, I thought I wanted to be in the Hong Kong Disciplined Services. I joined the force in my early 20s, but it turned out that being in the force wasn’t as exciting as I thought it would be. An opportunity to work in the kitchen came along, so I decided to try it out. It was very tough work in the beginning, but I never thought about leaving the industry.

How do you create innovative dishes while still preserving the traditional aspects of Cantonese cooking?

Innovation is difficult to define and represent, especially with Chinese cooking. For me, the fundamentals of Cantonese cooking always focus on ingredients and preparation; using only the freshest ingredients possible and preparing the dish with integrity. I try not to get too creative with traditional dishes in terms of replacing specific ingredients or flavors with others. Instead, I consider changing the way the dish is presented so that it can be enjoyed in a different way, while still reflecting the original intention. This is particularly challenging as Chinese food is usually prepared for sharing. I’ve had to develop recipes or change preparation methods adapted to individual plating so that diners are encouraged to try a bit of everything.

An example at Duddell’s is the sweet and sour pork prepared with Italian balsamic vinegar instead of traditional Chinese vinegar. I found that balsamic vinegar is a bit milder and less sharp, but acidic. It balances well with the fresh pineapples and the richness of the fatty pork. In a way, it’s not about changing the dish, but seeing how dishes can be improved with the influence of other techniques or cuisines.

What kind of food did you eat growing up?

I came from a working class family and we ate very simply — steamed fish, stir fried vegetables and casseroles.

What is the Cantonese dish that’s most special to you?

It would have to be claypot dishes, in particular chicken claypot rice. It’s a dish I grew up eating and that I will never get tired of. Back then, claypot rice was considered a working class dish. You used whatever ingredients you had and combined them all in a pot with white rice. It’s such an easy dish to prepare; anybody is able to make this dish at home. At its simplest, it’s only three ingredients: chicken, garlic and shallots.

What makes claypot dishes so good is how the ingredients are caramelized during the cooking process. All the flavors and aroma come together, creating a very enticing dish. This aspect is highly regarded now, even in high-end cooking. It shows that simplicity is still appreciated in the kitchen and by diners.

What are some of the biggest misconceptions about Cantonese cuisine that you’ve encountered?

Cantonese food is identified with other regional Chinese cuisines, so a lot of people think Cantonese food is greasy and involves a lot of frying and oil. In fact, Cantonese cuisine is known for refinement and subtlety, especially when prepared properly. Steamed dishes are one example. From dim sum to seafood, they require skill and knowledge to prevent overcooking.