Gweilo Beer: The power of craft beer to bring people together 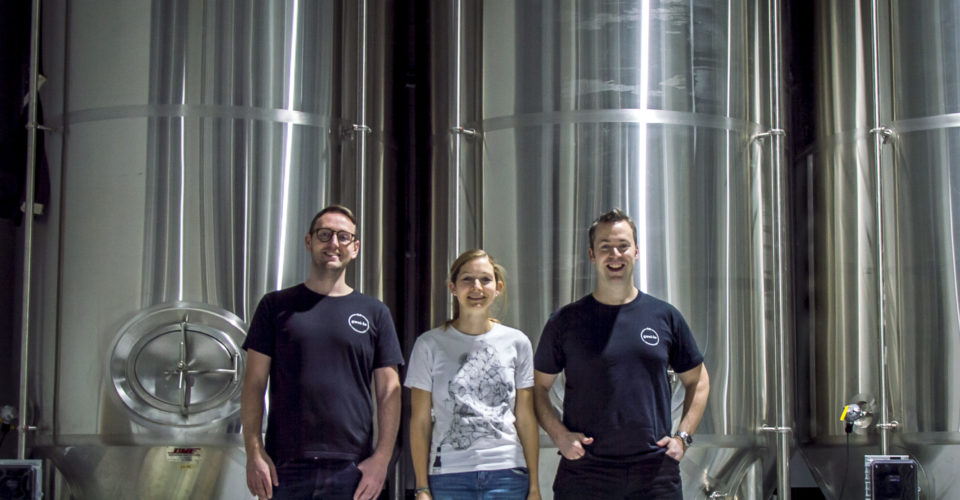 When Gweilo Beer was first established in 2014, founders Ian and Emily Jebbitt and Joe Gould created the label’s first beer in a spare bedroom. Now, they’ve opened the biggest craft brewery in Hong Kong, in Fo Tan, to keep up with demand for their bottles – mostly 4 to 6% session style ales. We spoke to Gweilo Beer about their journey so far, and about how the Hong Kong craft beer scene has made leaps and bounds over the last few years.

Ian first began home brewing with his dad at the age of seven and introduced Emily to his hobby when they got married, turning their garden shed into a microbrewery. Joe arrived in Hong Kong having experienced the scene taking off in London.

How did you come to work together?

Our journey started as three friends working on a side project that we were very passionate about. The three of us met drinking craft beer and voicing shared frustrations with what was on offer when we arrived in Hong Kong. We realized that we all enjoy making and tasting different beers and exploring how many different varieties of beer can be made using four simple ingredients.

How did Gweilo Beer start out?

We all had full-time jobs and very little in the way of funds. The only real option for us was to contract brew our beers. At the time we were lucky to find a supplier who believed in our concept. Looking back, it’s funny to remember how anxious we were placing the order for our first brew, having paid for it with our savings. We had to order 300,000 bottle caps and joked about what we’d do with them if the launch fell flat. We all believed strongly in the recipes and the brand, but you never quite know how a new idea will be received.

Fortunately, we launched and the response was beyond our expectations. Within a few months it became clear people really liked what we were doing.

What are the top three things you love most about craft beer?

1. The variety and experimentation across the huge range of styles and ingredients.
2. The versatility of craft beer when it comes to food pairing.
3. Ultimately, the most important thing for us is the power of craft beer to bring people together—socialising, learning and collectively enjoying something they love.

Will you be introducing new beers now that you have the brewery? Can you tell us a bit about them?

Now that we have our new brewery and new head brewer, Matt Walsh, we will be expanding our core range of beers from three to six. The Gweilo core range will stay true to the format we’re known for: well executed, accessible, go-to craft beers. In addition to our core range, we are introducing seasonal and 1,000L ranges.

Our seasonal range will showcase styles and ingredients tailored to the time of year. The 1,000L range is our platform for experimenting with different flavors and different styles of beer on a smaller scale. This format and smaller volume is perfect for testing new ingredients and recipes. It’s also an opportunity for us to help educate people on the variety of styles that exist. We want to push the boundaries and test people’s perception of what craft beer is. Matt’s brief for this range of beers was simple: there is no brief. We have encouraged him to draw on his 20-plus years’ experience at the top of the US craft beer industry and to be as crazy as he wants to be.

What are your favorite craft beers, whether from Hong Kong or elsewhere?

Apart from the obvious (Gweilo Beer!), our favorites are Mosaic IPA by Karl Strauss, Tremendous Ideas IIPA, a collaboration between Cloudwater Brew Co and Other Half Brewing Company, and Heart & Soul by Vocation.

How do you think the craft beer scene has changed in Hong Kong over the last few years?

When we first arrived in Hong Kong five years ago, there was very little craft beer available. Although we are still years behind countries like the US and UK, the interest in craft beer here has grown rapidly since then. It’s an exciting time to be involved in the industry. New breweries, tap rooms and beer festivals are popping up all over the city, helping to educate people on the benefits craft beer offers and the value of drinking fresh beer brewed by local breweries.

Where do you see Gweilo Beer in the future?

We’re really excited about all the new beers we have planned for this year, especially the 1,000L batches. We’re looking forward to helping the growth of the craft beer scene in Hong Kong and also have plans to export our beers to other Asia-Pacific countries in the near future. As was our mission when we first started Gweilo Beer, we want to continue making fun, fresh, unique beers for everyone to enjoy!