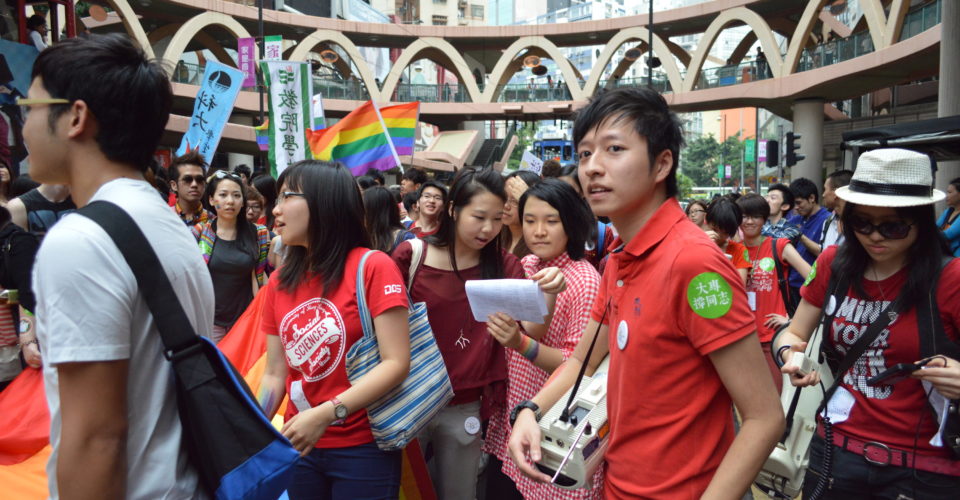 When he was younger, Geoffrey Yeung wanted to work as a banker or consultant for international companies. As he grew older, he had a change of heart.

“Around 2012, I came out as gay after a long period of personal struggle,” Yeung says. “It was then that I realized that there was indeed a community that I really wanted to do something for.”

Having had experience working as an intern at the UN and at NGOs overseas, he got involved with major players in the LGBTQ movement in Hong Kong, like Pink Alliance. He also helped to establish Action Q, a cross-campus group that mobilizes youth support for LGBTQ rights, social justice, and democracy.

“Working behind the scenes is as important as being on the stage. It is much more empowering and effective to give the marginalized a stage to speak about their own life experiences than to gain a voice for a privileged student like myself.”

Yeung also works with the organizations to speak at forums and seminars on the need to introduce anti-discrimination laws to protect LGBTQ individuals. He has met government officials and Legco members to advocate for gender recognition laws for transgender people, drafted shadow reports for UN human rights bodies on sexual and gender minorities in Hong Kong, and travelled to the UN office in Geneva to attend hearing sessions.

As a result of their efforts, Yeung says the UN Committee Against Torture last year called on the Hong Kong government to reform its abusive practices on legal gender recognition for transgender people and surgeries performed on intersex children.

In 2015, Yeung was awarded the Rhodes Scholarship for postgraduate studies in law at the University of Oxford. In between his law studies, Yeung conducts research on transgender rights and legal gender recognition, as well as writing policy briefs on same-sex couples’ rights.