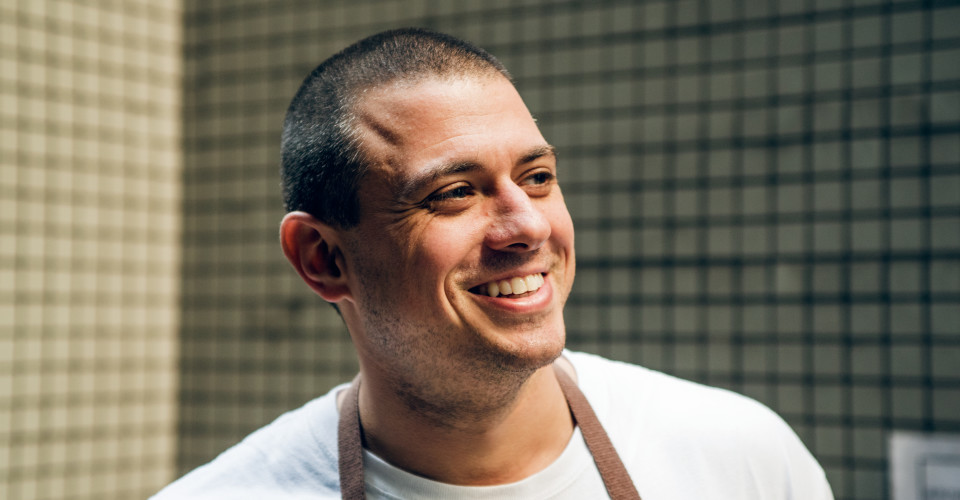 Matt Abergel of Yardbird and Ronin.

Chef Matt Abergel is the co-owner of Yardbird, Ronin and Sunday’s Grocery. He tells Adele Wong about frozen Brazilian chicken skewers and the spring onion test for aspiring chefs.

Matt Abergel was born and raised in Calgary, and started working in the restaurant industry when he was 15. Abergel met his partner Lindsay Jang (the two are separated but remain business partners) while still in Canada, and he eventually moved to join Jang in New York, where he worked at prestigious Japanese restaurant Masa. Then it was onto Zuma in London, before he was offered the executive chef role at Zuma Hong Kong. After two years, Abergel decided to branch out on his own and opened the wildly successful Yardbird yakitori restaurant on Bridges Street. Today, he and Jang also run seafood-centric Ronin and retail-slash-sandwich shop Sunday’s Grocery.

You started working in F&B really young. What were some of the less glamorous jobs you had before Masa and Zuma?

My first cooking job was when I was 15 — it was an Indian restaurant that I liked eating at. I did that for not very long, it was a pretty terrible job actually. It was just a really poorly run restaurant, dirty, with a lot of illegal things happening there that normally wouldn’t be okay.

When I moved to Vancouver I started working at a place called Go Fish on Granville Island. It was literally a shack. We bought fish directly from the fishermen and it gave me a lot of practice butchering fish.

Then I started working at a restaurant called Shiru-Bay Chopstick Cafe. After that, I had some regular customers ask me to be the chef at their restaurant, which was more or less just a money-laundering operation for Vietnamese drug dealers. But it was fun.

That’s when Lindsay [Jang] came for the summer. She was living in New York and she came to visit. She worked at the restaurant for the summer and we fell in love. The story takes a sharp turn for the worse. Haha. [Editor’s note: Lindsay Jang is present at this point in the interview, and she is also laughing.]

When you applied to Masa, you arrived prepared with your own set of knives. What did they make you chop?

We had to cut vegetables actually, a spring onion. It’s one of those things, a lot of people think it’s just a spring onion, so you don’t have to pay attention, you know. And you can also see if your knife is sharp. So that is one of the tests. You have to cut it very thin, your knife has to be very sharp so you don’t crush the actual thing.

Is a Japanese kitchen different from a western kitchen?

Oh yeah, very, very different. It’s a different hierarchical system. French restaurants, for instance, are run by [many] positions, and Japanese restaurants are run by one position. There’s the boss, the Taisho, which means ‘general’ in Japanese. And then there’s basically everybody else who works together.

What happens a lot in western kitchens is, people are kinda cut-throat because they are trying to jostle for position. They want to be a sous-chef, a chef-de-cuisine, they wanna do this, do that. A Japanese kitchen isn’t really like that: it’s well-rounded and responsibilities are passed down rather than taken by one person. They’re more spread out for all kinds of reasons.

Japanese people are more self-motivated and self-policing. In a western kitchen, it’s a very untrusting situation, where everyone is checking on what everyone else is doing. A Japanese kitchen is more about doing it together and still getting screamed at, but not in the same way.

What was it like working at Zuma in Hong Kong, before you did your own thing?

When I worked at Zuma they were importing everything purely for the sake of importing it. Not that it was better quality, ‘cause oftentimes it was way worse. Oftentimes they were buying frozen Brazilian chicken legs and using it for yakitori. And these baby French leeks, a premium box of 10 pieces for $110 — they were putting that in between yakitori made of frozen Brazilian chicken. Their priorities were really not in the right place. I came in and changed a lot of the things and tried to make a difference. You learn a lot through them.

Do you have any advice for chefs who want to strike out on their own?

You just have to have a solid concept and an undying willingness to work your ass off and be dedicated to it, and treat people right. There’s no secret, nothing I can tell you that will change your life. Just being good to people, trying to work hard and do your best. Provide an environment that is solid.