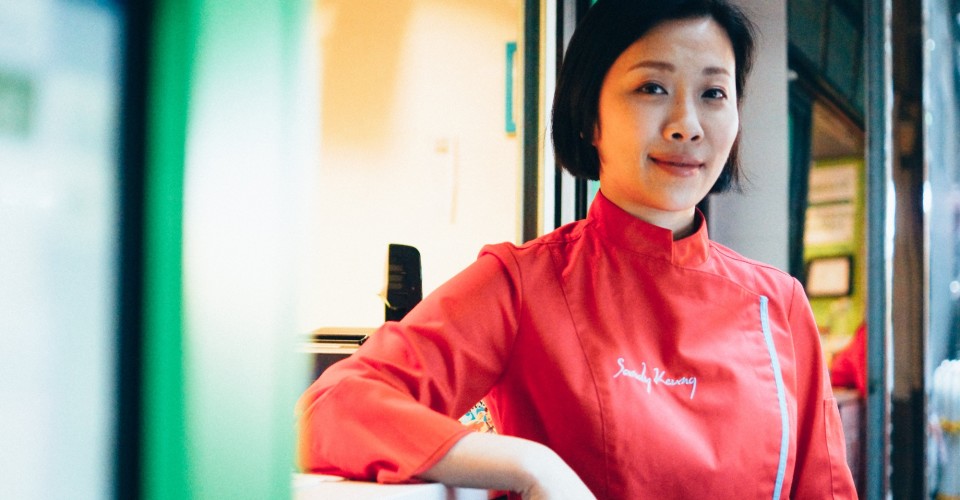 Sandy Keung is the chef-owner of Good BBQ Takeaway, a trendy siu mei (roast meat) takeout in a Central alleyway, as well as fine-dining restaurant TABLE in Sheung Wan. She tells Adele Wong about being a woman in a male-dominated industry, dealing with angry sous-chefs, and why her mom endearingly calls her a ngau (cow).

Sandy Keung moved from Hong Kong to New York City to attend high school and university, and started her career as a certified accountant at Deloitte before repatriating to Hong Kong to be closer to her aging parents. Back in the SAR, she continued working her way up the corporate ladder, taking on CFO and other leadership roles at hedge funds and publicly traded companies.

Eventually, Keung began helping out the family property development business and moved to Ho Chi Minh City to manage the company’s overseas assets. She started hosting dinner parties to expand her social network and before she knew it, Keung was invited to be a guest chef at Ho Chi Minh City’s fine-dining French restaurant, Cepage (now closed).

Keung returned to Hong Kong and partnered with different F&B ventures until she opened her own restaurant, TABLE, two years ago, focusing on ingredients-based — as opposed to technique-based — cooking. She took over a 30-year-old siu mei operation in Central last year and has since rebranded it to a contemporary char siu takeout joint eschewing styrofoam boxes for cutesy paper packaging.

How did you like the Chinese food in New York?

I was going to Chinatown all the time to get takeout. I couldn’t understand what moogoogaipan was, I had no idea what moo shu pork was — they were all these New York Chinatown inventions. Egg rolls were a completely American invention, and duck sauce. But as I lived in New York longer, the food became more like Hong Kong. They had very good dim sum, very good Chinese food as well.

You weren’t trained as a chef — how did you acquire your cooking skills?

A lot of it was from the internet, I was self-taught. Also, when you go out to eat enough, that’s part of your tuition. I had a notebook, I was very meticulous when I cooked. In the book there would be plating pictures, illustrations, and arrows pointing to everything — it was very, very detailed.

What’s the biggest takeaway for you as a restaurateur?

I’ve been doing this for two years and what I realized was: now I’m running an SME. When you’re running an SME, it means you need to do everything and anything. So when the jeh jeh (female floor staff) doesn’t come into work, I have to go in and wash dishes. That’s the description of a boss in a small business: to fill any gap.

There was this one time when a customer, a German tourist, asked me to go into the male toilet of my restaurant [because it was dirty]. He said, “Sandy, I need to go to the bathroom, now I need to hold it in and need to go back to the hotel.” I said, “Don’t hold! One second.” I put on my gloves and wiped down the toilet.

With social media and all that, you’re so terrified. The customer just had a great meal, he told me how much he loved the food, and I didn’t want the toilet to prevent a great review.

Around the world, it’s less common to see females in both corporate leadership positions and restaurant kitchens. Do you have any thoughts on this?

I think what is amazing are the similarities [between the two jobs]. When I first started in accounting may years ago, they used to have surveys and you used to have these special task forces to figure out, why aren’t there more women in the management positions? It was kind of like a man’s world.

In F&B, there are junior kitchen staff, and maybe in western kitchens there are more women chefs, but I think in a Chinese restaurant there are very few. At my restaurants, every time I hire a woman to work [in the hot kitchen], they don’t stay very long — not because they don’t want to stay, but they do get a lot of bias from the male staff. Immediately, there are a lot of physical challenges and limitations. It is very heavy duty work. The buckets and buckets of char siu meat that we have to process are very heavy. The big pigs that we handle, those are like 40kg plus.

There are immediate biases or aversions towards working with females. One night, one of my ex-staff at TABLE was very upset with me about something. He didn’t know how to express it because normally he would just curse it out, but since I was a female boss, he didn’t know how to curse at me. That night, I went home and around 2am in the morning, I woke up and saw my Whatsapp flashing. I got a message from my sous-chef and it was a three-page rant, yelling at me because he couldn’t hold in his anger. I found that quite comical.

How would you describe yourself?

My mom always said I’m an ngau (cow), because anything I chose to do, I had to work very hard at it. As an auditor you were always working nights. I always picked stuff that was sun fu (tough). Maybe that’s my fate.