Hong Kong Homies is a series where we get deep real fast with Hongkongers.

In honor of Chinese New Year we asked five Honkongers across the ages to tell about what the holiday means to them.

I like when the family gathers together for dinner, but it’s not particularly special just because it’s Chinese New Year since my entire family meets up often during important events or festivals, and most of the time, we all manage to make it.

I love the food during Chinese New Year. We eat out on the last day of the year (年三十晚), but we have a nice home-made brunch on the first of the year. It’s a big feast for 20-30 people, so we usually start preparing the night before at 12am.

It would be a lot of dishes in double portions – soup, rice, chicken… My grandma used to cook the meal all by herself, but not anymore in recent years after my grandpa passed away. When I was 8 or 9 years old, I remember happily going to everyone and giving them chocolate, when all of a sudden my pants dropped to the floor. I was so embarrassed and immediately ran off into another room.

There was another time when I was maybe 15 or 16, when I helped my uncle set up a stall at the New Year market. We sold a lot of things, especially food, like sugar-coated haws (冰糖葫蘆) and fish balls. I remember it being really crowded, and we counted down to the new year with other stall owners, because we were all pretty much stuck where we were.

One year, Chinese New Year and Valentine’s day were on the same day, so my uncle’s flowers sold really well. And they were plastic!

Every Chinese New Year, our family goes back to our hometown in Guangdong, where my grandparents live. We stay with our grandparents in the village, where there is much more space to play and their house is big enough to accommodate us all.

We don’t necessarily follow traditions for Chinese New Year but one thing we definitely do every year is chop a chicken (斬雞) for dinner. Very literally, ’cause my grandpa owns a few chickens (and pigs) in the village, which he wakes up very early every morning to feed. The chickens run really fast; I watch him chase the chickens around every year to catch them. 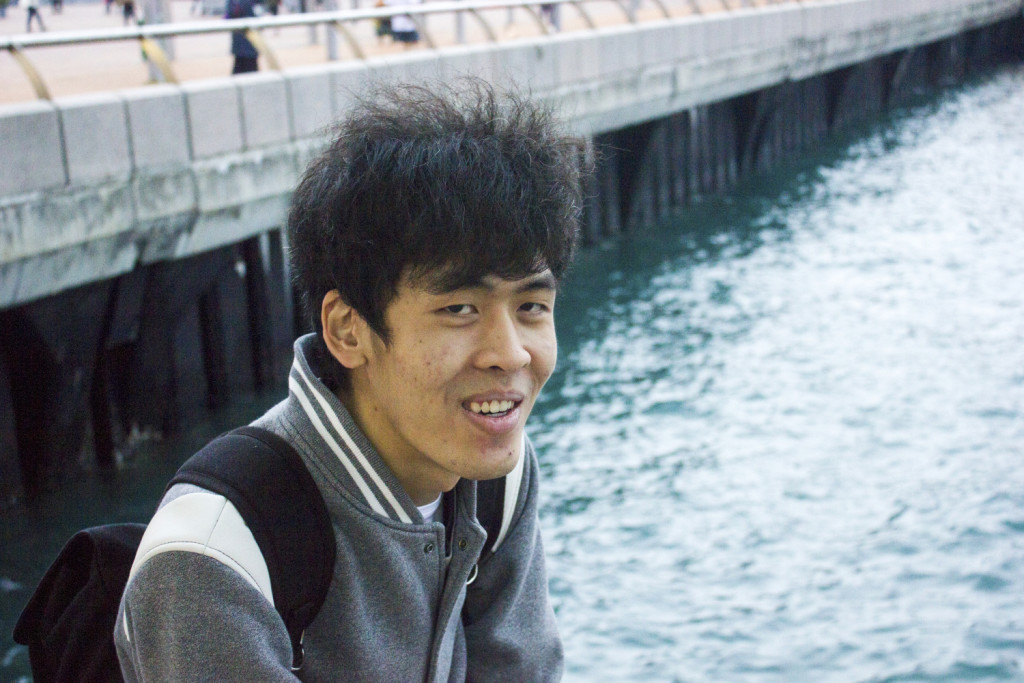 I’d assume that celebrating Chinese New Year in Guangdong is more festive and lively than in Hong Kong because we get to run around with all that space, set off fireworks in front of the house.

My cousins and I spend a lot of time together then – playing with Bang! Snaps (and throwing them at each other’s feet), singing karaoke, and going hunting for street food. The congee there is really good.

Our parents don’t hang out with us. They play mahjong – and mind you, they deal big money. They won’t let me learn or play, but I actually learned it from my friends and play with them sometimes. My parents don’t know about it though.

On the first day of the new year, I sleep in until noon. I’m not sure where my parents go, they probably go off to see their friends and relatives by themselves.

We bai neen (拜年; offer a new year blessing) at night after dinner. Our relative’s houses are only walking distance away. Everything is pretty close in the village. We have a nice time catching up and drinking tea.

This year will be very different because my po po (grandma) passed away just a week ago. We won’t be doing any bai neen this year because we’re sticking with the Chinese traditional funeral, and so we won’t visit any friends or relatives.

We will probably just stay home and walk around a bit. Our agenda for the first day of new year (初一) consisted of going to grandma’s home on my dad’s side of the family (嫲嫲)  for breakfast, then yum cha with uncles and aunts, followed by a visit to great grandma, where we spend our afternoon. Finally, at night, we go back to po po’s home for dinner. Po po’s passing was something that was expected, but it was still very sudden when it happened. We didn’t get the chance to see her before she left. We had actually planned a trip to London during the break, and already got tickets for it.

The funeral will be two days before the new year. The family is in mourning… especially when grandpa starts crying, the rest of us start crying as well.

I was quite close with my grandma. I miss her, especially her smile — she had a really nice smile. Her food too. She cooked all our Chinese New Year meals in the past years. They were all really tasty. We are Chiu Chao, so grandma always made us a lot of Chiu Chao food and snacks.

I loved the Chiu Chao dumpling she would make for us during the new year – 粿 （pronounced gweh). They’re basically a kind of bread made with sugar and egg and they’re sweet and soft and served warm.

My mom will be cooking this year. Her turnip cake is awesome.

Like many others, New Year’s Eve dinner（團年飯) was a huge thing in our family. But ever since all seven of us kids started working, there would rarely be a time during the year when we were all home for dinner, so NYE dinner was something we all looked forward to — it was probably the best meal of the year.

My mother did the New Year’s Eve dinner cooking all by herself. Dad helped sometimes, when he was still with us. It always took them a long time to prepare the meal: they would season the meat and braise the mushroom the night before and, of course, there would definitely have to be chicken in a grand feast like this.

For a family as big as ours, we would have at least three chickens on the table. Back then, mom would buy them fresh from the market, slaughter them, and pluck the feathers all by herself. 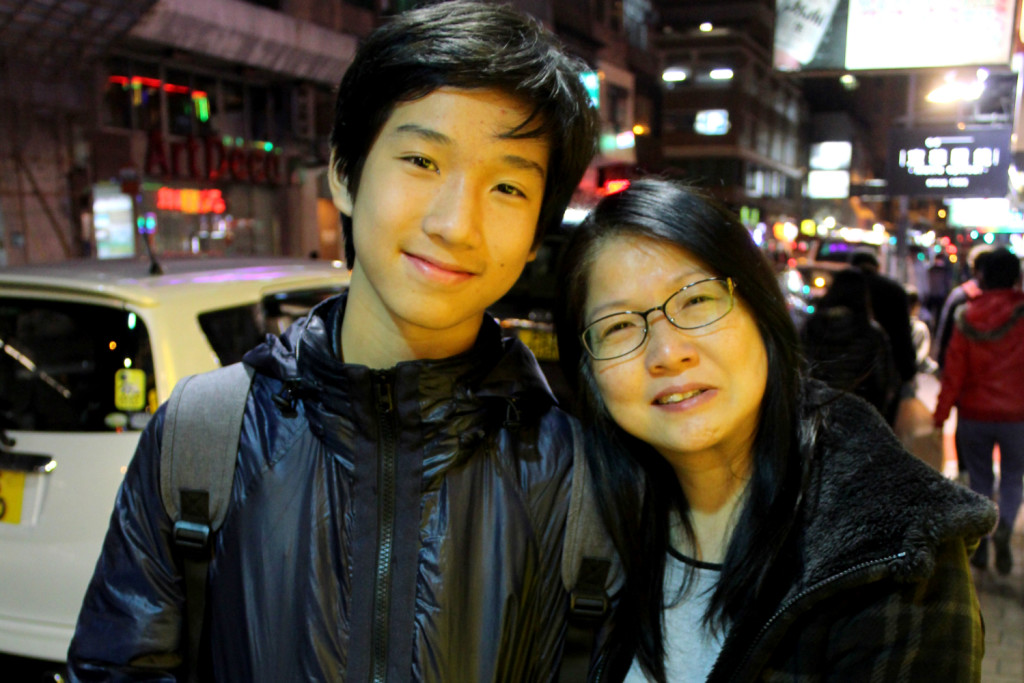 We usually didn’t have Chinese New Year’s Eve dinner ‘til quite late – at least 8 or 9pm – since we all worked in quite scattered locations. We’d be going home to Shatin from work all the way in Causeway Bay, Central, Ho Man Tin, Hung Hom and Kwun Tong, but our parents made sure that dinner didn’t start until we were all home.

After dinner at around 11pm, the family would bai shen (拜神; worship the gods) by burning incense and praying for a blessed and prosperous year ahead.

Nowadays, my mom doesn’t cook our Chinese New Year’s Eve feast anymore because it can be quite an arduous task and she’s too old for that, though she still insists on making us soup every now and then. We mostly have dinner out in Chinese restaurants, like a lot of other families – which is actually quite a change from before, when everyone had their meals at home.

But it’s still a nice occasion that brings the entire family together, with all our spouses and kids, and celebrate the year together. Even though we don’t necessarily follow a lot of Chinese New Year traditions anymore, I hope that this strong family spirit stays with my son when he grows older.

Celebrating Chinese New Year now isn’t what it used to be. It used to be much more festive and we kept up with traditions, like writing fai chun（揮春; Chinese blessings written in Chinese calligraphy on red banners）and sticking them all over the house — but we don’t do that in our family anymore.

We also used to burn firecrackers together outside in the park, which was great fun because the noise brought on the Chinese New Year spirit. It almost felt like an indispensable activity to kick-start the new year with good cheer.

Burning firecrackers has become illegal in Hong Kong, but we don’t even bother with popping the paper ones. It’s much quieter now and people mostly only celebrate behind closed doors. I loved going to my relatives’ homes on the first two days of the Chinese New Year （初一、初二） to bai neen and play with my cousins. Getting red packets was undoubtedly a perk for us little ones back then, but I loved how the occasion gave us extended bonding time with our loved ones.

It meant so much to us to stick to tradition and share the love through bai neen that even if people were poor, we would go out of our way to borrow money to pack into red packets. I still go bai neen with my relatives these days because I don’t see them as often anymore, but it’s mostly done only within my generation of the family.

The kids find it old-fashioned. They like the part where they get red packets, but they don’t value seeing and catching up with the extended family as much.

Nowadays, people don’t communicate with each other as much though. Yes, we all have convenient mobile devices that lets us send and receive messages instantly, but we’re not communicating properly on them.

They probably cause or aggravate conflicts instead, because people only express their own stance on things when they’re texting, but don’t really try to understand what the other person is saying.