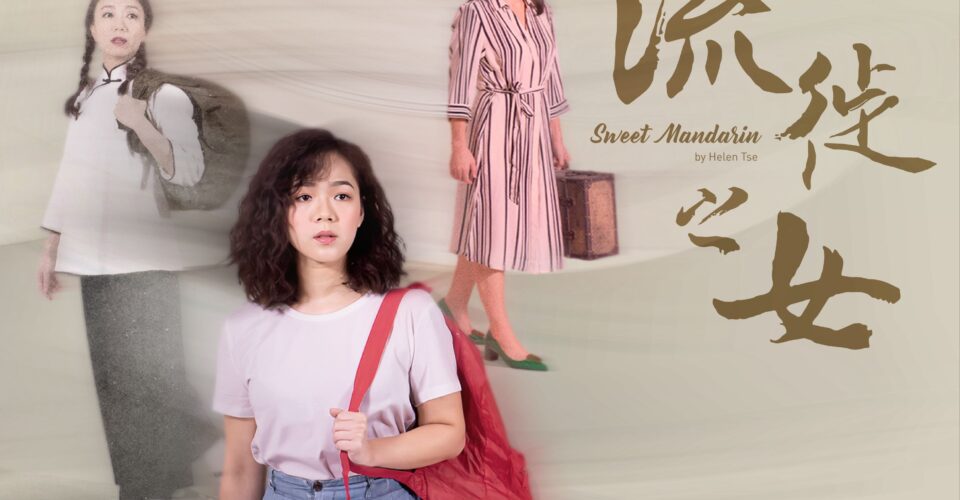 The Jockey Club New Arts Power series aims to highlight the best artistic talents in Hong Kong. As part of its 2020/2021 lineup, the series includes a weekend-long production of “Sweet Mandarin.” This poignant tale, which spans time and geography, tells the story of a Chinese diaspora family and the importance of food.

“Sweet Mandarin” is presented by Pants Theatre Production and is led by Artistic Director Wu Hoi-fai. We chatted with the director about the play and his views on the diaspora community – and we got some performance tickets to giveaway, too! What story does “Sweet Mandarin” tell?

We adapted the story from a memoir – a novel – by Helen Tse, the original writer. She’s British-born Chinese and she wrote this book, “Sweet Mandarin,” in 2005. In it, she tells the story of her family, beginning with her great grandfather in Guangdong and how he brought his family to Hong Kong. This was around the Second World War. So, Helen’s grandmother, Lily, grew up in Hong Kong and in the late 50s or early 60s, she went to the UK.

Lily was an overseas Chinese without any special talents, and eventually, she started her own takeaway business near Manchester and brought her daughters to the UK, too. This is where Helen and her sisters were born, but she was never really happy with her Chinese identity. She did well in school and became a lawyer, but then one single incident changed her life. In the 1990s, Helen’s company posted her to Hong Kong and she took the chance to bring her whole family back there. It changed her views. She decided to give up her job, set up her own restaurant in Manchester, and began writing books, cookbooks, and even this memoir.

How did the idea for staging this production come about?

I read this book in 2007 when I was studying for a Master’s degree in London. At the time, there was a murder case, where the owner of a Chinese takeaway in Luton was assaulted by some British youngsters and eventually died. I realized I wanted to know about the situation of the Chinese in the UK, so I started doing some research. To my surprise, I found that although the Chinese were a big minority in the UK, there were only a few books about them, one of which was “Sweet Mandarin.” So, I read the book and was quite impressed, so I decided to adapt it into a stage drama.

This was the first time I’d been away from Hong Kong for a long time, and I realized that my identity as a Hongkonger was important – this book touched a nerve for me.

When did the crew start planning and rehearsing for the show?

We started researching about two months ago. At the beginning of the year, we found out we were going to be featured in the Jockey Club New Arts Power series, so I gathered the cast, and we actually began rehearsing in July.

Were the rehearsals affected by Hong Kong’s third wave of COVID-19?

Yes. We began rehearsing at the beginning of July, but we stopped because the virus situation became serious again in mid-July. We had to stop and wait until the beginning of August; when the situation improved, we were able to resume rehearsals. The real issue is the uncertainty. Even while rehearsing, we weren’t sure whether we’d be able to get into the theater. But, just last week, they announced that performances in front of live audiences would be allowed from October 1. So we’ve just kept rehearsing and are keeping our fingers crossed.

Sweet Mandarin has been performed in different cities now. Have you made any changes to this Hong Kong show?

The play premiered in 2015 and was featured at Hong Kong Theatre Month at the Shanghai 1862 Theatre. We’re really honored to be presented by The Hong Kong Arts Development Council again at the JCNAP festival. We kept polishing the performances, but we didn’t make any major changes, we just shortened it a little and improved the pace of the story. We also had to reconfigure the setting as the stage and audience placement were different in the Shanghai and Hong Kong theaters.

How have audiences reacted in different cities? Is there any difference between the way that they react to the play, for example, in Shanghai and Hong Kong?

Well, yes. They all follow the story and towards the end of the play, when Helen’s restaurant finally opens, we have a sequence to show the restaurant is open, and in both Hong Kong and Shanghai, the audience clapped and were excited to see the opening.

At the end of the play, we use a real curry in the scene so that the audience can actually smell is throughout the auditorium. In Shanghai, the audience isn’t that familiar with curry, so I had a lot of people asking if they could taste it; this doesn’t happen in Hong Kong because South Asian cuisine is quite common here.

What do you hope that the audience will take away from this show?

I had the idea for this play in 2007, but we didn’t premier it until 2015. It was one of the plays in what I call the diaspora trilogy – one is “Gweilo,” the second is “Yellow Face,” and the third is “Sweet Mandarin.” I created this diaspora trilogy in 2010; at that time, there was a lot of discussion about identity in Hong Kong and I wanted to explore this topic in a theatrical way through the eyes of minorities in Hong Kong.

To my disappointment, I think we’re now seeing another period of diaspora, with a lot of Hongkongers thinking about whether to emigrate and move out of Hong Kong. I think in the age of globalization, whether you stay in a place is not important. The important thing is that people think about what’s valuable to them and what they love, and to pass on that diaspora identity to others. That’s what I want audiences to take away from this performance. Fancy going to a (socially distanced) theater performance? We’re giving five lucky readers the chance to win a pair of tickets to a performance of “Sweet Mandarin!” The tickets will be for the 230pm matinée on Sunday, October 11.

The winners will also be invited to an exclusive post-show tea gathering at Luk Yu Tea House (Stanley Street, Central), which will be held on Saturday, October 31, from 1230pm – 230pm. At the gathering, you’ll enjoy some light Cantonese dishes while the speakers – Director Wu Hoi-fai, Tinny Cheng (Founder of The Culturist’ magazine), and Uncle Siu (Founder of Uncle Siu’s British English Club on Facebook), discuss the show, the underlying meaning of Chinese and Western food culture, Hong Kong food in foreign countries, and how food inspires art.

Simply fill in the form below for your chance to win this exclusive offer!

Enter by 12pm, Thursday, October 8.
Winners will be contacted that afternoon.