What’s the Deal with Bamboo Scaffolding? 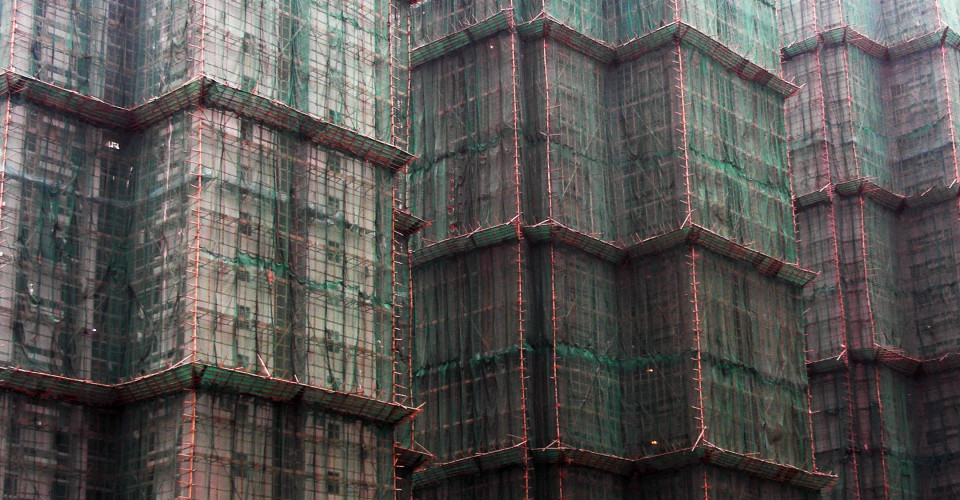 Bamboo scaffolding may appear fragile, but it is really a time-proven technique that goes back at least a thousand years. If you look closely enough, you can spot bamboo scaffolding in the famous painting “Along the River During the Qingming Festival,” by a Song Dynasty artist. A bamboo scaffolding structure in the painting “Along the River During the Qingming Festival.“ Photo: Wikipedia

In Hong Kong, bamboo scaffolding is used as the primary method to build skyscrapers, which at first glance, seems a little frightening. It takes only about a day to put up a 1,000-foot-tall scaffold using bamboo and Hong Kong uses up about 5 million bamboo rods, each 7-meter-long, every year.

Compared with iron rods, bamboo rods are cheaper, faster to build, and easier to transport. Despite their appearance, bamboo rods are actually safer, as they are much lighter than iron rods and cause less damage if they fall.

To build bamboo scaffolding, which can be as gigantic as the Four Seasons hotel, it only requires three things: bamboo rods, scissors, and plastic fiber straps. Workers often set up scaffolding in the middle of the night, eight hours at a time.

Though it’s most common to see them at construction sites around town, that’s not the only use. Bamboo scaffolding has also been used to create temporary Cantonese opera theaters and worshipping halls for community festivals, most notably the Yu Lan Ghost Festival and Cheung Chau Bun Festival.

In 2000, architect Rocco Yim designed a gorgeous, abstract bamboo structure for “The Festival of Vision – Hong Kong in Berlin.” Several bamboo scaffolders were invited over to Berlin to build the work of art. According to the scaffolders, at first people were skeptical about the strength of the structure. But when it was all said and done, people in Berlin were blown away, and the bamboo installation later won an award from the Hong Kong Institute of Architects.