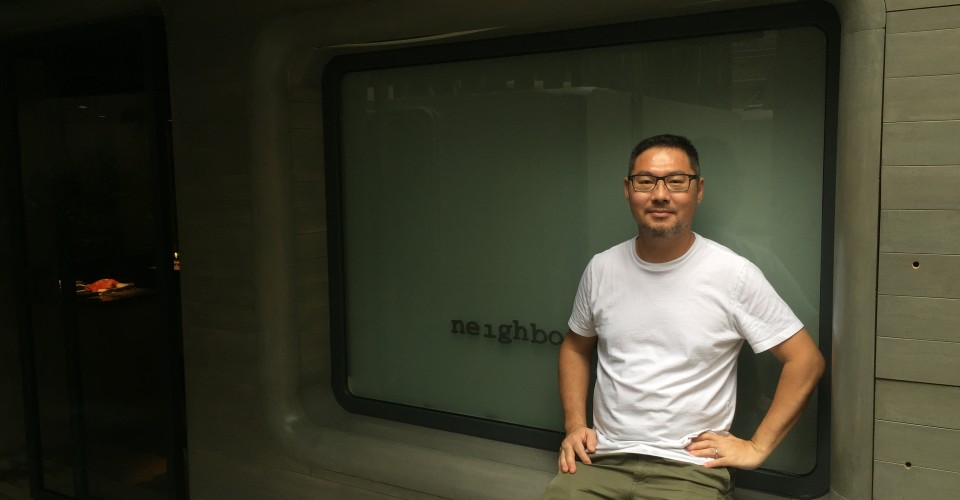 David Lai, the chef and restaurateur behind Fish School and Neighborhood

David Lai now runs cozy establishment Neighborhood off Hollywood Road, but the serial restaurateur has a string of projects under his belt. He was the brains behind On Lot 10 and Kushiyaki Beco in PoHo (both now closed) as well as the original Bistronomique in Kennedy Town (now sold). He’s also the co-founder of Fish School in Sai Ying Pun with Yenn Wong.

Lai tells us what every aspiring chef should do to enrich his or her skills, and why he’s happy to have earned his chops before the molecular gastronomy movement.

Born in Hong Kong, David Lai went to school in the west coast and earned a fine arts degree in LA before trying his hand in different restaurant kitchens all over San Francisco. He landed a gig at one of the top restaurants in the Bay area, Masa’s (now closed), by first working for free and then taking up a butcher position. He went on to work at the Ritz-Carlton in San Francisco, and then moved back to Hong Kong to help open Spoon by Alain Ducasse. Eventually he decided to experiment with projects of his own, and he’s now a respected restaurateur in his own right.

What was the San Francisco food scene like when you first started working in the industry?

When I started in the Bay Area, it was very exciting. Food was serious entertainment, especially in Berkeley where you had Alice Waters of Chez Panisse. I used to live a half block from there. The menu changed weekly and they put a stack of photocopies for people to take home — I used to collect those menus.

At the farmers’ markets you could find the most beautiful produce. Also there were a lot of used secondhand bookstores. Because of the culture of the city, there were really good books in circulation, like European cookbooks. Up to that point I couldn’t afford to travel, but through the books I got some good preliminary education.

You speak of belonging to a certain generation of chefs, and missing out on the molecular movement. What was the difference?

I think in the Ducasse era, it was about the Mediterranean label, but really it was more grandmother’s cooking: rustic countryside cooking that was elevated using better ingredients, better techniques. I learned [from this era], stylistically. That was my foundation.

In some ways I’m quite happy I missed the molecular boat, and sometimes I do feel sorry for the cooks who missed my boat. Probably between 1995 and 2005, molecular gastronomy was at its peak and all the chefs, most chefs in Spain, London or Scandinavia, they all had some exposure to its techniques.

The priority [of molecular movement] was not so much in the cooking, it was on making something new. A lot of people coming out of that era don’t know how to roast a chicken, how to make a sauce. They’re of course good at other stuff, but their shelf life is relatively shorter. For example, molecular is sort of out of vogue now — meanwhile you still need the basics.

I think seafood, fish. Because you never know exactly what you’re going to get, it’s like a treasure hunt. Depending on the fish, some are more suitable for raw preparation, and grilling it is very good, it’s such a primal kind of process.

One of my favorite fish is the moray eel. it’s not an expensive or deluxe fish per se, and when it’s not a deluxe fish usually people don’t catch it so often, it’s more a by-catch. The skin of the eel is very thick, very fat, it’s got lots of bones. It’s quite unique.

At the end of the day one of the best things cooks can do is travel. It’s very important that they have another reference in terms of culture. I think when you go abroad it’s a bit like a reality check. You get to see what is Hong Kong, what is not Hong Kong. Whereas if you’re always in Hong Kong, that’s all you’ll ever know. You know Hong Kong Italian, Hong Kong French, and that’s it.