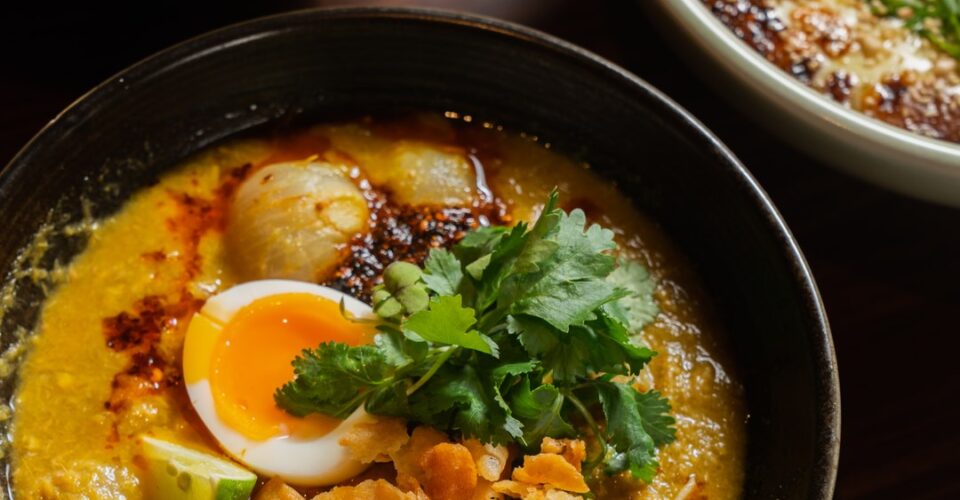 A Taste of Burma: You can find almost every cuisine in the world in Hong Kong. But Burmese food has been particularly elusive. Now though, the city is getting its first authentic Burmese restaurant with the opening of Club Rangoon in Soho. On the Menu: Founder Nelson Htoo looked to his childhood memories of Myanmar when conceiving of the menu, which is split into small plates, salads, noodles, large plates, sides, and desserts. The large plates are mostly stews, curries, and biryani dishes. A must-try has got to be the mohinga ($170), Myanmar’s national dish that features rice noodles in an herbal fish broth. Club Rangoon’s take incorporates a lemongrass catfish broth, crispy fried split peas, boiled egg, and housemade chili powder.

We head in to try their set lunch menu ($220) which is a surprisingly hearty—and delicious—treat. Kicking things off is the La Phet Thoke, a version of the classic Burmese tea leaf salad; it’s full of flavor and boasts a great contrast in textures, but it will be overly salty for most palates. Next up at the Samusa (samosas) which are available with potato and mutton filling—both are great and hint at the Indian influence in Myanmar. The set lunch also includes a selection of large plates, and we choose to sample the Wat Thani (Burmese Pork Stew) and Shwe Phayone Thee Hin (Burmese Pumpkin Curry). Both hit the spot in terms of flavor—especially since they’re served with fragrant coconut rice—but the former wins thanks to the tenderly cooked meat; the pumpkin is somehwat overcooked, meaning it’s a bit mushy when you try to eat it.

Great For: A hearty meal and drinks to set the tone for a night out on the town.