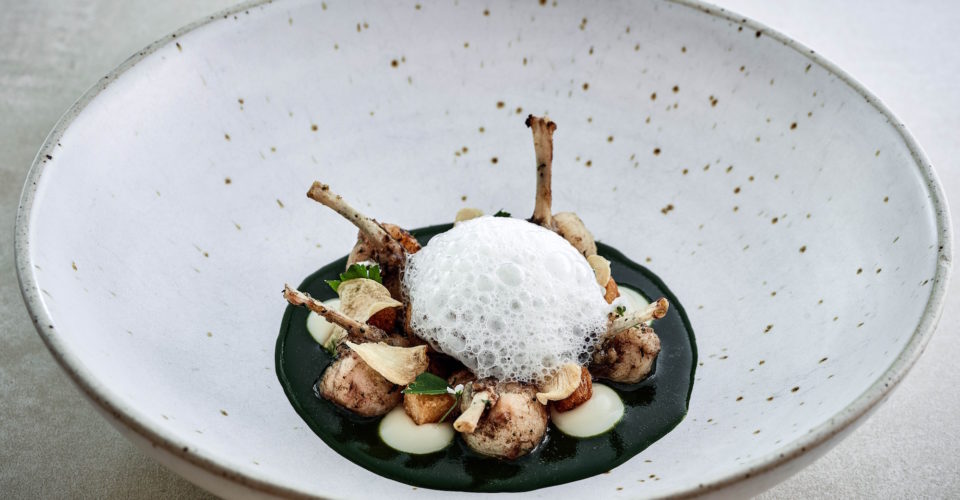 Shortly afterwards, the chef behind the establishment, Julien Royer, announced that he’d be opening a casual French eatery in Hong Kong. Eyes have been on him ever since. This month, his new venture opens its doors; Louise is a stunning space serving classic French fare with a twist.

First there’s the Parlour, with cosy grey banquettes and tropical touches that mirror the greenery outside. Past the Parlour is the colorful Drawing Room, which can be booked for private events. Venture upstairs and you’ll find the Dining Room that’s done up in white, cream, and mustard yellow. Each floor has outdoor terrace seating, too. On the Menu: Louise is all about traditional French fare. The menu is inspired by Royer’s childhood at the family farm in Auvergne; he even sources ingredients from various family farms in Hong Kong and France himself. More casual dishes, such as pâté en croûte and beef tartare with fries, are served in the Parlour. There’s also a cheese and charcuterie bar, a wine bar, and a selection of pastries.

A more extensive menu — appetizers, mains, sharing plates, and desserts — is on offer in the Dining Room. Think dishes like angel hair pasta with Kristal caviar, black truffle, and kombu, heirloom tomato tart with burrata and basil sorbet, and even more locally inspired bites such as the Hong Kong frog legs with parsley and garlic crisps (pictured).

Meet the Chef: French chef Royer honed his skills under the likes of Michel Bras and Antonin Bonnet, whipping up dishes in his native France, London, the French West Indies, and Polynesia before moving to Singapore, where his restaurant Odette boasts two Michelin stars.

FYI: Reservations are accepted at the Dining Room, but not at the Parlour.