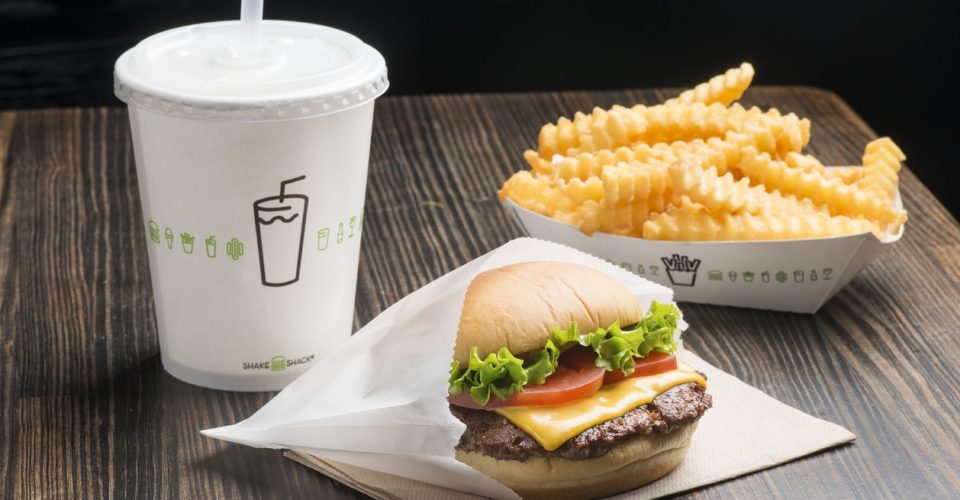 Shake It Off! After a whole lotta buzz leading up to its opening, classic New York burger purveyor Shake Shack finally opens in Hong Kong, offering up its fast — yet conscientious — food to the city. This outlet adds to the franchise’s 50+ locations across the globe and 90 locations in its native USA.


Look & Feel: Perhaps harking back to the first Shake Shack in Madison Square Park in New York City, the casual burger joint’s Hong Kong branch sits in a breezy location on the rooftop of IFC. Inside, it’s roomy and casual with both bar-style seating and low tables.


On the Menu: For those who haven’t chowed down on Shake Shack’s burgers elsewhere: Shake Shack’s menu is short and sweet, featuring six burgers, two hot dogs, fries, and shakes and ice cream. Choose between an Angus beef patty, crispy chicken patty, or muenster and cheddar cheese-filled portobello mushroom patty in a potato roll with various toppings. But the burger shop’s claim to fame is in the care it takes with its food rather than having a dizzyingly varied menu. Shake Shack’s meat is all-natural, while its sauces are made in house. Jeng: There’s something weirdly addictive about the signature house-made ShackSauce, and the frozen custard take on milkshakes makes for a smoother, more indulgent shake. It’s also refreshing to encounter a gourmet fast-food burger that won’t break the bank — all of Shake Shack’s burgers are under $100.

Not So Jeng: We at The Loop HK have quite the sweet tooth, but we wonder if some of the desserts, such as the vanilla milkshake and the chocolate fudge “concrete” (frozen custard blended with toppings at high speed), are a little too saccharine for most locals’ milder tastes.

Great For: A casual bite with friends pre-movie or post-shopping trip.

FYI: Some of the sweet treats on the dessert menu are inspired by Hong Kong’s dining culture and will only be available at the franchise’s Hong Kong location, such as the Milk Tea Shake and The Heart and Tart of Central (vanilla custard, egg tart, strawberry puree).