Look & Feel: Upon entering the venue, guests are transported into a calming space full of zen elements. The 3,380 square foot restaurant can seat over 100 guests, and the decor incorporates natural elements with wood flooring, metallic accents, and a clear acrylic temple roof giving the impression of airy lightness above the central bar.

On The Menu: The restaurant recently launched a 24-course Sunim Temple Menu, based on the chef’s three month sojourn to a Buddhist nunnery where he studied under his mentor, Buddhist nun WooKwan. The healthful yet extravagant menu features an array of small dishes served on wooden trays, a reflection of temple food traditions. 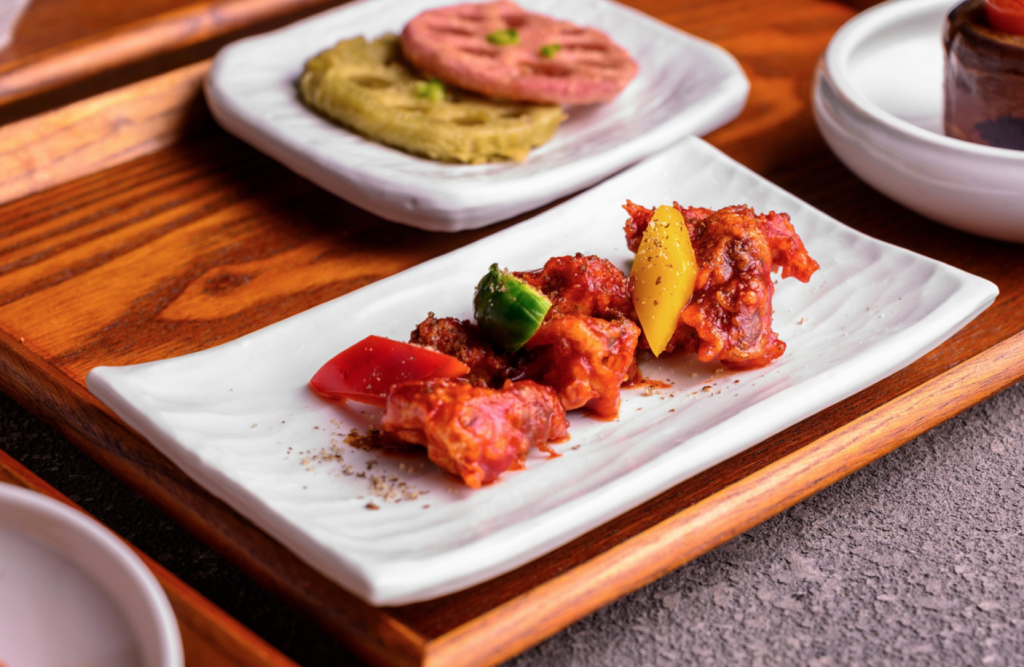 The massive tray for the main course holds a bowl of chewy yellow rice crowned with mushrooms as well as eight small dishes ranging from green chilli pancakes, salad, kimchi, glass noodles and vegetable broth. Particular applause goes to the fermented soy bean dressing on the salad, which is reminiscent of blue cheese! A chewy, subtly sweet dish of sesame crackers, dried persimmon and barley water concludes the extensive menu. Jeng: You feel like you can let loose and indulge without going overboard in gluttony. Everything is light on oil and made from vegetables, so basically there’s no calories right?

Not So Jeng: The Sunim Temple Menu (priced at $780) is only available on weekdays at lunch time, and requires a one day advance booking. However, the a la carte menu, which features many of the same flavors, is available throughout the day.

Meet the Chef: With a degree in electrical engineering, Chef Gu Jin Kwang did a U-turn with a masters program in culinary arts. The friendly, easy going chef has over 25 years of culinary experience working in Europe, and South Korea, and was mentored by culinary greats the likes of Albert and Michel Roux. Passionate about traditional Korean temple cuisine, Chef Gu studied for six years at the Mahayeon Temple Food Cultural Centre, where he met Buddhist nun WooKwan. Soil to Soul’s menu is an accumulation of his years of diligently studying the principles of buddhist temple cuisine, and his adaptation of this unique genre to mainstream palates.

Great For: A restorative meal that feels cleansing without compromising on flavour and enjoyment. It’s also a happy compromise if you ever want to dine with vegan and meat-lover friends at the same table.