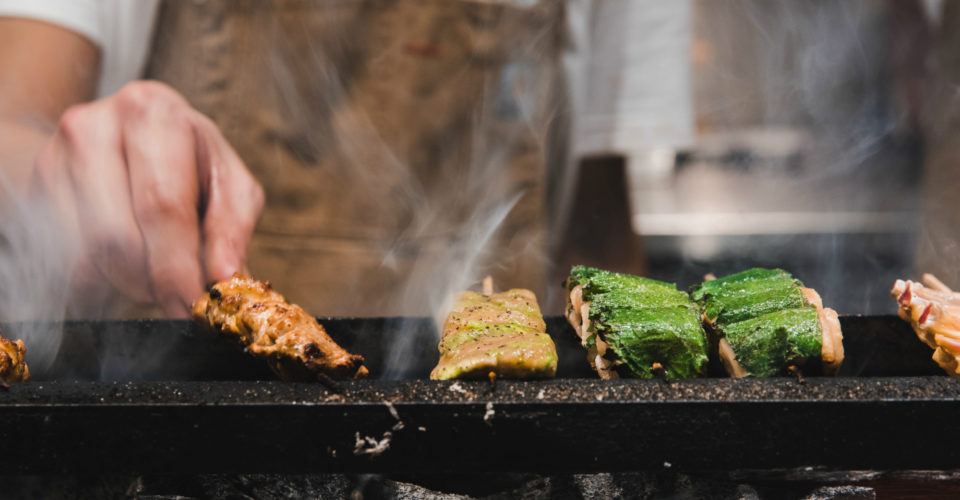 Yakitori Masters: The Hong Kong F&B scene is ever-evolving. Restaurants that are jam-packed on opening night can be seen unceremoniously closing their doors merely weeks later. That’s what makes Yardbird such a rarity: it’s one of the few that generated buzz as a hip, trendy hotspot upon opening, but has also stood the test of time, continuing to attract crowds six years down the line. Perhaps this is why the yakitori izakaya made the move from its intimate space on Bridges Street to a more spacious location on Wing Lok Street.

Look & Feel: With a bigger space comes an elevated look. While the original Yardbird was a two-story, intimate affair, Yardbird 2.0 has really opened up — but is divided into a combination of booths, tables, and bar space to preserve that intimate mood. The design was created by chef and owner Matt Abergel and interior design firm Sean Dix, marking the fourth time the two have worked together. The new restaurant is clean, modern, and not without a share of industrial flair. You can catch all the cooking action by looking in at the open kitchen. On the Menu: Yardbird is all about the chicken. Look for all kinds of overlooked poultry parts, from heart to tail and everything in between, grilled over traditional Japanese binchotan charcoal. There are chicken meatballs, which you dip in a runny egg yolk ($48), but also chicken heart and gizzard ($45 each). The restaurant also took advantage of the move to expand its menu, fleshing out its non-poultry offerings. You can still expect old favorites such as the sweet corn tempura ($110) and KFC (Korean Fried Cauliflower, $110), but also new rice and noodle dishes. Chef Abergel has introduced a new charcoal grill specifically for vegetables too. The bar menu is equally impressive, full of hand-picked sake, shochu, Japanese whiskey and creative cocktails.

FYI: Join the swarms outside — this spot doesn’t take reservations — and do leave big tips as this is a no-service-charge affair.