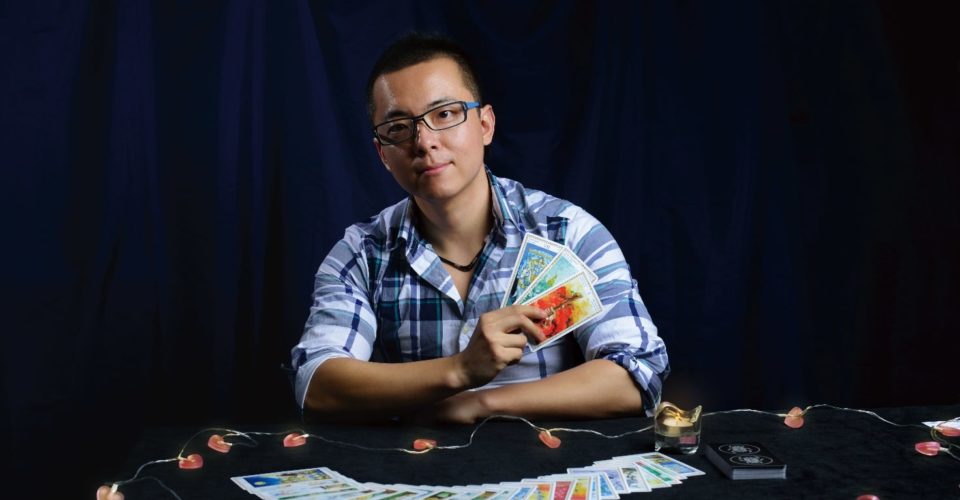 Letao Wang is the enlightened mind behind The Healing Kingdom, a one-man-show specializing in tarot reading, cartomancy and astrology. Over the last few years, Letao Wang has made a name for himself among those who seek answers and reassurance to life’s many confusions and dilemmas.

Letao Wang fell into tarot cards rather by accident, as a young university student in Sydney. He was pursuing a more conventional line of study when, purely out of curiosity, he stumbled into a shop and had his cards read by the man who would later become his mentor. When all the predictions from the reading made sense several months later, he decided to visit again — and repeated the process of reading and actualization. Later, when told he would make a good reader, Letao decided to pursue his interest in tarot cards.

5 Things You Should Know About Tarot Card Reading, according to Letao Wang

Most people don’t realize that being a tarot card reader is a difficult, but very unique profession. We sometimes face a lot of backlash from the scientific and religious communities. But the reality is that there’s nothing mysterious, spooky or taboo about what we do. All we’re doing is interpreting the cards through our higher selves. I hope people become more open-minded about reading. If you haven’t had a reading before, just imagine this is a little bit like going to see a psychologist.

2. Most people ask the same things

Most people that come to see me ask about the same things. It’s usually questions about love, career, money, and investments. Hong Kong is a very transitional city, so I have a lot of expat clients asking me about relocating and whether they should follow their partners overseas. I also get a lot of family-related questions about things like pregnancies and children, or difficulties with parents

3. You retain full control over your future

People really need to know that at the end of the day, we’re not really predicting the future. The first thing to understand about tarot cards is that they’re just picking up on your personality and tendencies. It’s like going to see a psychologist – they’ll ask you about things directly, but with tarot cards, it’s indirect, more interpretation and inference rather than direct knowledge. All the cards are doing is helping you figure out where you’re at, and what you could do to achieve what you want. You still have 100% control over whether you keep doing what you’re doing, or try and change to reach your goals.

The cards can only do so much. If you want to get the most out of your reading, I always recommend that clients come to a reading sessions prepared with a sense of purpose and specific questions. For example, something like “Should I take this new job offer I’ve received?” will give a more useful reading than “Tell me something general about my life?”

Tarot card readings are not always about finding out how the rest of your life is going to be. Things can change depending on the decisions we make and actions we take. So look at this as more of an overview of the next few months. Many of my clients see me every six months or so, as the cards will change over time as you have different questions and goals.

Looking toward the future?

2019 is going to be an interesting year, but it will bring different things to different people. Jupiter has entered Sagittarius, while Saturn is in its own sign of Capricorn. When a planet is transiting its own sign, the influence is very powerful. For Aries, Sagittarius and Leos, the new year will bring a lot of adventure and new horizons – there could be a lot of travel opportunities. For Capricorns, Taurus and Virgo, hard work will bring good results — think of this as empire building, any effort will influence the future.