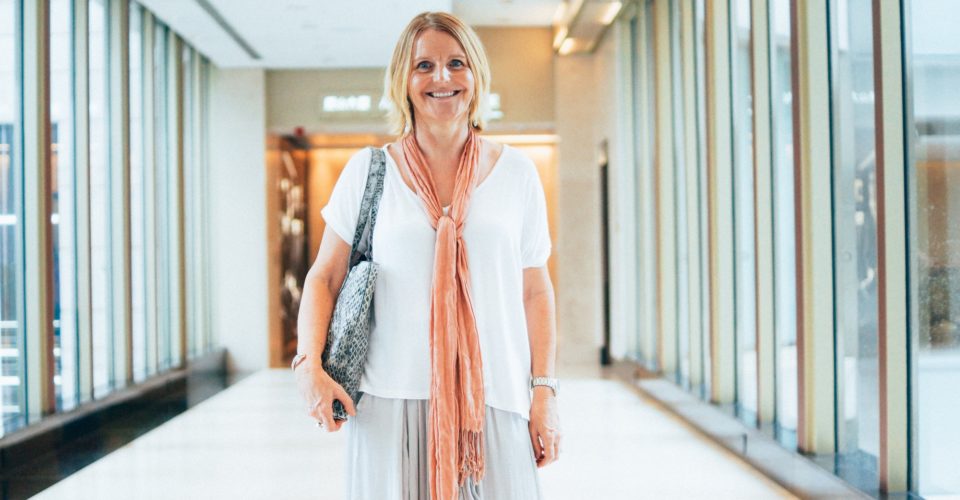 You don’t have to be a parent to realize that there are some serious societal shortcomings in Hong Kong when it comes to issues like maternity leave, paternity leave, public breastfeeding and a misguided demand for baby formula. We’ve enlisted Caroline Carson, a leader of the La Leche League Hong Kong, to walk us through the issues, and why they should matter to all of us — not just parents.

Originally from the UK, Caroline Carson got involved with the Australian Breastfeeding Association while raising her two children in Australia. When she moved to Hong Kong in 2010, she joined La Leche League and quickly realized the city’s unique shortcomings regarding breastfeeding. She became a “leader” in Hong Kong, representing the organization, supporting mothers, and helping mothers to cut through the mountains of misinformation. Originally started in the US, La Leche League is an independent nonprofit that has thousands of branches all over the world, with a mission to support mothers who are breastfeeding.

5 things you should know, according to Carson

The first challenge is that there is poor information about breastfeeding in the medical system, and just generally. Particularly in the hospitals — a lot of hospitals say that they support breastfeeding, but their actual practices don’t demonstrate that.

For example, they will send you to a separate room or only allow breastfeeding at a certain time of day, which of course is not supportive at all. So that’s one problem. In some cases, they separate mothers and babies, which makes breastfeeding harder. Private hospitals are better than public but still very inconsistent in the support they give. Within the medical profession there’s very poor knowledge about breastfeeding, and mothers often are given completely incorrect information. For example, they are told to pump or to formula feed, when for them it is actually not necessary.

According to the Department of Health, only 12 percent of pediatricians have any training in breastfeeding at all, which is kind of shocking because it’s the natural way to feed a baby in the first 12 months of life. And so then, if you think about the more general area of a public hospital, employees might not be properly trained and might be reflecting a personally held belief.

You have probably heard that in Chinese culture, a big fat baby is a sign of health, so even today, there’s a lot of pressure on moms to top up with formula even if it means that the baby is actually being overfed.

Now there’s no regulation at all on the marketing of formula and, as a result, there are some very misguided beliefs. The Department of Health published a study in 2013 which confirmed that people have been deeply influenced by formula advertising. So if you have a lack of correct information available regarding breastfeed in the medical community, and you also believe that formula is better than breastfeeding because of millions of dollars of marketing and advertising, then you know, those are pretty challenging conditions.

In 2011, the government proposed introducing legislation to regulate the marketing of formula following what’s called the WHO Code (World Health Organization), but it’s gone nowhere. The WHO Code is a code of conduct which restricts the promotion of formula. All the big manufactures of formula, like Nestle, have signed it. But unless the country a) legislates and b) enforces legislation, then they’ll just do whatever they want. Part of the reason these companies spend so much money in Asia [$2.4 billion last year] is because it’s less regulated than other countries.

Every once in a while you hear about a coffee shop or a hospital that has discriminated against a breastfeeding mother, and the situation generates a lot of backlash. While it’s really distressing for the poor mother in that situation, it’s positive in a way because of the publicity it generates.

The recent hospital instance is very disappointing, because it’s a hospital. You know? But it wasn’t surprising to me because of the lack of education by health professionals — even health professionals working in maternity and child health might not be trained appropriately.

4. Short maternity and paternity leave is bad for everyone
Current maternity leave is 10 weeks, and some employers insist you start it two weeks prior to your due date. Paternity leave is only three days! It takes a minimum of four to six weeks to fully establish breastfeeding and a supply. So this means moms have a very short time to get familiar with both their baby and feeding. This can make the whole experience very stressful when it shouldn’t be.

The short paternity leave and long working hours in Hong Kong mean many dads get very little time to be with their babies and don’t always feel comfortable with baby care. This means the cultural expectation that childcare is women’s work continues in many cases. It means often dads don’t fully understand how time-consuming breastfeeding a new baby can be, which can lead to an unintended lack of support — undermining the mother’s confidence and leading to an early cessation of breastfeeding.

There’s such a huge list of benefits but I hate to use the term ‘benefits.’ Breastfeeding is the biologically normal way to feed your baby. If you use formula, it doesn’t necessarily mean you are doing the wrong thing for your baby. We have seen from studies that 95 percent of mothers want to breastfeed, but sometimes they can’t because they don’t have any support or the right information.

Every woman’s breast milk is different, and it’s even different for each child they have. It’s totally unique! It produces antibodies against infections and supplies a perfect nutritional balance for the baby. It protects a whole range of things for the baby, including obesity, ear infections, gastrointestinal infections, and lots more. It also provides protection for the mother against a range of cancers among other things.

I think the good thing is that the government has recognized that this is a public health issue, and there have been estimates done to show how much money would be saved in the public health care system if breastfeeding rates were to increase. So people wouldn’t only be healthier, but Hong Kong would also save money.

The good news is that breastfeeding rates are improving, slowly. In the past 10 years, it’s gone from something like 8 percent to 24 percent of women who are exclusively breastfeeding at four to six months in Hong Kong, while 86 percent have at least tried breastfeeding on discharge from the hospital.

The government is putting a lot of effort into public campaigning for supporting breastfeeds and making it seem “normal.” It is normal but it’s not necessarily perceived as normal in Hong Kong. I would love to see some breastfeeding-, baby-friendly accredited hospitals in Hong Kong, which is a UNICEF initiative. They apply 10 principles in their support of mothers and babies to introduce and sustain breastfeeding. The program has been going in Hong Kong for 15 years and we still don’t have any breastfeeding-friendly hospitals. That would make a huge difference, because the place where most women get their first information and support about breastfeeding is in the hospital.