Why is Melbourne coffee so popular in Hong Kong? We go straight to the source Earlier in 2016, a popular Sheung Wan coffee shop branched out to Shek Tong Tsui and Brew Bros Hill Road was born. Operating out of a small space similar to its first, the business’s second venture received a warm welcome from Western District’s sleepiest suburb. On the menu: brunch classics and a “genuine Melbourne coffee experience”, with beans from Melbourne roastery Market Lane.

In a 64-foot space in North Point, a hole-in-the-wall coffee shop with a similar theme was opened after its owner, Wing Yeung, spent eight months working as a Barista in Melbourne. On the slope of Graham Street in Central, a warmly lit, bare-concrete coffee shop sports the same theme: Melbourne. Even Sai Ying Pun’s new organic wine and coffee bar makes some reference to the Australian culture capital when asked about their brew. The list goes on.

Melbourne coffee, or Australian coffee more broadly, is a term that has been thrown around a lot over the last couple of years — in Hong Kong and other parts of the world. Similar to specialty coffee, the term is a bit loosely defined.

Unlike Turkish Sand Pot Coffee or Vietnamese coffee, which has a distinct mixing style and brewing method (think Phin-filtered dark roast coffee usually served cold with a 1 to 1 condensed milk ratio), Melbourne-style coffee is more subtle in its distinctiveness. The focus is more on the types of drinks offered, like the flat white (microfoam-topped espresso) and long black (espresso with water).

But what has made these drinks so popular and prolifically imitated? To find out the answer, we talked to coffee connoisseurs straight from the coffee capital.

“I think the term Melbourne coffee is a lot more about the culture than the coffee itself,” says Tyson Stagg, Wholesale Marketing Manager at Market Lane Coffee in Melbourne. “Melbourne has such a huge culture of people who appreciate what they eat and drink, so Melbourne really likes to know where their money is going.” When the Bean is Green

Knowing where Melburnians’ money is being spent starts with where the beans originate from. Ethical sourcing of coffee is something Melbourne roasteries have been working to achieve.

In an interview with Ching Kwok, owner of The Brew Job Coffee, 13 Peel Coffee and Inferno Dynamics Coffee Roastery, The Loop HK was told that cutting out the middleman in the bean supply industry is something his business was trying to achieve. Direct trading is beneficial for both parties as the farmer can earn more and the coffee will cost less for the cafe. Kwok has since established direct trade relationships with coffee farms in Ethiopia, Colombia, Nicaragua and Panama.

While coffee shops cannot be responsible for everything that is happening on the farms, by visiting and seeing the operation firsthand, relationships can be improved. “Being on ground helps establish a level of trust,” Stagg says. Marcel describes Melburnians as “part disruptors, part industry leaders.” An example of this, he says, is in batch brew coffee.

Pour-over coffee has been a popular choice for coffee enthusiasts looking to go past their usual flat white for years. While there may be room for some slight tweaks or improvements, there’s no argument that pour-over has already reached a peak standard.

And so Melbourne has taken on batch brew coffee. Also known as drip filter (the kind of coffee you find in American diners), batch brew has always been known as bitter and poor in quality. But there was nothing wrong with the brewing method, says Marcel. “Essentially you’re making a pour-over coffee but in a larger quantity.”

Six months ago, Verture of the Coffee Drink would have four to five pour-overs being made at any one time. “We’d be lucky to sell two batch brews,” Marcel said. Today, 180 batch brews are being sold each week, and only 10-15 pour-overs.

With some simple but fine-tuned experimentation, Verture of the Coffee Drink and other Melbourne cafes have improved on the flavor and the method. At around HK $50 for pour over coffee and just HK $20 for batch brew, the cost difference is substantial. “[Basically] we’ve made high end coffee more accessible,” Marcel says.

“With batch brew it’s easy to let a customer try a little. You can’t do that with pour-over.” It’s worth noting that Melburnians, similar to Hongkongers, are a very proud people. “Melbourne, part of what you’re writing about it, has become its own brand,” Marcel says. “Melbourne is a brand in what it offers in terms of liveability and what it offers in coffee,” he says.

Baristas from all around the world want to travel here to train, he says. If you’re a barista from Melbourne you’re almost guranteed a job. Asked if  Melbourne baristas are the best, Marcel answers, “It’s not necessarily true, but that’s the way it goes.” Vertue of the Coffee Drink’s roasting machine is in the centre of the cafe. Photo: Joseph Lam

Part of what makes Melbourne coffee so great is the boundaries that have been pushed with brewing methods such as the batch brew. While the term as a whole cannot be simply narrowed down to a coffee style like the three-quarter, ristretto-strength latte available in most modern cafes, it is predominantly milk-based.

The roasting style? “We definitely roast on the lighter side of the spectrum,” says Stagg. Lighter roasting is commonly known as less developed, and more developed would be a darker roast. However, less developed coffee isn’t exclusive to Melbourne. In Scandinavia and America coffee is also roasted lightly. 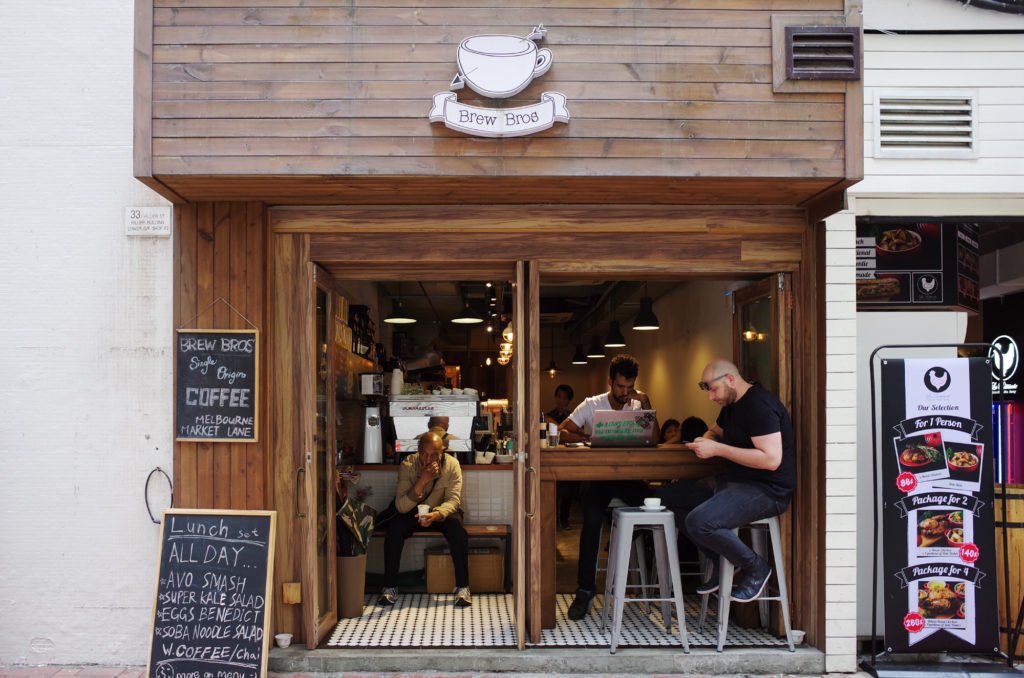 Bringing it back to Hong Kong

How exactly do you serve Melbourne coffee in Hong Kong? First, by understanding what’s on an Australian coffee menu, says Gary Wong, one of the two Australian owners behind hole-in-the-wall coffee shop Nutsy. “I believe the cafe should focus on how to make a good flat white, long black and serve piccolo latte correctly,” he says. Also, if it’s Melbourne coffee then they should use a coffee roaster from there.

The high cost of rent increases the cost of coffee in Hong Kong and hinders its development, says Yeung from Smoko Coffee. “Because of the high price of coffee, Hongkongers might see it as a small luxury and have to choose it as a meal, whereas in Australia they can have both.”