Granted, Kennedy Town has had an MTR station of its own since late last year but this western neighborhood is quickly turning from a sleepy little district to a happenin’ enclave. This westside district is a beautiful balance of old and new, home to stone wall banyan trees as well as some of the trendiest restaurants in the city.

Castelo Concepts restaurants aren’t exactly new in K-Town, but the group recently outdid itself with the opening of Butcher & Baker, a 2,000-square-foot all-day dining space that, as its name implies, contains a butcher’s shop as well as a bakery.
G/F, On Fat Building, 57-59 Cadogan Street, Kennedy Town, 2591-0318.

A visit to Kennedy Town must include a trip to tranquil Lo Pan Temple on leafy, pedestrian-only Ching Lin Terrace. The colorful, well-kept temple dates back to 1884, and is dedicated to Lo Pan, the deity of choice for carpenters and builders. Now you know where to go if you have any construction projects that are in need of blessings from the skies.
15 Ching Lin Terrace, Kennedy Town. Snap a selfie by the stone wall trees
Head to Forbes Street and go straight for the root-covered masonry walls that have been all but taken over by century-old banyan trees. The result is a beautiful mess of roots and rock that look like something out of a Game of Thrones set.

Catch the sunset from the harbor
Kennedy Town being the westernmost point of Hong Kong island, there are some spectacular sunsets to be had — and the best vantage point is right by the harbor. Head to Kennedy Town Praya and snatch a bench, then sit back for the show. Take the tram
Everything starts and ends at Kennedy Town, including the tram. Get a guaranteed seat by being among the first passengers to board at the Kennedy Town terminus.

Brunch like a king
K-Town’s laid-back residential vibe is supported by lots of beautiful venues where you can enjoy a long meal and a glass of wine. Try Kinsale with its gorgeous space and live music on weekends and weeknights, or trendy Shoreditch on Catchick Street.

Hotpot Instinct
This neighborhood haunt has been around for quite a few years, and offers some seriously tasty cheese-filled seafood balls and truffle-dusted meatballs to dunk into sizzling hot broths. The venue is also appropriately hipster, juxtaposing traditional dark green window frames with trendy hanging light fixtures made from pots and pans.
1/F, Kam Ho Court, 144-148 Belcher’s Street, Kennedy Town, 3464-0141. Succumb to your hotpot instinct

Shiba
This cozy kushiyaki izakaya is part of the Keyaki group, and offers juicy, meaty grilled bits on sticks — think everything from chicken skin to squid — as well as a mean selection of sakes and craft beers. There’s an a la carte menu as well as daily blackboard specials.
Shop E, G/F, May Sun Building, 1-15 Smithfield, Kennedy Town.

Sun Hing
The Sun Hing brand has been around for decades although its current location on Smithfield is only a few years old. This dim sum teahouse offers traditional dishes at unconventional hours — from 3am to 4pm daily. Craving something sweet? Look no further than the lava custard buns and the deep-fried crispy milk.
Shop C, G/F, 8 Smithfield, Kennedy Town, 2816-0616. 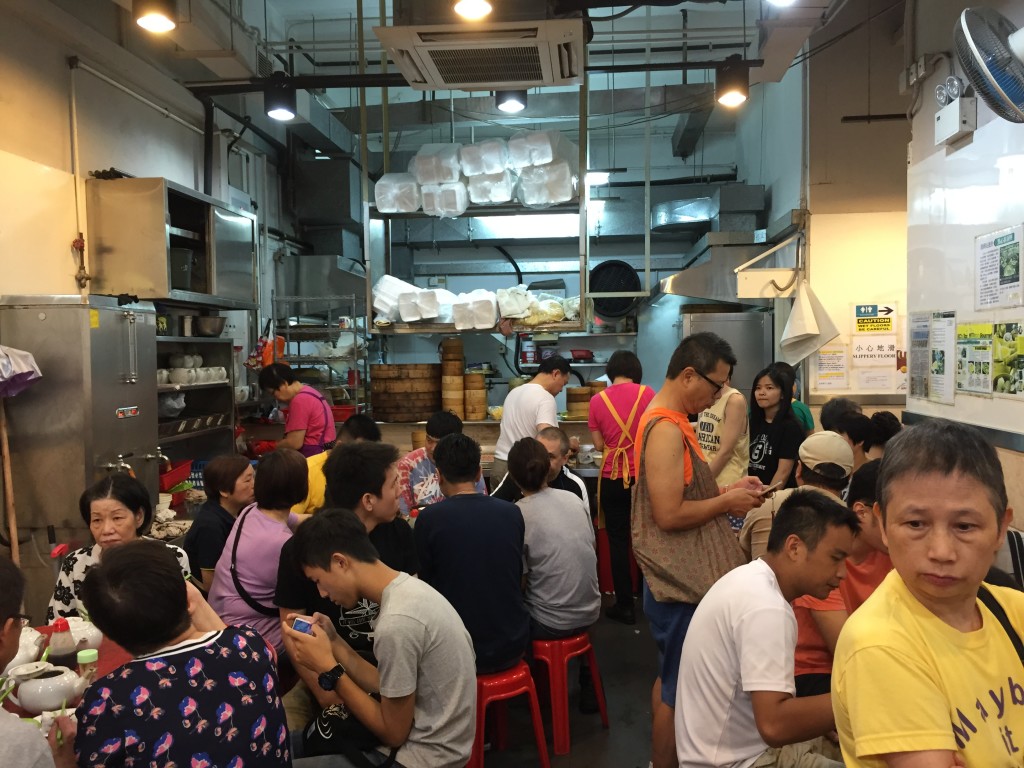 The dim sum at Sun Hing is worth the wait

Catch On Catchick
With an ever-growing list of lofty all-day diners popping up every month, it’s just a matter of time before Kennedy Town becomes Hong Kong’s de facto brunch district. The king of them all is Catch On Catchick, nailing down Australian-style brunch dishes and really taking egg and avocado specialties to the next level. What it lacks in space — it doesn’t even come close to some of its more sizable neighbors — it makes up for in awesome food.
G/F, 93 Catchick Street, Kennedy Town, 2855-1289.

Comptoir
A French “tapas” bar of sorts, Comptoir offers some finger-lickin’ bite-size sharing platters to go along with a curated selection of wines. The ground floor is all bar stools and narrow tables, but there is a private function room that showcases Comptoir’s alcohol selection upstairs, available for hire.
G/F, 42 Forbes Street, Kennedy Town, 2453-9873. 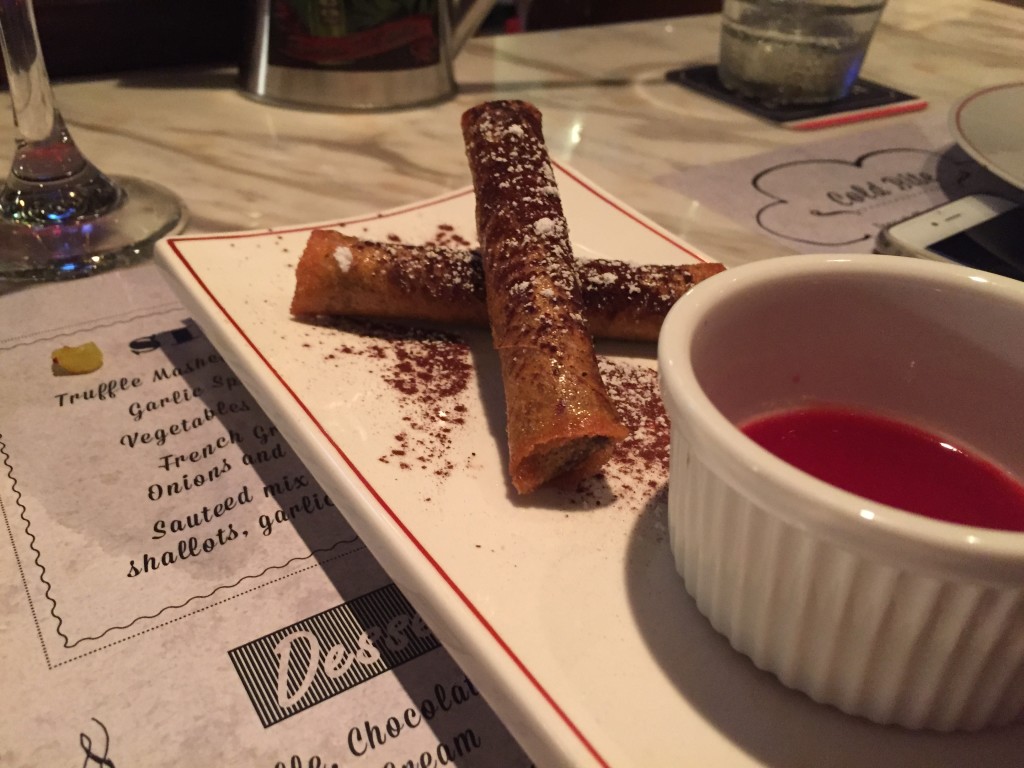 Grab a snack and drink at Comptoir

Missy Ho’s
Skip the food at Castelo-owned Missy Ho’s, and just soak in the vibe (dark, buzzing, with just the right volume of music in the background). This bar is one of the cooler watering holes on this side of town, but blink and you’ll miss it: the camouflaged entrance is unmarked.
Shop G9, G/F, Sincere Western House, 48 Forbes Street, Kennedy Town, 2817-3808.

Summer Ice
This popular waffle shop regularly sees queues outside, and you can catch the wonderful aromas of its freshly made treats just walking down the street. The Belgian-style waffles are crisp and fluffy all at once, and come paired with chocolate, fruits, matcha ice cream and a whole lot more.
Shop D, G/F, Full Harvest Building, 6-18 Hau Wo Street, Kennedy Town, 5541-0655.

Sunday’s Grocery
Don’t be fooled by its name; this “grocery” shop serves delicious sandwiches (the katsu sando being one of its most popular) and stocks specialty alcohol. The space is owned by Matt Abergel of Yardbird fame.
66-68 Catchick Street, Kennedy Town, 2628-6001.

The Cofftea Shop
Get your caffeine fix at The Cofftea Shop, where they make some strong Italian brews to pair with brownies and cakes. The space is tiny — there are no seats — so be prepared for takeaways only.
Shop H, 78-86 Catchick Street, Kennedy Town, 9104-2404.

The newishly relocated Kennedy Town Swimming Pool closed December 2015 for more renovations and should reopen by 2017. To the east? Shek Tong Tsui, which is also a stomping ground of HKU kids and an emerging food haven. To the south? Cyberport’s many residential complexes and offices.