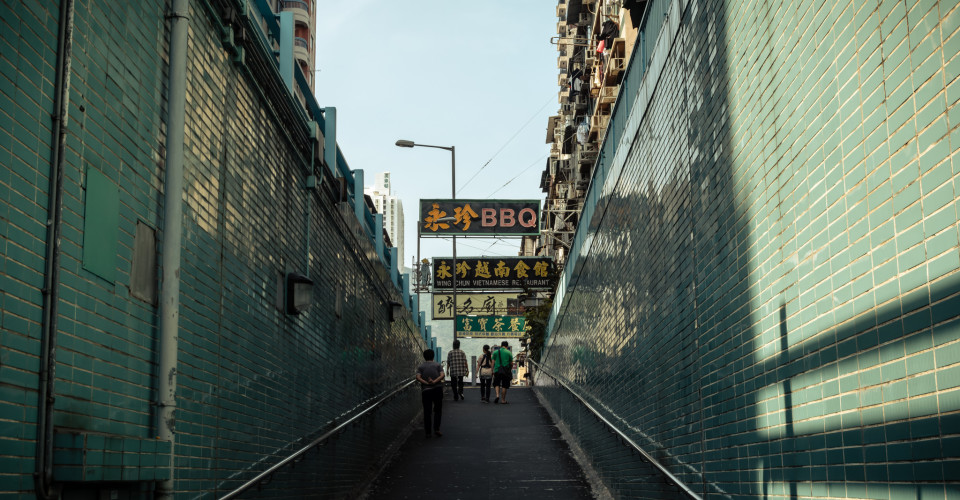 Kowloon City is hiding some of Hong Kong's best-kept secrets.

There’s something oddly refreshing about a Hong Kong hood that isn’t serviced by the MTR — the untouched, unaffected nature of the place feels like your own little secret. Kowloon City is one of our favorites, with its buzzing mix of restaurants, dive bars and a slice of Hong Kong history that’s unique to the area. Here’s how to spend the day in the thick of east Kowloon.

Kowloon City might be unofficially known as Thai Town, but the restaurant scene is quietly diversifying. New kid on the block Hamataki is the latest example, a coy spot that dishes up a mean bowl of ramen with all the fixings.

Such is Kowloon City’s claim to being Hong Kong’s epicenter of Thai food, the easiest way to get to the hood is to tell your taxi driver the name of this restaurant. Located on a bustling corner in the thick of the hood’s grid layout, this two-tiered temple serves up winning renditions of classic Thai dishes.

Perhaps Kowloon City’s biggest claim to fame, though, is the notorious Walled City (Tung Tsing Road, Kowloon City). The densely populated, ungoverned settlement – a one-time Chinese military fort that was also controlled by Triads after the Second World War – is now home to the much more salubrious Kowloon City Walled Park. The park is divided into eight equally tranquil themed zones and features important historical artifacts like its Yamen building, used by religious groups as a kind of shelter, and remnants of an entrance gate. While the outdoor exhibition doesn’t touch much on the hub of vice and crime, it does provide a fascinating bit of insight into the history of the site. 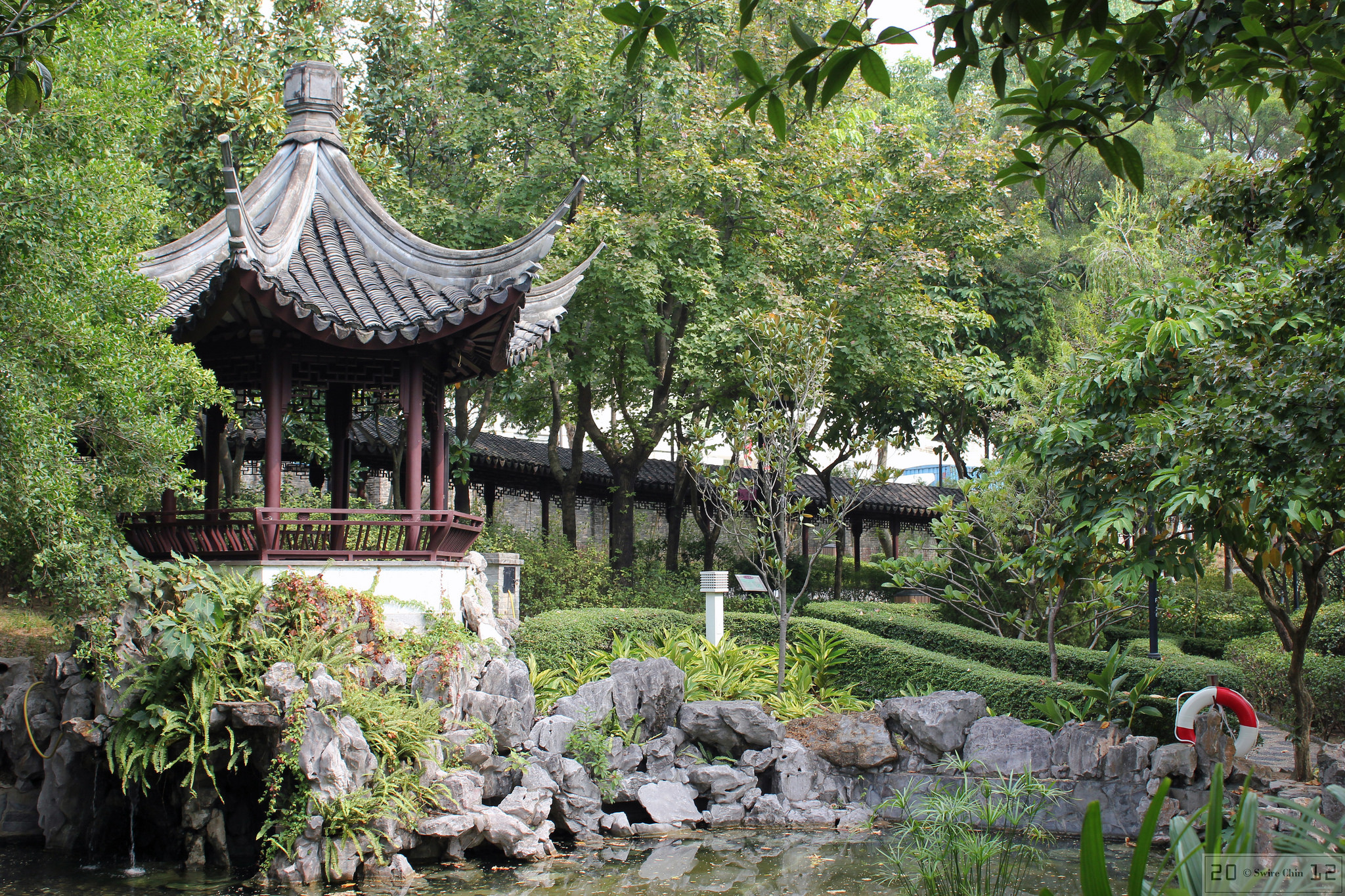 The tranquility of Kowloon Walled City Park belies its seedy past.

Can’t make it to Thailand for Songkran? No problem – Kowloon City is turns on the waterworks every Thai New Year. Taking place in the Carpenter Road Park Playground in April, the all-day festival features beauty pageants, BMX performances, traditional drum performances, and, of course, the traditional water blessings in the form of all-out water warfare.

While the Walled City Park is Kowloon City’s headliner historical attraction, the Hau Wong Temple (Junction of Junction and Tung Tau Tsuen Roads) is also definitely worth stopping by. Built circa 1730, this declared monument sits atop an elevated terrace at the northwestern tip of the aforementioned park, and consists of a main hall, side chambers and a traditional Chinese garden. 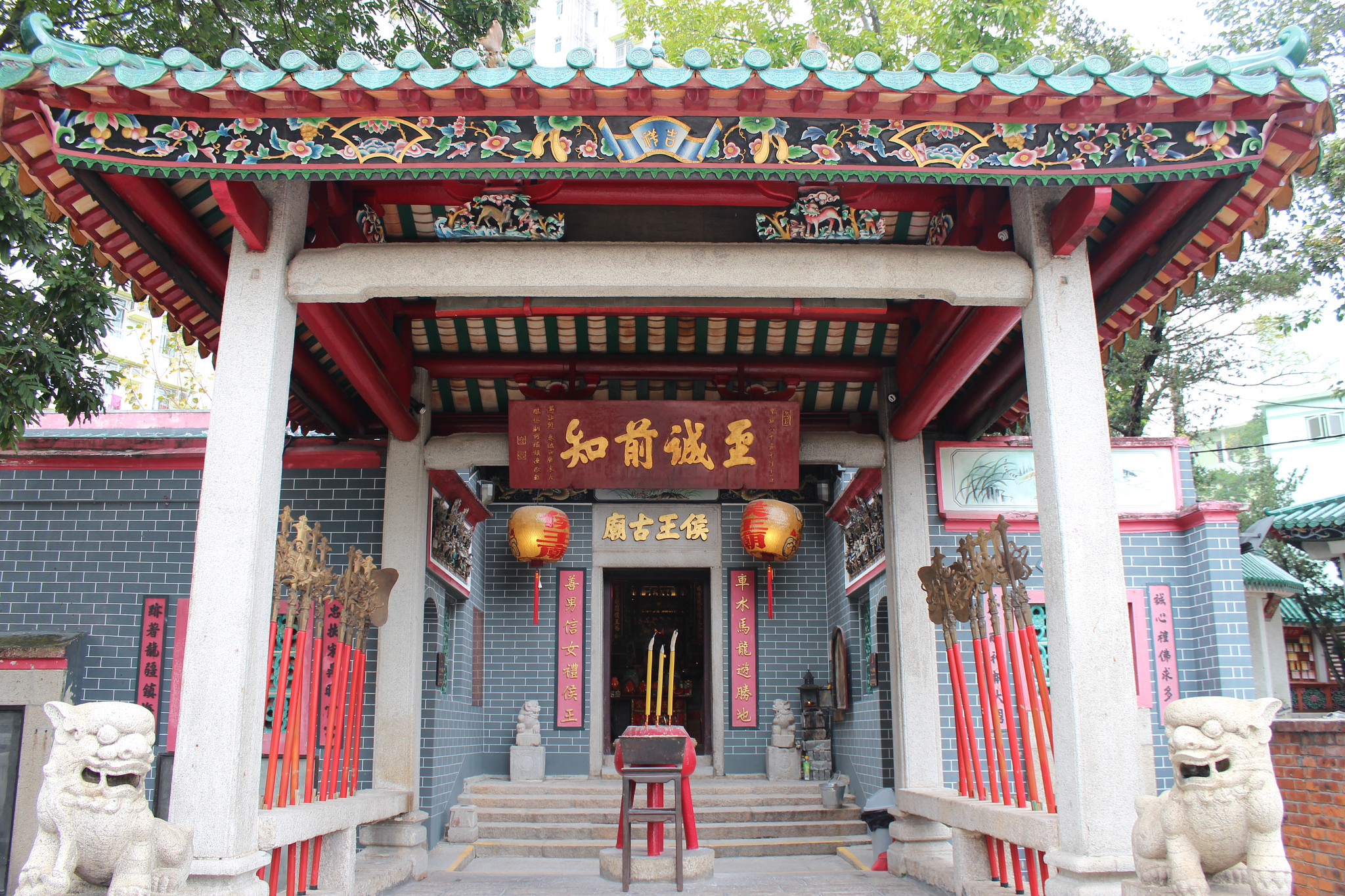 A trip to Kowloon City isn’t quite complete without a Thai meal. For the old-school vibes, the cooked food center’s Amporn Thai Food is as close as you’ll get to the real deal short of hopping on the next fanfare out of here — think bold flavors, big spices, and an extensive menu that offers something for any mood.

It’s all about the protein at this casual-chic all-day diner – choose between a range of classic egg dishes, juicy Australian chicken, or double down and go for both. Chicken ‘n’ Egg also offers a decent menu of salads and sides to add a bit of crunch to your dish.

Kowloon City is home to an almost inordinate number of boulangeries, and Le Fournil is our pick of the bunch. Tuck into one of their delicious (and picture-perfect) pastries or cakes, or take away a loaf of crusty homemade bread.

Kowloon City is almost as well known for its Chinese Muslim food as for its authentic Thai flavors. Hong Kong Muslim Kitchen does exactly as it says on the tin, dishing up hearty, heavy dishes from the north and west of China. Forget the diet for the night and tuck into a signature veal goulash or fiery fried mutton with hot, fluffy bread. 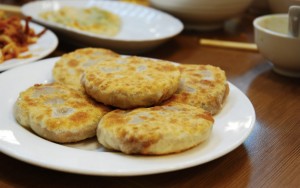 Do it right at Hong Kong Muslim Kitchen.

Many very serious scientific studies have concluding that leaving a craving for fish and chips unsatisfied can have devastating effects on a human being, both physiologically and psychologically. Kowloon City’s Chip In is the place to go when that craving just won’t go away (and it doesn’t, trust us), featuring classic combos as well as an impressively large selection of butties and pies, because when in Rome, right?

This quiet cocktail bar mixes a decent long drink, but we come here for the whisky. The menu includes a more than serviceable selection of Japanese and Scottish blends. The mood is set by the occasional live jazz band, who play from – where else – a balcony above the bar. 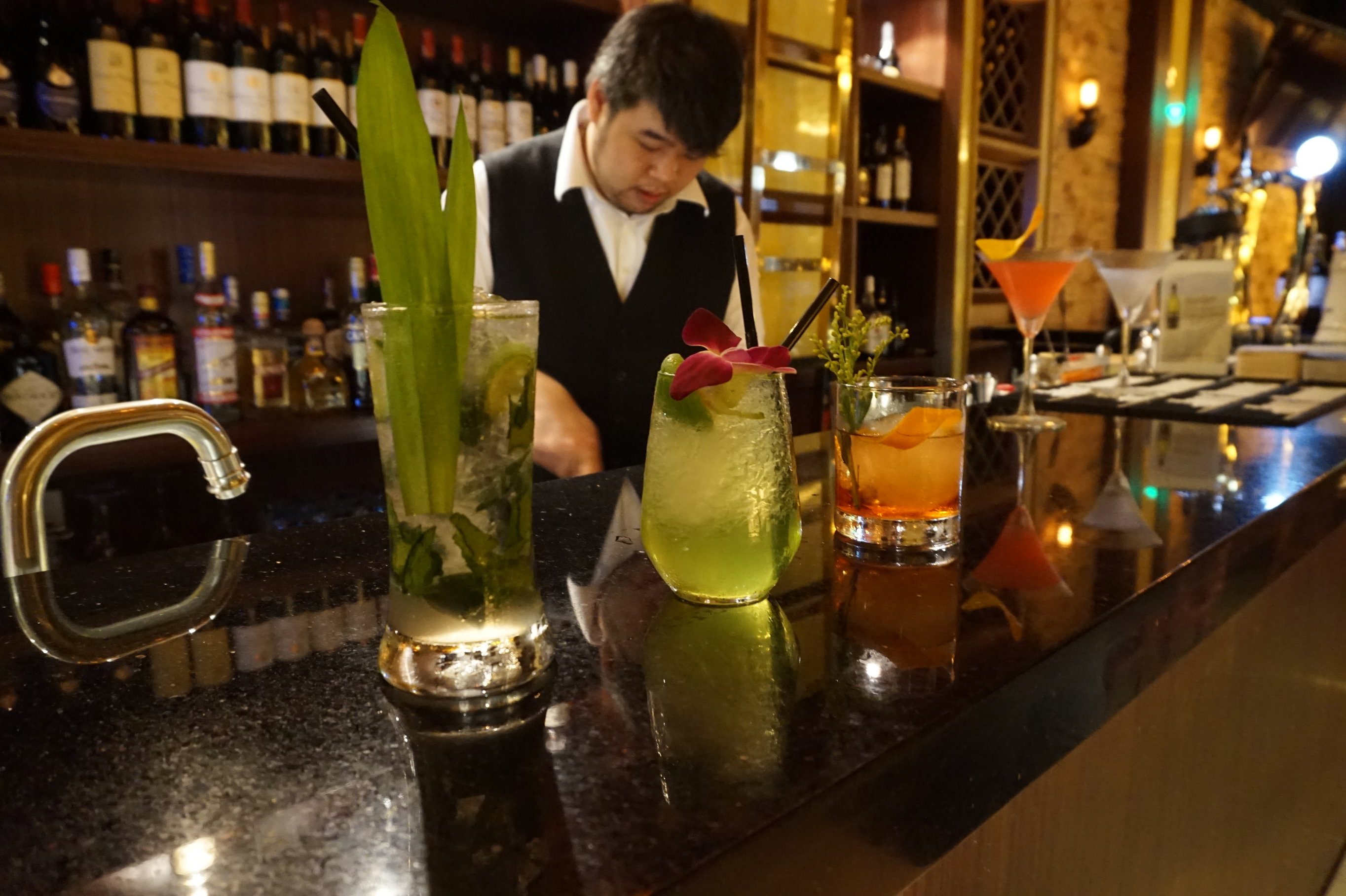 Pop into Balcony for some live jazz and a smooth cocktail.

This American diner comes prepared with Hong Kong craft beers, Japanese frozen beers and watermelon sangria — served in an actual real-life watermelon? Because, sure, why not. Present is probably one of the nicer dive bars we’ve seen, and is a solid choice for a more low-key night out in Kowloon City.

Let’s be honest, every night is a good night for karaoke. The Walled City Pub is a veteran of the legitimately thriving Kowloon City dive bar scene, with friendly staff and regulars who will put you in a musical mood in no time. Things are known to get pretty wild the deeper into the night it gets, but it’s all part of the experience.

Desserts are a big deal in Kowloon City, and the nightly lines outside corner spot Shalom are testament to its quality creations. The menu of ice cream parfait and more traditional soups hits the sweet spot every single time, especially after a spice-heavy dinner. 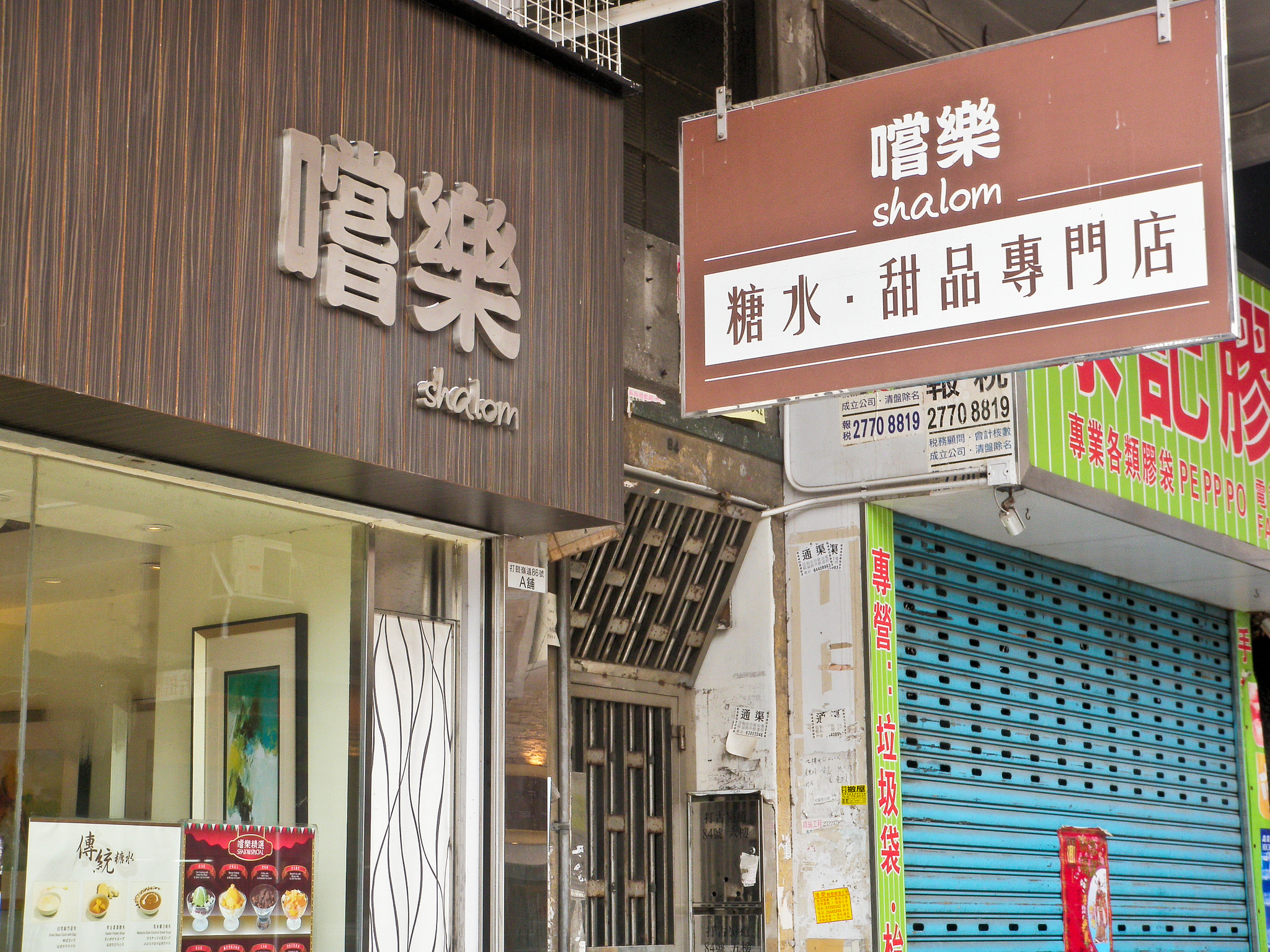 A Chinese dessert place in the middle of Kowloon with a Hebrew name? Anything goes in Kowloon City.

Even those completely averse to fruit will find the lure of of Yuen Hing hard to resist. This brightly lit, 24-hour store specializes in the best of fruit from around the world, with a focus on perfectly shaped Japanese varieties that you’d normally find at high-end supermarkets. 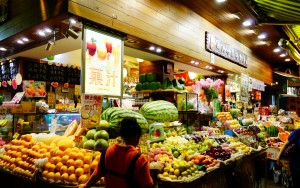 Yuen Hing is the place to go for a fruit fix at any time of the day.

The MTR is expanding, and Kowloon City isn’t being overlooked. While there won’t be a dedicated station, three separate stations will service the surrounding area, making it more accessible than ever.  We’ll have to wait a bit longer yet, though — the Sha Tin to Central link is slated to open in 2020.

An easy stroll south from Kowloon City is Ma Tau Kok, home of one of Hong Kong’s coolest art spaces in the Cattle Depot Artist Village. While you’re there, check out the colorful series of parallel streets opposite, each named for a different auspicious Chinese animal. To the east you’ll find Kai Tak — the former airport was so close in proximity to a residential area that Kowloon City could only have low-rise buildings. Mong Kong and Price Edward aren’t too far, either, a short minibus ride east from the middle of Kowloon City. 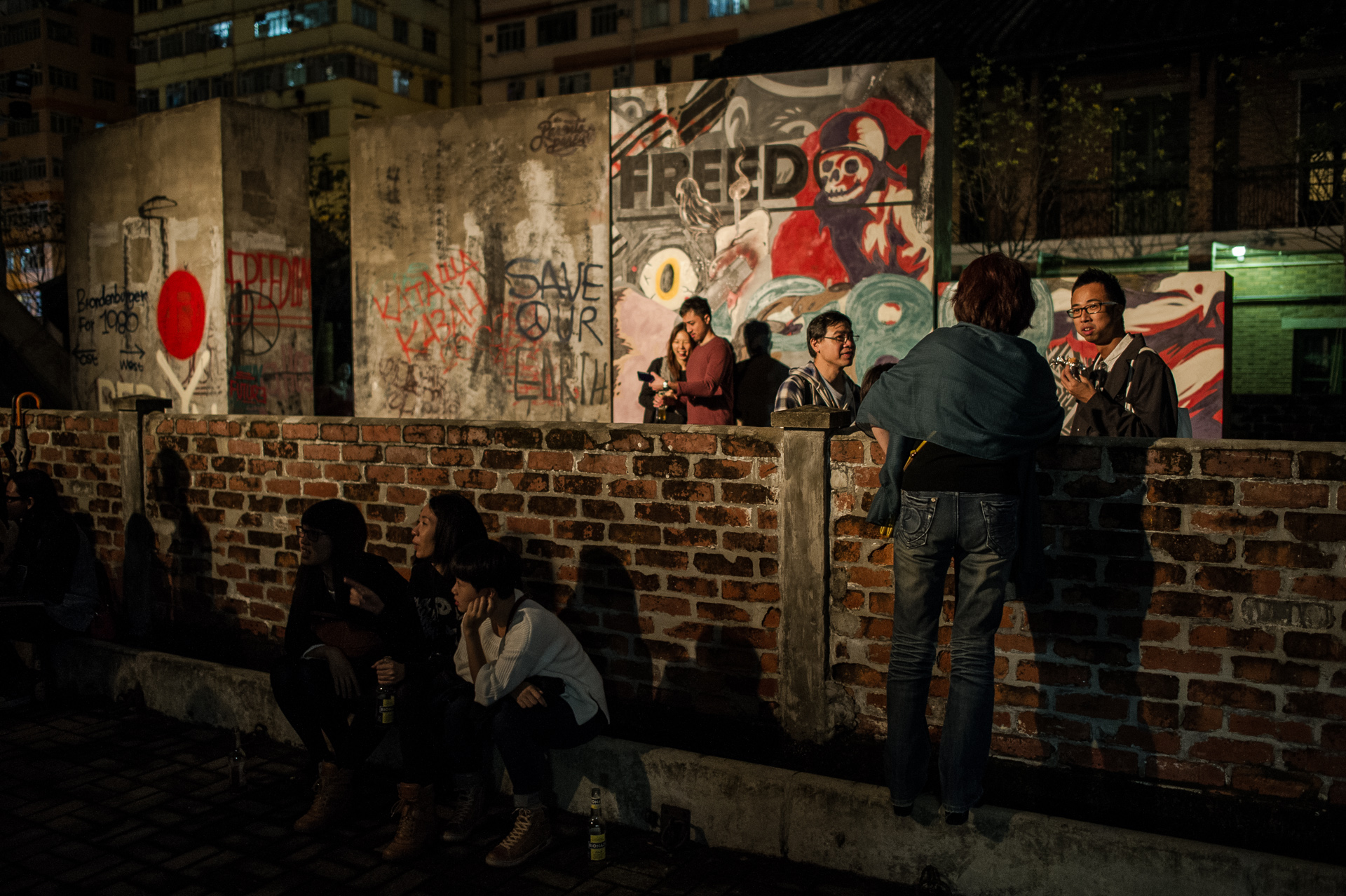 Directions: Jump on the MTR’s green line and alight at Lok Fu — head straight down Junction Road and you’ll hit the back of Kowloon Walled City Park.