Over the past decade, Sai Ying Pun has transformed from a tranquil dried seafood hub on the west side of Hong Kong island, to a cool urban hangout. And the opening of Sai Ying Pun MTR station in 2015 definitely didn’t hurt. Here’s our guide on what to do and where to go in SYP. One of the best restaurants to come of out Sai Ying Pun in 2016 was Rhoda, a restaurant which takes its name from chef Nate Green’s grandmother, whose inspirational home-style cooking had Green perfecting omelets at the age of five. The menu at Rhoda includes the likes of ox heart tart and egg yolk crisps, Lancashire hotpot and ginger biscuit trifle. Guests can grab a seat around the large communal table and watch a little magic before their eyes as the chefs conjure up some incredible tasty home-style meals.

Hong Kong is an international trading hub for all types of dried seafood, a quintessentially Cantonese culinary staple — and the stretch of Des Voeux Road West and nearby streets in Sai Ying Pun are the epicenter of all the action. Luxurious ingredients like dried abalone, sea cucumber, and conpoy (dried scallops) mingle alongside dried whitebait, oysters and squid in the rows and rows of shops that occupy the tram-lined street. With the sheer variety of items for sale, the shops — which function primarily as distributors and suppliers — also cater to everyone from first-time tourists to savvy locals. Too cool to keep this one a secret. Photo: Joseph Lam

Not too far from Sai Ying Pun station, you’ll find Crispy Bistro, a small cafe and bistro with one of the city’s best kept secrets out back. Its secret garden, hand-painted by the staff themselves, makes for the perfect place to enjoy one of the breakfast sets that comes with muffins, scones and croissants with scrambled eggs ($34; add $20 for a long black on the side). In the evenings this place also transforms into a mini bar that opens as late as 2am some days.
32 Second Street, Sai Ying Pun, 2540-9166. Open daily 8am-11pm.

Sitting right beside the MTR exit up on Queen’s Road West, you’ll find Winston’s Coffee, a popular coffee bar that serves up some of the best java in Hong Kong. Winston’s is known for weathering the storm (or should we say typhoon?) and opening its doors through rain, hail or shine. One of the great things about Winston’s is not just the high grade coffee, but the community-like vibe it has created via regular events like 5-a-side football matches, among others. Try popping in one night for a coffee-infused negroni or one of the freshest espresso martinis in the city.
213 Queen’s Road West, Sai Ying Pun, 2559-5078. Open Monday to Sunday, 7am to 11pm. Just up past Sai Ying Pun Exit C where Sai Ying Pun meets Mid-Levels, you’ll find Books & Co, a quaint and cosy bookshop that stocks both secondhand and new books at a reasonable price. Inside, there are a couple of tables and chairs where bookworms can relax with a coffee or tea while spending the afternoon engrossed within their novel in a world of their own. It makes for the perfect spot to escape reality for a little while.
10 Park Road, Sai Ying Pun, 2559-5199. Potato Head is one of four entertainment complexes in Asia, with the flagship located at a beachfront in Bali. The 78,000-square foot space in Hong Kong has been designed from top to bottom by Japanese architect Sou Fujimoto. The entire space encompasses a coffee shop, retail space, a bar, a cafe and an Indonesian restaurant called Kaum, which serves dishes found across Indonesia.
100 Third Street, Sai Ying Pun, 2858-6066.

The Elephas is a cafe, a fitness academy and restaurant all with a healthy theme in mind. The academy offers classes ranging from acro yoga through to a form of Thai sword fighting called krabi krabong. The coffee comes courtesy of a local mob called Blooms Roastery, and the restaurant menu promises to be eco-friendly.
Shop 118 Hong Kong Plaza, 188 Connaught Road West, Sai Ying Pun, 2838-3979. Just a few months after opening in early 2014, Ping Pong Gintoneria has become an icon after the shooting of It’s Already Tomorrow in Hong Kong. “Come on, I’ll show you where the locals go,” said the main character before leading his American counterpart down the stairs and into Sai Ying Pun’s coolest bar. While it might not exactly be where the locals really go, Ping Pong Gintoneria is a gin staple in Hong Kong and has provided both excellent drinks and service since it first opened.
129 Second Street, Sai Ying Pun, 9158-1584.

On the sweeter side of things 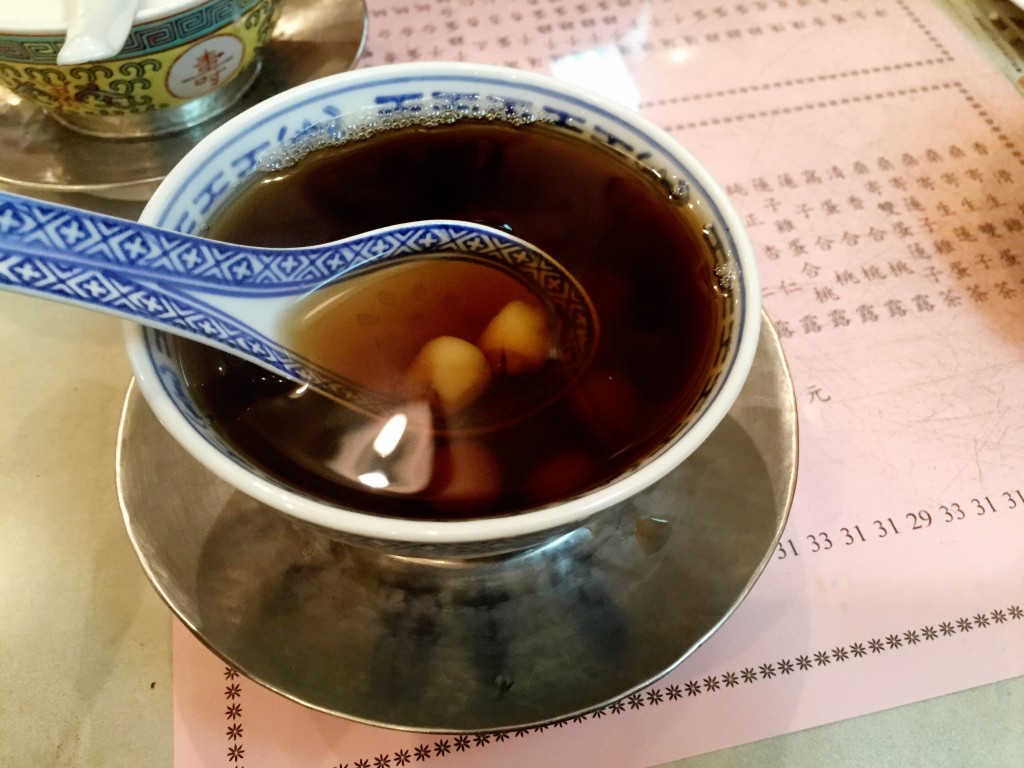 Fancy some traditional Cantonese dessert with the decor to match? Look no further than Yuen Kee, a Cantonese dessert soup connoisseur that was established more than 160 years ago. There sweet almond soup is a staple alongside the mulberry mistletoe tea. The extremely eggy sponge cakes are also worth a try.
32 Centre Street, Sai Ying Pun, 2548-8687. Some claypot rice to get you through the night. Photo: Wikipedia

Known to many as the best claypot rice restaurant in Hong Kong, Kwan Kee is a longstanding claypot specialist with two decades to back it up. Chinese sausage, frog or spare ribs for topping? Why not try them all — there are more than 30 options available.
263 Connaught Road, Sai Ying Pun, 2803-7209.

This almost-hole-in-the-wall is a popular spot for yakitori-style grilled goods and things on sticks. Think humble snacks like fishballs and sausages to fancy items like lamb rack, spare ribs and chicken cartilage. Starting from about $10 per stick, the prices are pretty unbeatable.

To the east we have the busier, more hipster Sheung Wan and to the west there’s Shek Tong Tsui, the quieter ‘hood that borders the University of Hong Kong.

How to Get Here


Tags:  Insider's Guide Neighborhood Guide Sai Ying Pun Sai Ying Pun Guide Things to Do What to Do Where to Go
Copyright Man Mo Media Limited. All rights reserved.
Back to top