“I use a combination of stealth and charm” 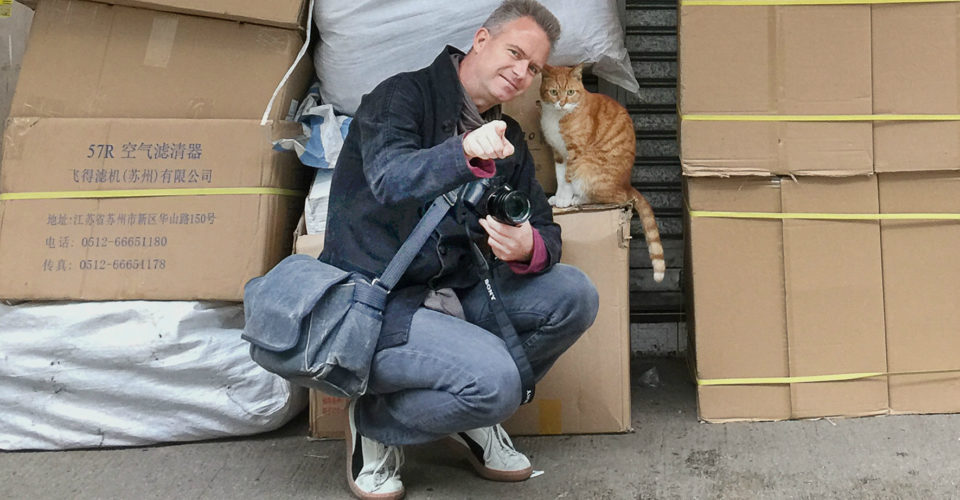 When Dutch photographer Marcel Heijnen moved to the city two years ago, he swiftly became enamored with its various shop cats, leading him to document the fine felines on his Instagram account @chinesewhiskers and eventually publishing a photography book titled “Hong Kong Shop Cats.” That was in 2016. This month, Marcel is launching the second book in the series “Hong Kong Market Cats” as well as an exhibition of the same name at 9 Yu Lok Lane, Sai Ying Pun, opening on November 30 and running until January 14, 2018. He tells The Loop HK all about what a city’s cats have to say about its inhabitants.

Through a cat’s eyes

[I started photographing] cats first. I moved into the Sai Ying Pun neighbourhood two years ago and spotted a cat sitting on the counter in a traditional store. And then one more, and another one. I soon figured out these shop cats provided a purrfect excuse and entry point to capture visually rich stores that will slowly be disappearing from these central areas.

The garage dogs came a bit later. I’m still working on that project, although I’ve released a 2018 Year of the Dog calendar ahead of a potential future photo book. It was nice to feature another animal than a cat. The cats guard the shops against mice and rats, the dogs guard the garages against people.

Putting on the charm

I use a combination of stealth and charm [when photographing the animals]. I try to be unobtrusive, my camera is small, I make sure I don’t get in the way of the flow of business and goods. I smile at the shop owners and gesture that I’m there for their cat — they are usually quite amused by that, and I rarely get a “no.” This symbiotic relationship between human and animals was something I wasn’t aware of, existing right in the midst of urbanization. It’s very different from the usual “pet” function of cats and dogs. I like how organic the city still is, how the seemingly chaotic way of doing business is still so prevalent right next to glass and steel office towers housing banks and offices.

I had this epiphany a few years ago that, coming from Europe, I’m conditioned to think that buildings will outlast humans. This is not at all the case in fast-growing Asian cities. Skylines change overnight, old areas get torn down and redeveloped — all at breakneck speed. I wanted to express the impermanence of Asian cities and started reflecting skylines into weathered walls, using just a clear glass panel and a camera. It results in somewhat dreamlike abstractions that hold the past, present and potential future.

[I learned photography] by doing. My dad was a amateur photographer and we used to have a dark room in our basement. I have a graphic design background and I think that’s where the love for texture and ability to compose comes from. For decades, my photography was merely a hobby — nice travel shots, but nothing unique. In 2008, I took a sabbatical, joined a few creative workshops, and started thinking more in series and finding my voice and niche.

I’m a fan of Edward Burtynsky because of his big picture view of major global issues surrounding our footprint on the earth. In Hong Kong, I really enjoy my good friend Romain Jacquet-Lagrèze’s work, as he’s a master in finding new visual angles to create photographic stories about this city. An early inspiration for me is the Dutch artist Jan Dibbets, as he created hybrid works using both photography and drawing and has a strong architectural and mathematical take.