Room to Read founder on saving the world, one book at a time 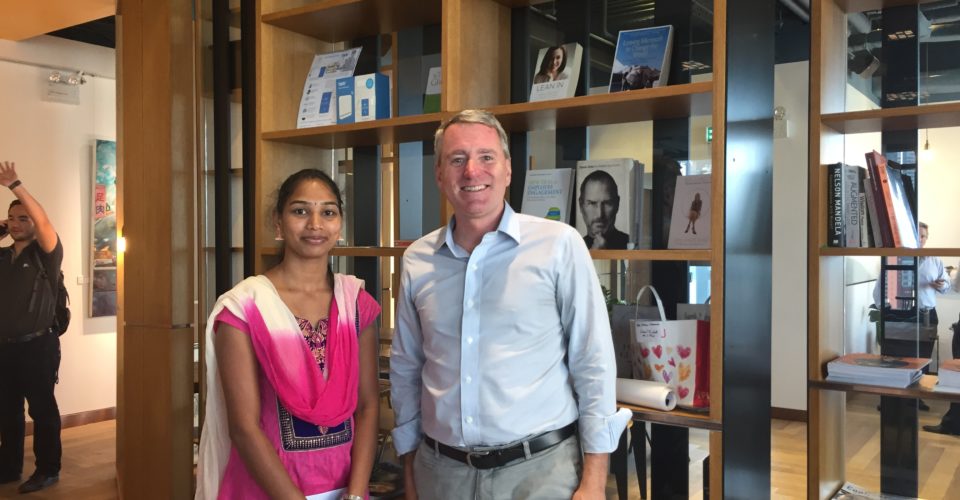 From our Travel Talk series.

Back in March, international non-profit organization Room to Read raised an impressive US $2.8 million at its annual “Active for Education” Hong Kong Gala. The funds will go towards helping 57,000 children worldwide to a proper education.

Founder John Wood, a Microsoft executive-turned-charity maverick, tells The Loop HK about an eye-opening trip to Nepal, and how to achieve a truly equal workforce.

This story has been told many times, but it’s still very inspiring. How did you get the idea to start Room to Read?

I think it was a little bit of luck. Life often comes down to getting a lucky break. In my case, I went to Nepal in 1998 to go trekking at the Annapurna circuit, which is an 18-day trek. On the second day, I got invited by a local headmaster of a school to do a tour. The school itself was pretty dilapidated and run-down. They had a room called the library, and at the back they had a cabinet with a padlock on it. Because they had locked the books up, because they had so few books they considered them to be a precious resource.

I asked the headmaster: Why are you missing something as basic as children’s books? He said that in Nepal, they’re too poor to afford education, but until they get educated we’re always going to remain poor. And that really struck me as a tough situation for kids.

I went back a year later at the headmaster’s request, and we opened the first library, we had 3,000 books, on the back of six rented donkeys. We had to rent donkeys to get these things up the hillside. And it was the happiest day of my life. All the kids had never seen brightly colored children’s books before. They were so excited.

Flash forward to now, where you’re a thousands-strong organization with many branches around the world. How did you get from there to here?

I realized, one library wasn’t going to be enough. Ten libraries wouldn’t be enough. One young woman on scholarship would be important, but why have one young woman when you can have 10,000, 20,000, 50,000?

So my goal was to treat Room to Read similarly to how you build a great company. Let’s build a great NGO, and let’s get the most incredible Sri Lankans, Cambodians, Nepalese staff, hire them, give them the local control to make decisions locally.

We set a very bold vision from the very beginning. We said we were going to reach at least 10 million children by 2020, which I was told was a crazy, hubristic goal for a little-known cash-strapped NGO.

But because of my business background at Microsoft, I believed that bold goals attract bold people. If you set a wimpy goal, you’re gonna attract really wimpy people.

Room to Read’s mission has evolved somewhat from giving kids access to books and an education, to focusing on girl students in particular. How did that happen?

When we started Room to Read, my co-founder Dinesh was opening libraries and we were building schools and what happened was, quite often a lot more boys showed up than girls.

We started asking questions. We were told that families could only afford to educate one child, and that they would educate their oldest son, and not their daughters.

Hong Kong seems to be a big fundraising base for Room to Read.

Hong Kong’s always been very generous to us. Hongkongers are really good at making money, but they’re also very generous at giving that money away to well run causes.

Credit Suisse has been very generous to us, giving us office space over in ICC. Goldman Sachs Hong Kong has been a huge source of support for us. Wells Fargo, UBS, Citibank. We get a lot of support from the financial community, from the hedge fund and private equity community.

We’ve not only hired great people, we’ve also made sure to empower them. Hire, empower, and delegate. We don’t want to be a bunch of white Americans driving around in Land Rovers, telling everyone in Cambodia or Sri Lanka what to do.

A lot of companies have these women’s leadership initiatives. We do something different: we simply have women in leadership. That being said, there’s a lot of good, really strong men, including myself, who also work here.

Ultimately what we’re all about, is we believe that there’s something in the world today called the Lottery of Life. The lottery of life is simple: the two most important factors in how you develop as a child, is where you were born, and to whom you were born.

Do you want to get involved with Room to Read Hong Kong? Send an email to [email protected] to see how you can help.