Sri Kishore (left) is the director of My Indian Boyfriend

Sri Kishore is a Hong Kong-based filmmaker and the director of Hong Kong’s first Indian-style movie “My Indian Boyfriend,” scheduled for release this summer. The film follows the romance of an Indian boy and a Cantonese girl and features seven Bollywood-style dance numbers.

Originally from South India, Sri Kishore moved to Hong Kong in 2008 when he was offered a job teaching dance to Hong Kong youths. He continued to make movies on the side in the Telugu film industry. Prior to  “My Indian Boyfriend”, Kishore has already made three films in India.

In 2013, he was inspired to make a movie in Hong Kong when Kishore realized how curious his dance students were about Indian culture. Married to a Hongkonger himself, Kishore came up with the idea of Bollywood-style romantic comedy between an Indian man and a Hong Kong woman. To create authentic Bollywood dance sequences, Kishore flew a crew from India to film the scenes. “My Indian Boyfriend” was shot during the summer of 2020 in the midst of the Covid-19 pandemic.

5 Things You Should Know About “My Indian Boyfriend”

Kishore: I was flying between India and Hong Kong a lot, and so initially, I just wanted to make an Indian movie in Hong Kong, or a Cantonese movie. My dance students were all from Hong Kong, and they asked me so many things about Indian movies. They loved the songs, the colors, and the massive dance scenes. They wanted to know more about Indian culture.

I started thinking that maybe I can insert these Bollywood-style songs in a Cantonese movie. I can put in more colors, some happy and sad moments, and I can showcase cultural differences between Indian and Hong Kong culture. The idea slowly evolved like that.

I had the basic idea in 2013, and it took another two years to develop the idea. I wrote the story on-and-off from 2015 to 2017. When I shared my idea with other people, everyone responded positively. People started telling me that no one has done this before, and that I’m the first-ever Indian filmmaker in Hong Kong. But actually I wasn’t focusing on doing something that’s never been done. I was just aiming to make another movie. My targets were small. Finish the script within six months. Complete that in another six months. I was setting up my goals one by one.

Kishore: The story is maybe 2% inspired by my own love story. I’m lucky that my wife is Hong Kong Chinese, so I have firsthand experience observing how our families interact. I’ve learned more about Chinese culture from my wife’s family and how they celebrate festivals. I myself understand how an Indian family would behave under similar circumstances.

Culture comes from basic things like clothing, food, the way you eat, the way you sit. I wanted to show some of that. For example, how a middle-class Indian family behaves inside their home. There’s a scene where the Hong Kong girl goes to the Indian boy’s house. It’s a new thing for her and she just wants to learn. I want to introduce Indian culture to Hong Kong audiences, and Hong Kong culture to Indian audiences. 3. It’s a feel-good romantic comedy about two families coming together through love

Kishore: The basic message in the film is that love has no boundaries. Anybody can fall in love with anybody. Love is love in India, love is love in Hong Kong. But how you deal with it, how you work on it will be different across different cultures. Love is not just only two people falling in love, but also two families coming together. It’s not just falling in love with another person and she falls back in love with you. We all have families, so it’s also about how two families come together and the conflict that arises.

I promise you that once you watch the movie, you will laugh. You will cry. You will feel the love. And you will come out of the theater full of joy. 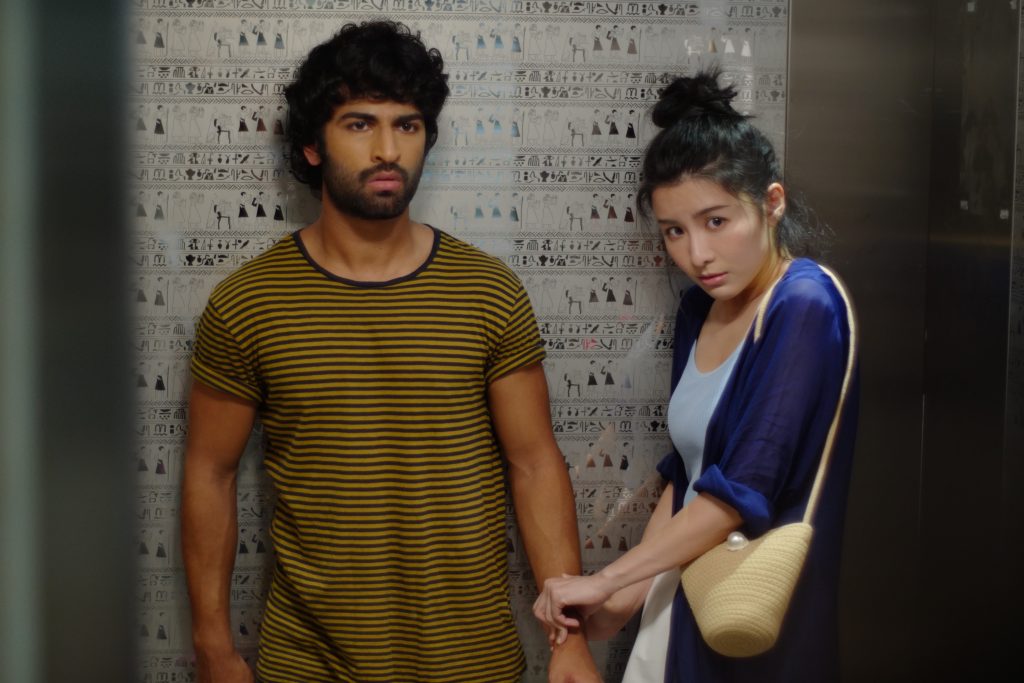 4. It features seven songs numbers, and it is like a party!

Kishore: We have seven songs in total. Among them three songs are in Cantonese. And it’s like a party. The formula is the same as in Bollywood movies. I focus on telling stories through the songs, or else people would get easily bored. The songs move the story forward. So many things are taking place during a song. I want the audience to have a fun time during the songs.

The dance sequences was shot in many iconic Hong Kong locations. I want to showcase Hong Kong especially to India. We shot outside most of the time. We couldn’t fit in all the locations I wanted, but we tried our best.

5. The movie was shot during the third wave of pandemic in Hong Kong

Kishore: Even in normal days, it’s hard to shoot in Hong Kong. Getting permissions, preparing documents, etc. At the same time, we had to deal with Covid-19. Only four people were allowed outside together in a group, and we had to be very careful with controlling the distances. Honestly, we didn’t know what would happen the next day. We had to prepare plans A, B, C for each shooting day. We just focused on one day at a time. Somehow we finished it.

After 6pm, the streets were all empty. It was my Indian crew’s first visit to Hong Kong. They had wanted to properly experience Hong Kong, but we couldn’t eat outside. We got takeaways from work and ate at the hotel.

I came to Hong Kong in 2008. The junction in Causeway Bay in front of Sogo is one of my favorite places. It has always been my dream to shoot there. It really was like a dream-come-true to shoot a song number in Hong Kong. It was hard due to Covid, but somehow we made it. It has been the most memorable experience.

What was the biggest challenge during this whole journey?

Kishore: You need a lot of money making a movie in Hong Kong. It’s not like independent cinema. And we have songs, which require colorful dresses for at least 50 people. I had a hard time finding investors, especially my being Indian. I needed to make people believe in me first, the concept after.

I talked to everybody about the movie. I was talking, talking, talking. It didn’t matter if they would invest. I just wanted to spread the news. I wanted people to know that there was this Indian planning to make a movie called “My Indian Boyfriend”.

It eventually took almost three years of that before I found investors. I’m so grateful to everyone who helped me along the way. I mean, I’m a nobody in Hong Kong. I’m just a normal Indian. But people in the industry were so supportive. They listened to my concerns, met up with me whenever I called, encouraged me to keep going.

“My Indian Boyfriend” is slated for a summer 2021 release. Follow the film’s Facebook page here to receive their latest news!