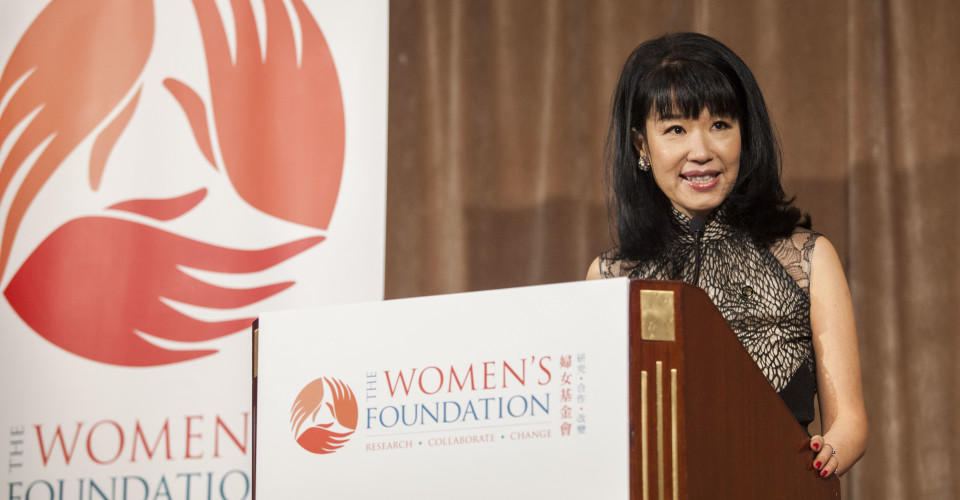 Su-Mei Thompson, CEO of The Women’s Foundation, has been working to improve gender equality in Hong Kong for the past six years. TWF focuses on several key areas, including challenging stereotypes, empowering women in poverty and advancing women leaders.

Su-Mei Thompson has a wealth of experience: She worked in London as a corporate finance lawyer, moved to Hong Kong to work in the TV division of The Walt Disney Company, helmed the Financial Times as the regional managing director, co-led Christie’s Asian operations and also served on the board of Save The Children Hong Kong.

After taking a year off when she had her second daughter, Thompson realized how hard it is for women to go back to work after a career break and overcome workplace biases. She joined The Women’s Foundation as CEO six years ago to help pioneer new programs and support women’s empowerment.

5 things you should know, according to Thompson

1. Asia’s lagging behind in the push for equality

Well, let’s start with how women are doing globally. According to the World Economic Forum’s 2015 Global Gender Gap Report, we are 118 years away from gender equality in terms of labor market opportunity, education, health, and political clout.

Meanwhile, when you talk about Asia and women and business, according to Mercer’s latest When Women Thrive, Businesses Thrive report, Asia is projected to have the lowest representation of women in top executive and professional roles in 2025 versus other parts of the world.

Mercer discovered women make up 35 percent of the average company’s workforce at the professional level and above worldwide. In Asia, that number is 25 percent. If current hiring, promotion and retention rates stay constant, female representation will reach only 28 percent at both the top executive and professional level and above by 2025, lagging behind all the regions of the world.

2. And Hong Kong’s not exactly leading the way…

People assume Hong Kong is a very gender-equal society until you confront them with the data. Not one of the 21 judges in our Court of Final Appeal is a woman. Not a single president or vice-chancellor of a university in Hong Kong is a woman. Nearly 40 percent of the companies listed on the HK Stock Exchange have all-male boards.

One of the major contributors to the problem is Hong Kong’s Employment Ordinance, which provides for just 10 weeks of statutory maternity leave — well behind the 14-week minimum proposed by the International Labour Organization based on considerations of maternal health and infant wellbeing.

China is at 14 weeks, Singapore is at 16 weeks, so Hong Kong should really step up to the plate. Hong Kong also provides only three days of statutory paternity leave. The big disparity between the length of maternity and paternity leave continues to straitjacket men and women into traditional gendered roles.

3. Involving men is half the equation

The business case aside, nowhere is the fact that gender equality is good for men clearer than in our personal lives. Research shows that the greater men’s share of housework and childcare, the happier the marriage — and children are happier, healthier and do better in school.

They are less likely to be diagnosed with attention deficit hyperactivity disorder (ADHD), to be put on prescription medication, and to be referred for behavioral problems. They have lower rates of absenteeism and higher school achievement scores. Because fewer men do housework than women, when they share the work, it has more impact on children.

According to a survey by the Women’s Commission in Hong Kong, 30.7 percent of women cited caring for family members as the primary reason they dropped out of the workforce.

4. Sexual harassment in Hong Kong is more common than you might think

In Hong Kong, a survey by the Hong Kong Women’s Coalition on Equal Opportunities in 2013 found that one in two respondents had experienced sexual harassment; one in four, domestic violence; and one in seven, sexual abuse.

Embarrassment, fear of reprisals, a belief that disclosure is pointless, and the belief that women must endure violence because it is a normal part of life, were among the reasons the authors found for women’s decision not to report.

It is encouraging to see that over the last five to 10 years, many stakeholders have taken steps to advance gender equality in Hong Kong. The government has mandated that all government departments have to apply a gender mainstreaming checklist when it comes to policymaking, and it also introduced statutory paternity leave in 2015.

Businesses have ramped up their talent and diversity programs to attract, retain and promote more women and a number of organizations have set targets for women in management positions.

Many challenges remain for women: We’re still seeing wage gap disparities, a startling lack of women in decision-making positions, and continued workplace gender bias and discrimination, to name a few.

With the number of male feminists who are speaking up and signing up to drive greater gender equality, I think Mars and Venus are moving closer together!