The Juicest, Tastiest Dumplings You Can Find in Hong Kong Photo courtesy of Still and Always

With the cold creeping its way towards us, we’re craving anything with a bowl of warm, soothing soup — the perfect time for dumplings (水餃)! Not to be confused with wonton, dumplings is more elongated in shape, has more variety in terms of fillings, and the dough appears whiter in color. The dish originates from Northern China and often uses a mix of meat and vegetable filling. They can be enjoyed in a broth, pan-fried, or even deep-fried, and dipped in a soy sauce and vinegar mix.

Just outside of Sheung Wan’s MTR on Hillier Street, you’ll find this family-run dumplings restaurant with a bright red interior. The dumplings here are known for being freshly-made, affordable and big, almost half the size of a person’s palm. The menu boasts more than ten varieties of dumplings, from pork and seaweed, pork and boy choy to pure shrimp and seafood dumplings. Dumplings come in a bowl of eight, or five with Shanghai-style noodles. Another thing people come for is the homemade soup. The fish maw, yam and pork bone soup (花膠淮山豬骨湯) is creamy and nutritious, while the Chungking sour spicy soup (重慶酸辣湯) is great if you prefer a sharper and heavier flavor profile. 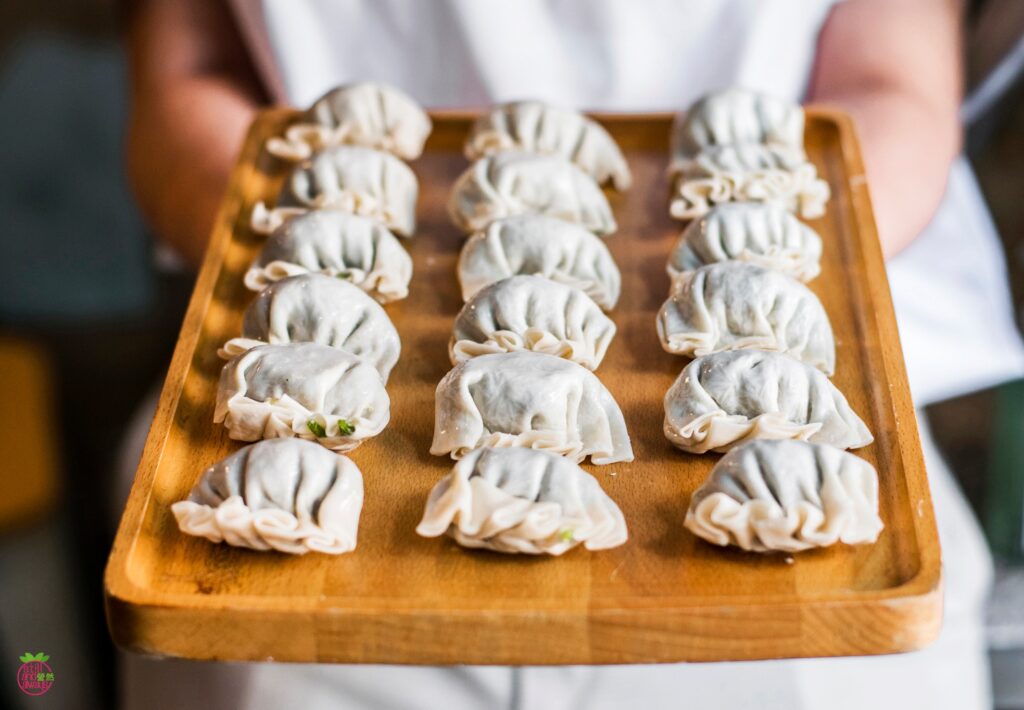 Photo courtesy of Still and Always

Within four minutes walking distance from Fortress Hill MTR station is this small-scale Hong Kong restaurant that focuses on light and healthy dishes. The simple menu includes only five flavors of dumplings, two soups, three chicken rices and three appetizers. The dumplings are beloved for its thinly-rolled dough and juicy fillings. You’ve got the regular fillings like pork and leek, cabbage or coriander, but the most popular fillings here are cordyceps and pork, and mushroom, corn and pork. Compared to other dumplings restaurant, Still and Always also less fatty and more lean pork — great for those that prefer a lighter texture. Run by a family of four, the small restaurant sells handmade dumplings and marinated dishes by Papa and Mama Chan, as well as Japanese-style sweet treats by their daughter-in-law. Every morning, Papa and Mama Chan go to the wet market every morning to shop ingredients, and then prepare a slow-cooked soup to go with the dumplings. The pork and coriander dumplings use a generous portion of fillings and are among the customer favorites here. As for how Japanese desserts end up being part of the menu, it all began with their desserts-loving Japanese daughter-in-law. After she tried selling her homemade treats at the shop, they became a hit and are now beloved items on the menu. The rich and creamy coconut, chicken and pork bone broth that comes with their dumplings. (Photo courtesy of Fung Shun Dumpling)

One thing you may not know about Prince Edward is that it’s a dumplings cluster! The area is home to more than ten dumplings restaurants, and one of the best reviewed of them all is Fung Shun Dumpling Shop. Though relatively new to the area, the restaurant is serious about their dumplings. They are wrapped fresh to order, and uses fresh ingredients so there are no unnecessary seasoning. There are 11 varieties of dumplings to choose from, including both traditional and modern fillings. The coconut, chicken and pork bone broth that comes with the dumplings are slow-cooked for over four hours daily, resulting in a thick, creamy and delightful soup.

The homey restaurant is famous for its handmade authentic Northern Chinese dumplings, especially the harder-to-find lamb dumplings, which are made with special spices and more warming for the cold weather. Other than dumplings, the restaurant also serves many Northern Chinese dishes such as sour and spicy potato stir-fry and Shandong-style noodles with lamb. Another thing worth noting is that it’s got a whole vegetarian menu consisting of dumplings and noodles to cold and hot dishes. Originating from mainland China, Tommie Dumplings makes their signature dumplings with vegetables from their own farms. All the soup dumplings come in a thick chicken broth, and in many flavors such as pork and leek, pork and cabbage as well as chicken and corn. Looking at the menu, the restaurant feels more like a cha chaan teng that also offers dumplings — you can also find many classic dishes like chicken rice, beef brisket noodles, Singaporean-style fried vermicelli here.