Get Off-the-Beaten Path in Beijing Next time you’re in Beijing, get far, far off the tourist trail — or risk rubbing elbows with thousands of people in line for the Forbidden City or the Mutianyu Great Wall. We’ve got a few ideas to get you started.

The brainchild of two North Americans craving proper beer, Jing-A Brewing Co  started unofficially in 2012. The duo homebrewed an American IPA, their friends loved it, and it took off from there. Soon after came a gorgeous courtyard flagship where you’ll find about a dozen beers on tap, plus bar snacks to boot — don’t miss the sweet potato French fries. Taste ’em all at Jing-A Brewing

Another local favorite is Great Leap Brewing, which has several pubs dotted around the city. The bars feature a rotating list of weekly brews, plus guest beers too. The bar in Doujiao Hutong has a cool courtyard feel, but the Dongcheng location serves up amazing burgers to match. 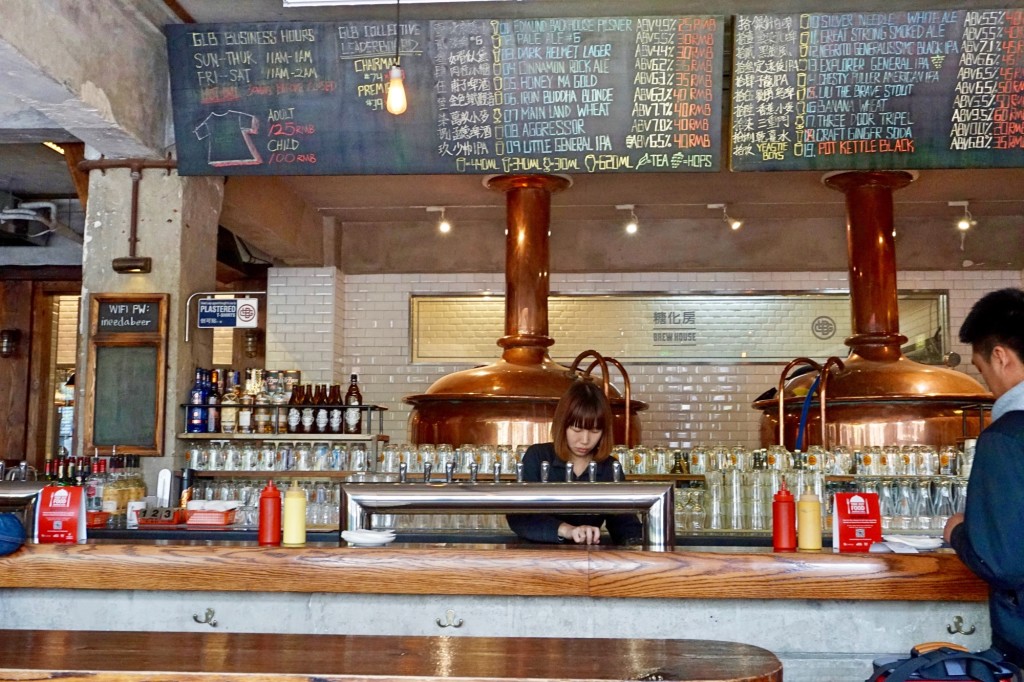 Continue your pub crawl with a few from Arrow Factory Brewing — the brewery’s beers can be found in bars all over town, including its own taphouse in the charming Jian Chang Hutong.

2. Top up on quality coffee

You’d be pleasantly surprised at the influx of quality coffee in Beijing, with boutique spots taking cafe culture to the next level. A relatively new addition in a quaint alleyway, FIX (20 Banchang Hutong) takes caffeine seriously with specially imported beans from Australia. Founder Sami Wong, a clinical psychologist, also provides counseling and therapy in a cozy office behind the cafe — giving the name “Fix” a layered meaning. 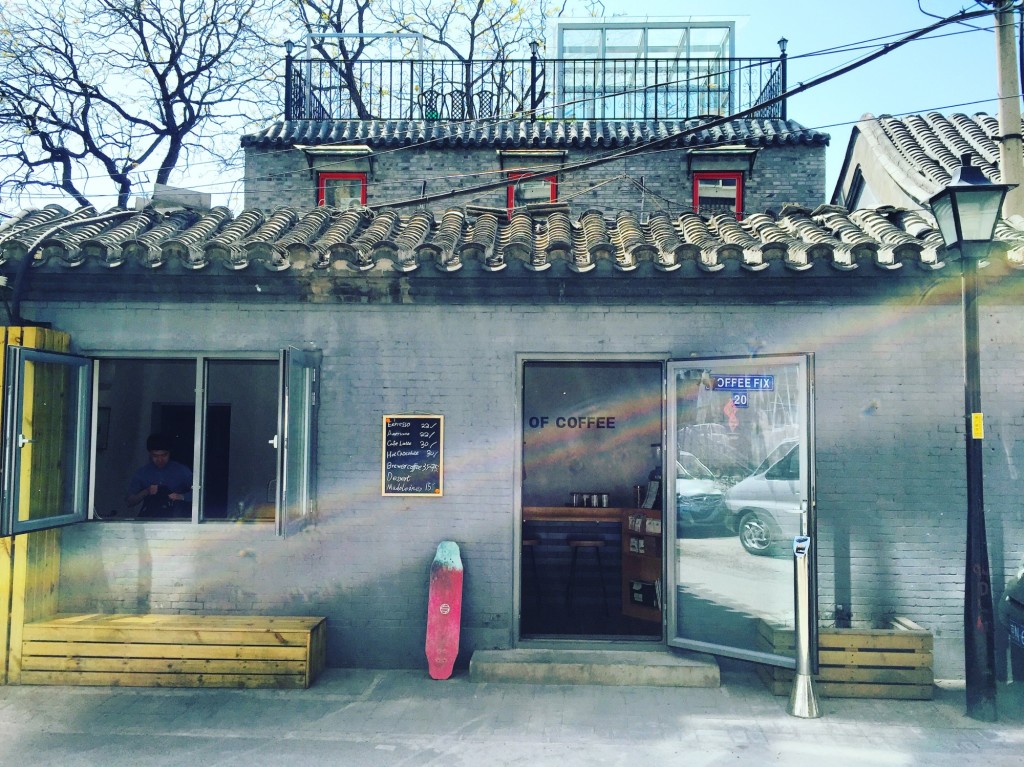 It’s nothing but good vibes at A.Omen (196 Jiu Gulou Dajie), a tiny cafe that’s not too bar from the Drum and Bell Towers. Bar and counter seats offer up a choice, and the smell of brewing beans fills the air. Whether you’re after drip coffee or something sweet and milky, you can’t go wrong here.

Okay, we admit, it may be kind of a touristy thing to do — but it’d be sacrilegious to suggest a trip to Beijing without a plate full of Peking duck. Luckily, a few restaurants have stellar reputations for this star dish — the most famous is Da Dong Roast Duck (5/F, Jinbaohui Shopping Center, 88 Jinbao Jie, Dongcheng District), which has won award after award over the years.

In the basement of the Opposite House hotel, find Jing Yaa Tang — a beautifully designer, modern space that’s fitting for fashionistas and style-hungry travelers. The Peking duck here is top-notch, carved beautifully table side and served with paper-thin wraps and personal condiments. There’s also the luxurious Duck de Chine, an upscale option in the 1949 The Hidden City (Gong Ti Road North, Chao Yang District), which was originally a factory run by the Beijing Machinery and Electric Institute. In 2008, a restaurant group renovated the factory grounds into an industrial-chic community of restaurants and bars. After your meal, check out the Bollinger Champagne bar or one of the beer gardens next door.

4. Explore the Great Wall in secret

If heading to the Great Wall is on your must-do list, consider taking an alternative approach. Two areas of the wall that remain untrampled are the Jiankou and Simatai sections.

Unlike Mutianyu and Badaling, which are renovated and teeming with tourists, these two challenging hikes remain in their crumbling Ming Dynasty-era original states, curving and twisting wildly across the mountainsides.

To hike Jiankou, you’ll start in a little village called Xizhazi Village, and head to Mutianyu in about four hours. For those starting in West Simatai, expect about a five-hour trek across 400-year-old walls and rugged natural scenery to the Jinshanling Great Wall. A bit of a rough and tumble climb on the Jiakour Great Wall. Photo: Kate Springer

If you really want to get off the beaten track, consider sleeping overnight in a Watch Tower. One tour company, Great Wall Adventure Club, offers multi-day experiences where you will explore the less-trodden parts, dine in a local farmer’s house, and camp on the wall itself.

Not looking for something so rustic? Another cool option nearby is Brickyard — a boutique retreat overlooking the Great Wall, which was transformed from an old, coal-burning tile factory. The owner and architect Jim Spears, who opened the place with his wife Liang Tang, has won several awards for heritage-preservation, sustainable practices, community-centric model, and small ecological footprint. Brickyard looks out of the Great Wall. Photo: Kate Springer

Back in the big city, a slew of stylish watering holes have been taking drinks to the next level. Hot spots such as Janes & Hooch dominate the cocktail scene with bourbon-based drinks and classic cocktails in a speakeasy-like setting inspired by 1930s New York.

Nearby Night & Nice (4 Sanlitun Dong San Jie, Chaoyang District) in Sanlitun has been turning heads with its leather-clad, speakeasy style. Co-owner Vincent Guo doubles as the bartender some nights, so quiz him for recommendations if you can’t make up your mind.

Over in a quiet hutong, Mao Mao Chong (12 Banchang Hutong, look for ‘MMC’ on the door) is more of a veteran, with over five years under its belt. It might be the casual atmosphere, or maybe it’s the great pizza and creative cocktails — in any case, MMC’s furthering the cocktail mission with locally sourced ingredients and Chinese-inspired flavors.

A few of the hottest tables in town are actually not Chinese at all — but rather, Scandinavian, Middle Eastern and European. Take The Georg by Georg Jensen, a beautifully renovated space from the Danish silver brand — it sits on the Jade River, serving up Scandinavian-influenced cuisine in a spectacular glass-atrium setting.

Over at luxurious Temple Restaurant Beijing, aka TRB, you’ll find contemporary European cuisine in Aussie-designed interiors with sky-high ceilings. Originally a 600-year-old temple complex, TRB has since renovated the grounds to preserve the original structure and fixtures, while giving it a new lease on life with sexy set menus and a killer wine list. For a more casual taste of TRB, check out TRB Bites near the Forbidden City and dig into creative cuisine at more manageable price points. Another hidden gem is Toast at the lovely Orchid Hotel. The all-day diner has a lovely hutong courtyard setting, as well as appetizing brunch and dinner menus. Look for sharing plates of Middle Eastern flavors, including couscous and merguez, beef and lamb kofte, and roast duck salad.

Though a little out of the way in Dashanzi, 798 Art District offers a look at Beijing’s burgeoning artistic talents and a few of the city’s edgiest exhibitions from the likes of Ai Weiwei. It’s essentially made up of defunct Bauhaus-style electronics factories, which produced a mix of gadgets for consumers and military machinery until the 80s. Since 1995, when Beijing’s Central Academy of Fine Arts moved in, independent artists and designers have slowly converted the factories into studios, artist workshops, cultural organizations, galleries, restaurants, and bars.