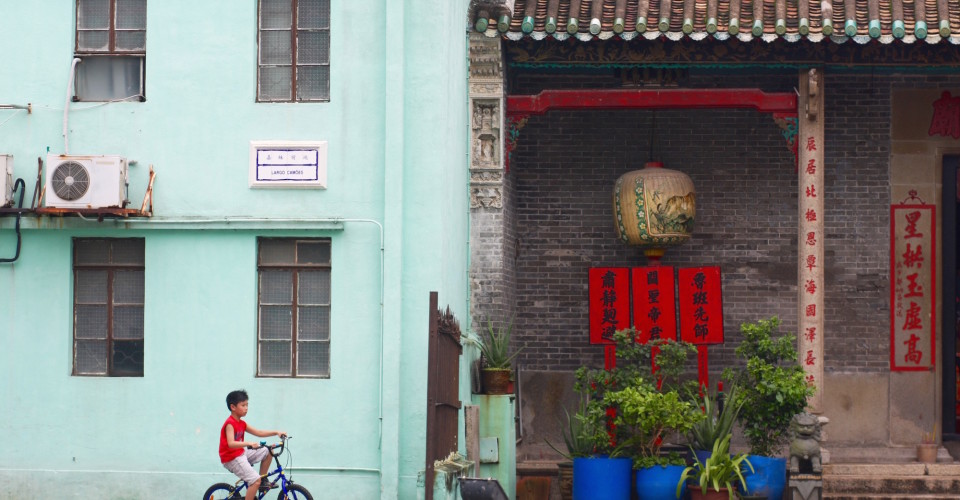 Hong Kong’s sister SAR has come a long way since its days as a Portuguese trading hub. It’s all glitz, glamor and gaming across the harbor — the casinos in Macau are now raking in six times as much as Las Vegas. Not hitting the tables? Head to these cultural and colonial spots instead.

From the ruins of 17th-century St Paul’s Cathedral — which burned down in 1835 — to the pretty yellow facade and neo-classical architecture of St. Lawrence’s Church, central Macau is home to some of the region’s most photogenic churches. Many of them were built by Jesuits in the 16th and 17th centuries, who were said to sit on the broad church steps and wait for their family members to return from sea voyages.
St Paul’s Cathedral: Calçada de S.Paulo; St. Lawrence’s Church: Rua de São Paulo. 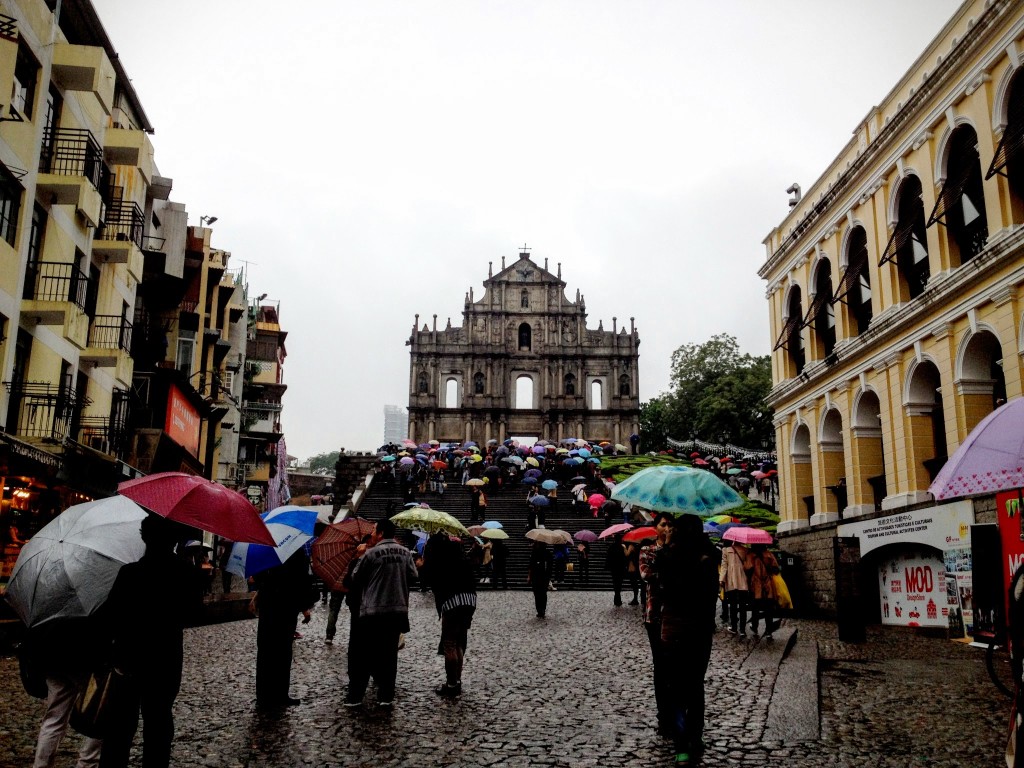 St Pauls in the rain

It’s hard to find a quiet corner in buzzing Macau these days. Make the trip down to Coloane, though, and you can catch a glimpse of the old Portuguese lifestyle — think cobblestone streets, little local shops, gorgeous churches, open-air markets and lots of restaurants. One of the most memorable attractions is the butter-yellow church of St. Francis Xavier that was built in 1928. There are a couple of beaches — Cheoc Van and Hac Sa — but neither are going to blow your mind.
Rua Da Tassara, Coloane Town Square, Coloane.

Next to the water just a few minutes’ walk from Taipa village, you’ll find the Taipa Houses Museum — a row of five carefully restored sea-foam green Macanese houses facing the water. The colonial-style homes once lodged upper-class families and civil servants and were later restored in the 1990s. You can wander in and out of the homes, some of which house period furniture or costumes and artifacts.
Avenida da Praia, Taipa, (+853) 2882-7103.

For some of the best views of the city as well as a hit of heritage, take the tiny cablecar up to the Guia Fortress near the center of the city. Built between 1622 and 1638, the fortress is home to a chapel and the first modern lighthouse to be built in Asia in 1865 — a throwback to Macau’s maritime history.
Enter via Estrada do Engenheiro Trigo. 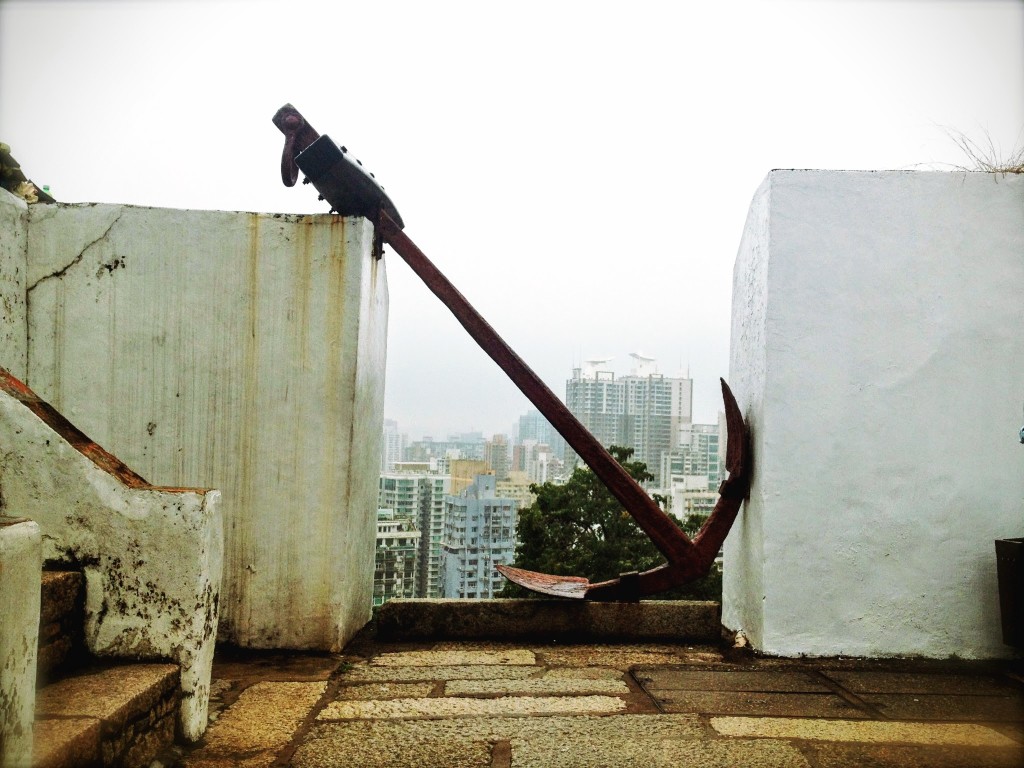 A Macau landmark long before the place was colonized, the A-Ma Temple winds its way up a steep hill on Macau island’s western shores. Navigating the many pavilions, archways and complexes isn’t an easy task, but the uphill hike will give you a glimpse into Confucian, Taoist and Buddhist beliefs.
St. Lawrence’s Parish, (+853) 2836-6866.

Macau takes its superlatives seriously, so you might not be surprised that the territory boasts the world’s highest commercial bungee jump. AJ Hackett’s Macau tower stretches 764-feet high and even offers evening jumps should you feel extra daring. Not one for free-falls? The Macau Tower has a few more adrenaline-packed options, like the Skywalk and Tower Climb.
Largo da Torre de Macau, (+853) 2893-3339.

Newish-to-town Studio City Macau has pulled out all the stops with a theatric setting, over-the-top design and record-breaking Ferris wheel. The hotel-cum-entertainment complex’s Golden Reel is the world’s first Figure-8 Ferris Wheel, built directly into the building’s imposing facade about 130 meters in the air.
Tickets from $100.  Estrada Flor de Lotus, (+853) 8865-8888.

A trip to Macau is not complete without a warm, oozy egg tart from Lord Stow’s. These days there are several more convenient outposts across the territory (including a spot in The Venetian), but head to the original down in Coloane for a special treat. The little bakery is constantly churning these bad boys out, so you can almost always get your paws on a fresh one.
Rua do Tassara, Coloane Village, (+853) 2888 2534. 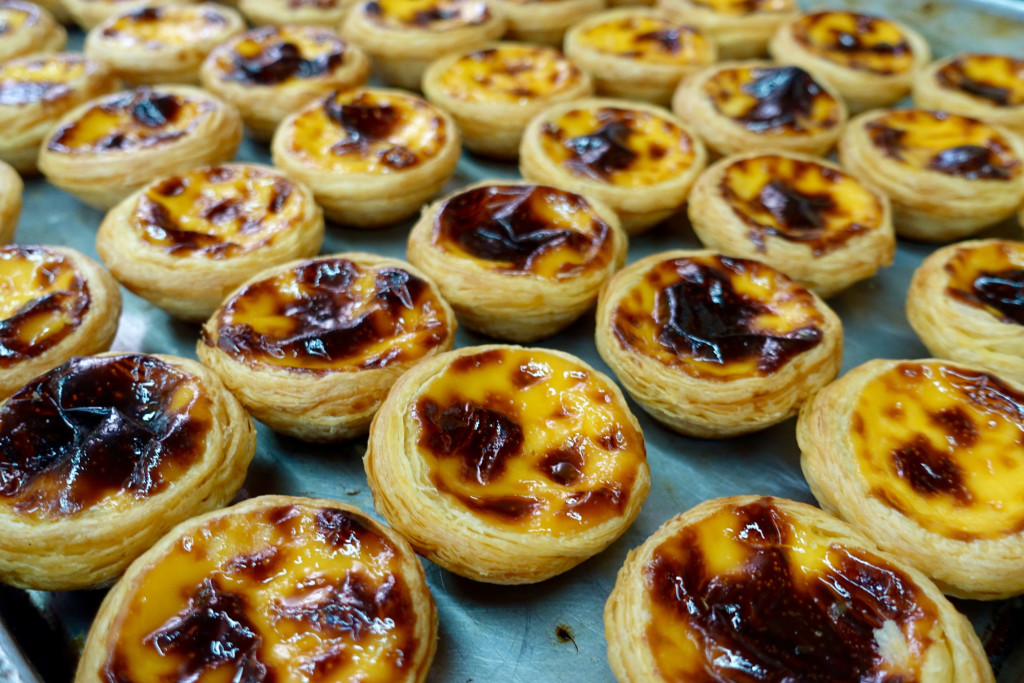 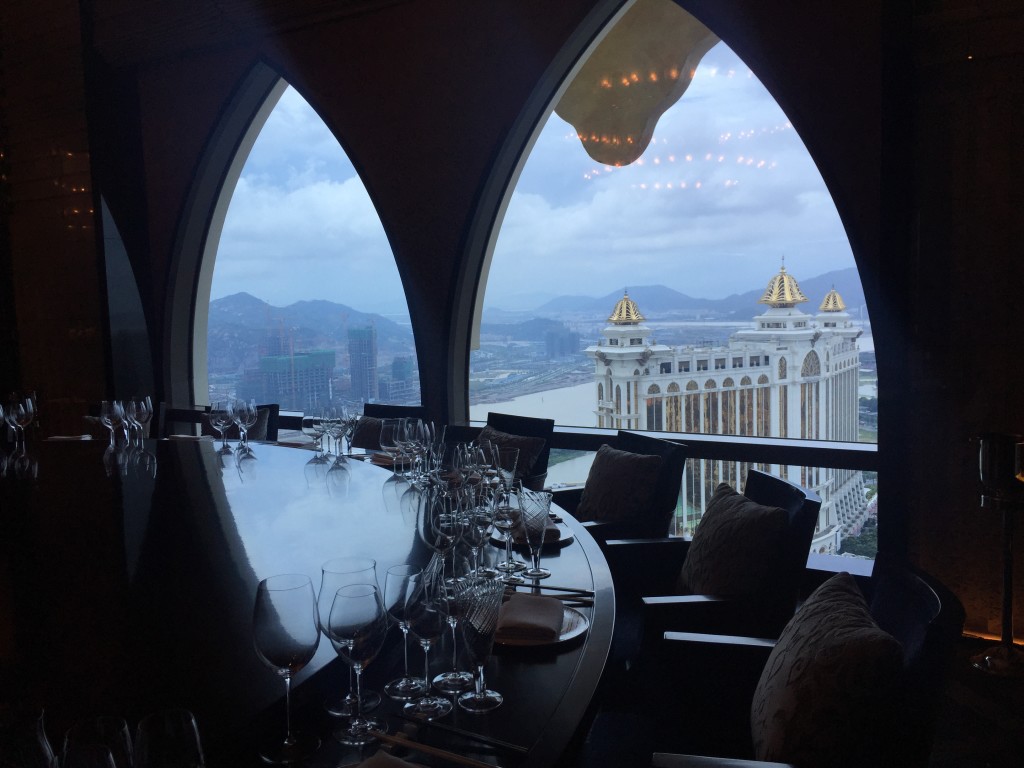 Dine before you die at Lai Heen

For family-style Macanese food it’s hard to beat A Petisqueria. The low-key eatery comes complete with checkered tablecloths, homemade chorizo and inexpensive jugs of house sangria. Tuck into all your favorite staples: clams and pork, garlic prawns African chicken and much, much more. It’s best to have a reservation as this place is constantly packed.
15 Rua de São Joao, Taipa Village, (+853) 2882-5354.

Tucked away in a colonial courtyard in the heart of Macau, Restaurante Albergue 1601 takes up two floors in an old Portuguese home. A set of creaky stairs lead diners up to the main dining area, unless it’s a nice day outside in which case it’d be shame not to take advantage of the leafy outdoor deck. The cuisine doesn’t includes Macanese staples such as deep-fried salted cod balls, stuffed squid and African chicken alongside a long Portuguese wine list. Albergue 1601 is not the kind of place you want to rush through, so settle in and enjoy.
8 Calçada da Igreja de S. Lazaro, (+853) 2836-1601.

Opened since 1989, O Santos has been a stalwart favorite in Taipa thanks to its friendly owner and old-fashioned, homey atmosphere. Don’t expect much more than a few checkered table clothes and a photo menu that looks like it hasn’t been updated since the opening. Despite the humble interiors, the food is excellent, particularly the octopus salad, duck rice, chorizo and grilled seafood. Ridiculously affordable house wines and sangria may not cost a pretty penny but easy does it or prepare to wake up to a malicious hangover.
20 Rua do Cunha, Taipa, (+853) 2882-5594.

Okay, it might be a little musty, but the quiet location down south in Coloane is pretty hard to beat. Pousada de Coloane has all kinds of pretty Portuguese touches, like white and blue tiles, four-post antique beds and terraces overlooking the beach. It’s not a luxury outing, but it’s one of the most pleasant ways to do Macau.
Estrada de Cheoc Van, Coloane, (+853) 2888-2143. 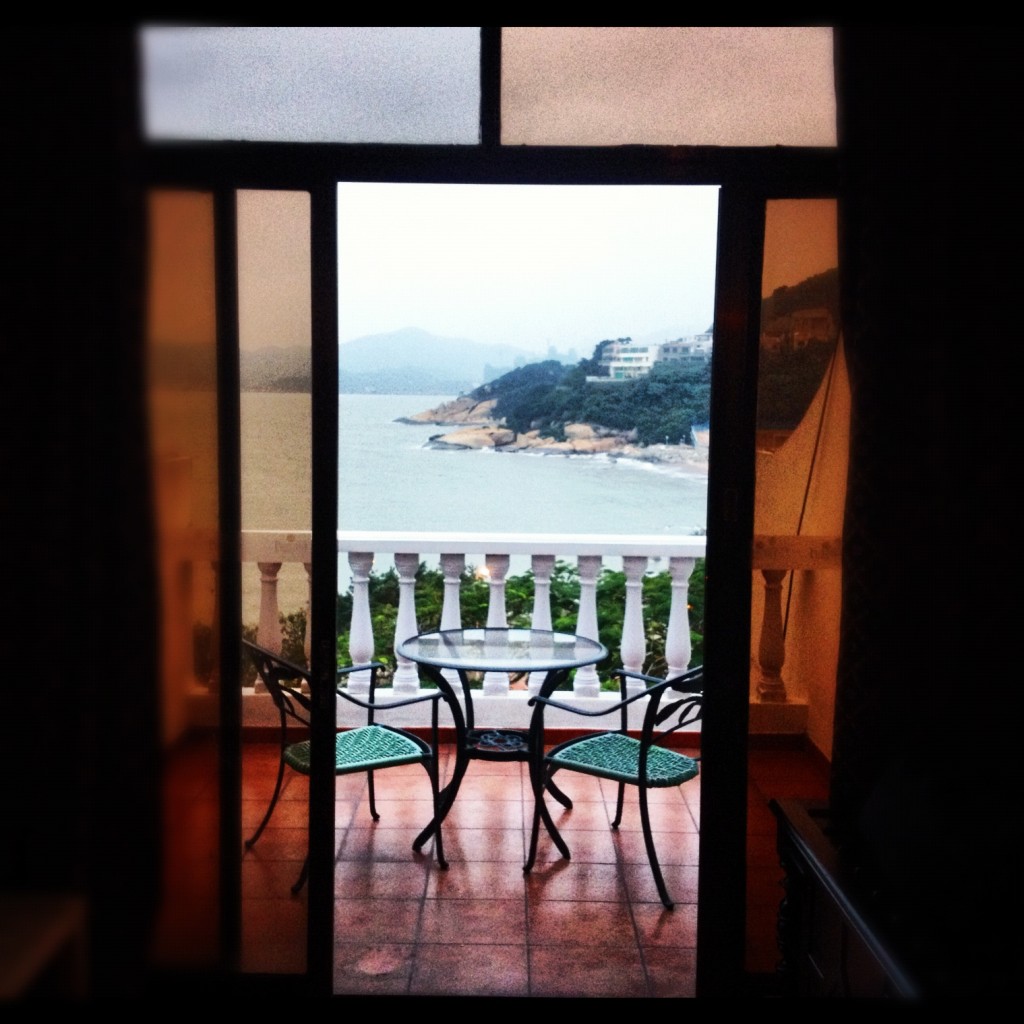 If glitz and glam are more your thing, then check into the luxurious Ritz-Carlton in the new wing of the Galaxy Macau. It’s in the middle of all the action, a close walk from the historical sites and manages to be one of the most pleasant casino hotels. The lounges and bars here are clean and classy, with white marble all around and top-notch service. Quality cuisine too is of utmost importance, with several celebrated restaurants under one roof including the Parisian brasserie-inspired Ritz-Carlton Cafe, a new branch of 8 1/2 Otte e Mezzo Bombana and Lai Heen.
Galaxy Macau, Nossa Senhora da Esperança, Estrada da Baia de Nossa Senhora da Esperanca, Taipa (+853) 8886-6868. 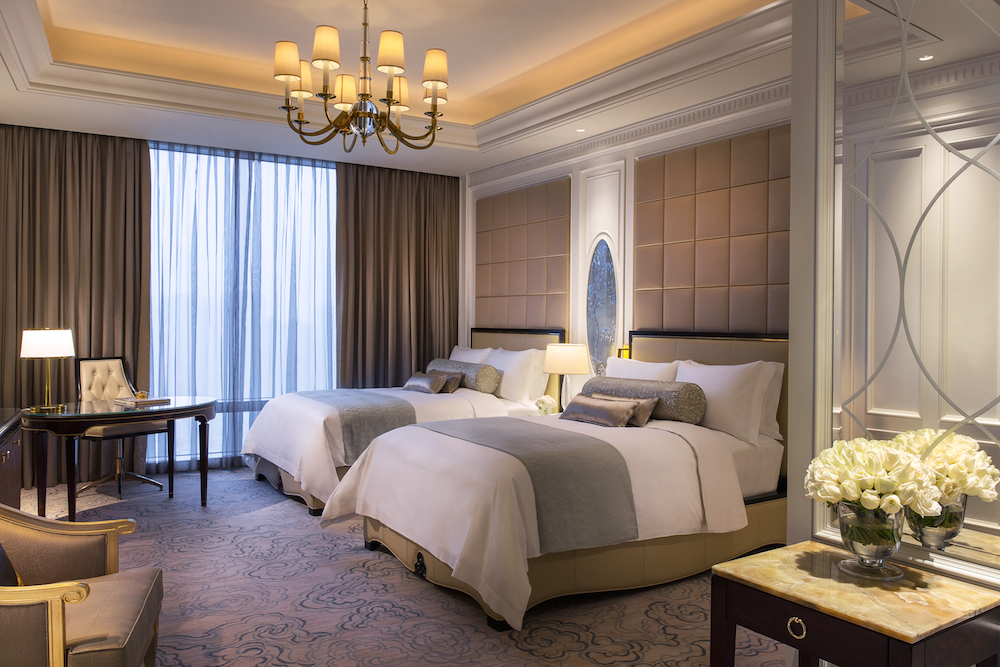 Get a room at The Ritz-Carlton Macau

Ferries to Macau take about an hour and leave pretty much all the time. The two main companies are TurboJet, which goes to the main Macau ferry terminal on the central peninsula; and Cotai Water Jet, which runs to the Taipa terminal.