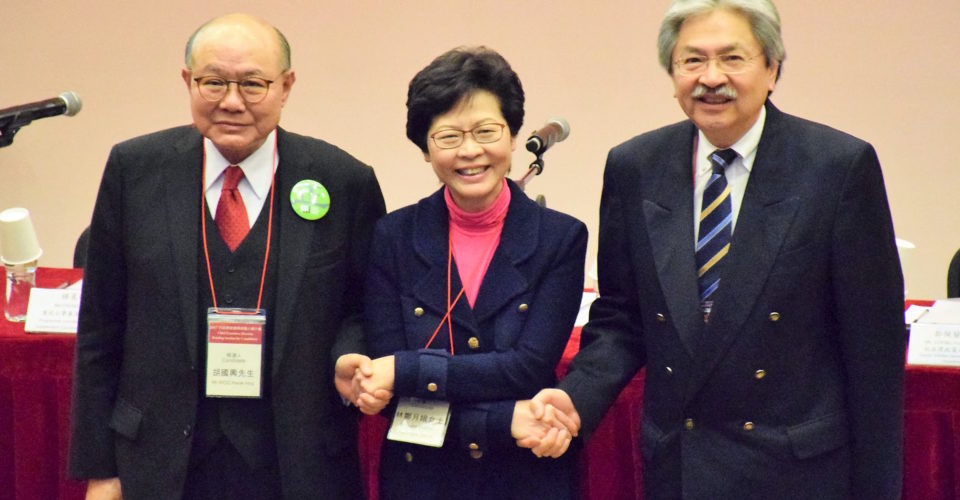 As we approach the chief executive elections on March 26, 2017, The Loop HK takes a closer look at the candidates in the race.

Our current chief executive, CY Leung, will not be completing a second term. He will be formally stepping down on June 30, 2017.

Like many elections, Hong Kong’s is not at all a straightforward affair. The CE is selected by a 1,200-strong Election Committee which consists of a mix of representatives from industry and labor groups as well as Legislative Council members, and those under a Chinese government advisory body. The committee is often criticized for being heavily vetted by Beijing.

But back to the CE race: Candidates must first secure 150 nominations from members of the Election Committee before they can enter. Former lawmaker and New People’s Party co-founder Regina Ip Lau Suk-yee, and Legco member and League of Social Democrats co-founder “Longhair” Leung Kwok-hung dropped out after they were unable to rack up enough nominations to participate.

That leaves us with our three candidates: Carrie Lam Cheng Yuet-ngor, John Tsang Chun-wah and Woo Kwok-hing. On election day, the candidate who secures 600 votes in the first round will win. If it comes to a draw, the top two candidates will race to clear 600 votes. Carrie Lam quit her role as Hong Kong’s chief secretary in January when she announced that she would be running for the top job, despite previously commenting that she would retire. The conservative politician has pro-Beijing leanings and was the second-highest ranking official in the city. In her 36 years in public service, Lam has held a number of major roles in government, including as permanent secretary for home affairs and secretary for development.

Despite relative popularity during her time in government, Lam came under fire for various controversies, including the “lead-in-water” scandal that dominated headlines in 2015. After heavy metal was found across housing estates in Hong Kong, Lam was the only principal official not to offer an apology. More recently, Lam was put on blast after she announced plans to build Hong Kong’s answer to Beijing’s Palace Museum at the West Kowloon Cultural District, without having undergone public consultation.

However, Lam is considered the most popular candidate in the running, thanks to her experience and the fact that she had worked closely alongside CY Leung. John Tsang, nicknamed “Mr Pringles” (see above — this cannot be unseen), has worked in government for over three decades. Like Carrie Lam, Hong Kong’s longest-standing financial secretary announced his intentions to run for CE this year, stepping down from his post in January.

Educated in the US, Tsang worked as an architect before eventually returning to Hong Kong to work in public service. Among the roles he held, he has been private secretary to Hong Kong’s last colonial governor, Chris Patten, as well as commissioner of Customs and Excise. After working as director of the Office of the Chief Executive with former CE Donald Tsang in office, he was appointed financial secretary in 2007.

During his time in the role, Hong Kong saw fairly stable economic growth. Tsang was also responsible for a scheme in 2011 that saw every adult permanent resident receive a tax rebate of $6,000.

Tsang is no stranger to gaffes, though. In 2013, he remarked that he understood the middle class because he was a member of it himself — adding that the middle classes were people who “drank coffee and liked French films,” prompting ridicule. In 2015, he came up with the idea of launching food trucks in Hong Kong, despite the government’s strict and unforgiving policies on existing street food hawkers.

Tsang is in the pro-Beijing camp and has conservative leanings.

Former vice-president of the Court of Appeal, High Court; former chairman of the Electoral Affairs Commission Retired judge Woo Kwok-hing is no stranger to the electoral process, having handled all three of Hong Kong’s previous Chief Executive elections as chairman of the Electoral Affairs Commission.

With a string of judicial appointments under his belt, Woo was also responsible for several independent inquiries and was at one point a commissioner of Interception of Communications and Surveillance. He retired from the judiciary in 2011, although he remained a deputy judge until 2016, when he announced that he was running for chief executive.

Considered moderate in his political stance, Woo is backed by pro-democratic electors. He’s big on political reform, though he’s also the candidate with the least experience in public administration out of the three.

Woo doesn’t seem like an obvious candidate to be favored by the Central government, although let’s not forget that he was able to garner enough nominations — 179 to be exact — from pro-democratic members on the Election Committee.