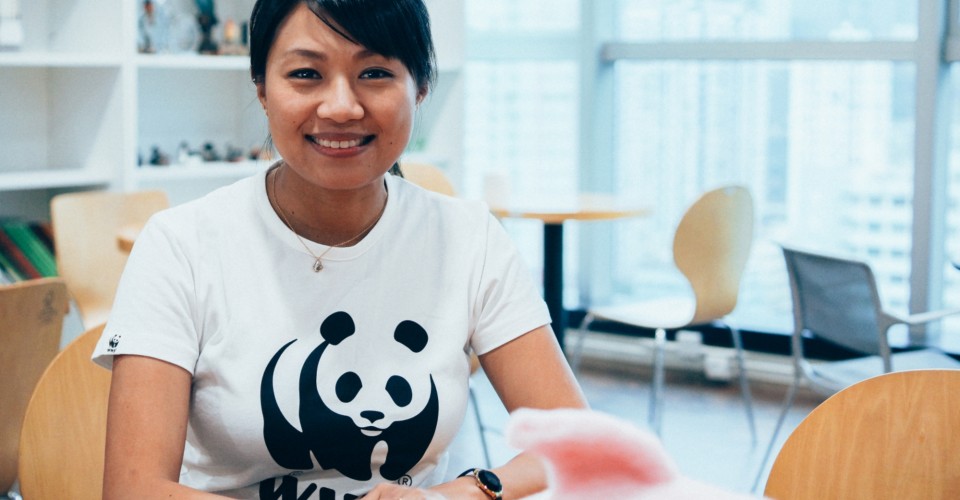 As Hong Kong continues to reclaim land and develop new infrastructure year after year, the number of Chinese white dolphins has plummeted by 60 percent over the past decade. The WWF-Hong Kong‘s assistant conservation manager Samantha Lee says that a string of development projects threaten the dolphins’ existence in Hong Kong waters.

Lee graduated from Chinese University where she studied coral ecology. She worked at an international environmental consultant company for two years, but felt there was more hands-on work to be done in Hong Kong. She has been a marine conservation advocate with WWF for six years, where she looks after local marine projects such as sustainable fisheries development, pink dolphin conservation work, and protected areas projects.

5 things you need to know, according to Lee

We have very rich biodiversity in Hong Kong — we have 84 species of coral and actually over 1,000 marine fish species, which is more than they have in the Caribbean! When I talk to dolphin experts they say that Hong Kong is like a battlefield: it’s so small and there are so many marine species to protect but there are so many development projects coming up that it’s really scary.

There are so many development projects, like the Third Runway, Hong Kong–Zhuhai–Macao Bridge, and new housing developments going up all the time, and these projects are all threatening the future of the marine life in Hong Kong, in particular the Chinese white dolphins.

In 2003 we had 158  dolphins in Hong Kong, but now because of marine traffic, dredging, water pollution, and development we only have 61. When you compare this to the numbers 10 year ago, it is a 60 percent drop. It is very worrying.

3. Mitigation efforts have been too lax

We are really upset, because in the very beginning of the Hong Kong–Zhuhai–Macao Bridge project, the environmental report said that after implementing some mitigation measures, the impact would be minimized and it wouldn’t affect the dolphins much — but this didn’t turn out to be true.

Since the development started in 2013 the dolphin numbers have been declining and no dolphins were spotted in that area for almost an entire year. We have been talking to the government to implement more measures, but it’s too late in a way, because the dolphins are already avoiding the area.

This project proves that more stringent and also scientific-based mitigation measures will be needed in the future so that we can minimize the impacts to the dolphins and their habitats.

4. The Macau Bridge is just the beginning

We are also concerned about the Third Runway construction because this project is going to be the second largest reclamation project in Hong Kong. The reclamation size will be about four times more than the Hong Kong–Zhuhai–Macao Bridge and the construction period will be six to eight years longer.

We are worried that the destruction of the habitat and also the marine traffic from the work barges, and the high speed vessels, will pose a more negative impact on the dolphins and we worry that they will disappear because of the project.

5. We’re part of the problem too

When you walk along the seashore or the beach you can see all the litter on the beaches and across the rock — it’s really sad. There is a lot of marine debris in the sea and the animals sometimes accidentally eat it, so we can also try to reduce consumption and waste of plastic bags and materials. Reducing the amount of litter we create will help not to cause such harmful effects to marine life.

A lot of people go on dolphin-watching boats tours, like the ones in Tai O. But sometimes the small boats don’t follow a code of conduct, so they will chase after the dolphins at high speed and get too close to the animals.

Several studies show that the dolphins demonstrate some avoidance behaviors because of the boats and even they get injured — you can see cuts on their dorsal fins or on their body. We have been working on a project in Tai O to raise awareness about these issues among the boat operators as well as tourists.

We have already observed some positive attitude and behavioral changes of the boat operators. We hope that the impacts from dolphin watching activities could be alleviated one day.

We are not opposed to all development but we think there is a way to conserve the habitat first, and then have the development in a less ecologically important area so we have a balance of preserving and protecting the sea while certain kinds of developments can also coexist.

We have to be proactive, rather than reactive. We have to be precautionary so that we can keep the marine life for not just our generation, but also the future generations. It’s important that we fight this battle.

Over the years, I can see that the awareness of marine conservation has increased quite a lot. We encourage everyone to speak up for the dolphins. The public’s comments are really important for the government’s consideration and the more people who speak up, the easier it is to fight for the dolphins.